Getty Jordan Mills #79 of the Buffalo Bills excites the crowd after being ejected during the third quarter against the Miami Dolphins at New Era Field on December 30, 2018.

Former Buffalo Bills offensive tackle Jordan Mills, 31, has found a new home for the 2022 NFL season. The veteran lineman, who spent four seasons with the Bills between 2015 and 2018, is taking his talents to the NFC West.

Originally selected by the Chicago Bears in the fifth round of the 2013 NFL draft. He spent two seasons with the Bears before the team hired new head coach John Fox, and was subsequently released by the team. Mills was claimed off waivers by the Dallas Cowboys but suffered a foot injury before the 2015 NFL season started, and was released a week later. 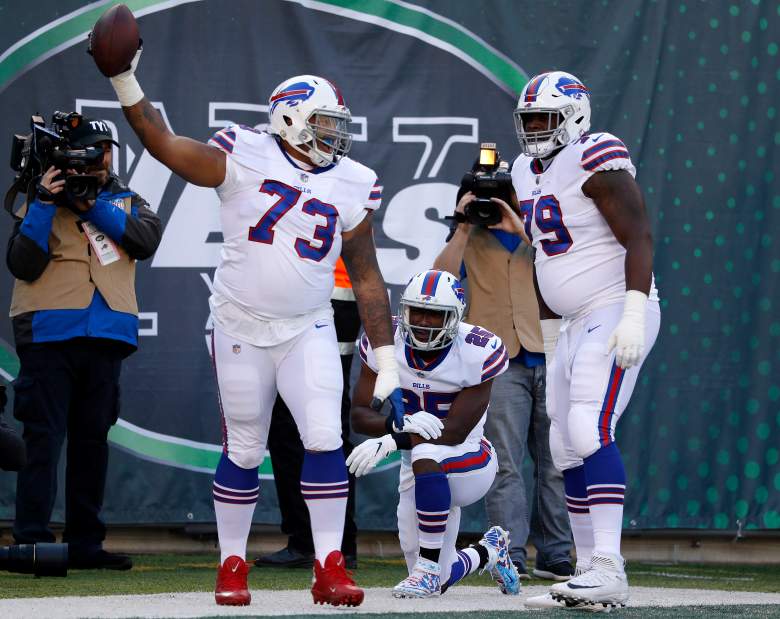 After a brief stint on the Detriot Lions’ practice squad, the 6-foot-5, 315-pound Louisiana Tech alum signed with the Bills, where he appeared in 10 games with five starts. Buffalo re-signed Mills in March 2017 to a two-year, $4 million contract. He appeared and started in all 16 games of both the 2017 and 2018 NFL seasons, but wasn’t re-signed after his contract ended.

Mills bounced around the league over the next few years, including stints with the Miami Dolphins, Arizona Cardinals, and a return to the Cowboys before signing with the Baltimore Ravens practice squad in January 2021.

In 2021, Mills signed with the New Orleans Saints and was elevated to the active roster in late October, a move which he called “a dream come true” in an interview in December 2021.

“Being a young kid from a small town in Napoleonville, Louisiana, about an hour outside of New Orleans, (my family) would always come home from church and watch the Saints play at 12:00,” Mills said. “I always wanted to get the chance to play in the Dome on this field, but I never got the chance in high school or college.

“Just being able to be here and actually step on this field playing for my home state team is indescribable. It’s a priceless feeling with everyone in my family back home supporting me. Just them being happy for me being on the team, but to actually be a New Orleans Saint is special.”

Throughout his career, the veteran has made 100 game appearances, per Pro Football Reference, and 87 starts.

The Bills projected starting offensive lineup, Mitch Morse, Rodger Saffold, Ryan Bates, and Spencer Brown has yet to practice together. On the first day of training camp, Bills head coach Sean McDermott revealed Pro Bowler Saffold was being placed on the non-football injury list after injuring his ribs in a car crash.

The Bills have Saturday off following their annual “Red & Blue” practice which took place at Highmark Stadium on Friday, August 5. On Sunday, the Bills will resume what will be the third week of training camp at St. John Fisher University.