Getty Jordan Poyer #21 of the Buffalo Bills was unable to finish the game against Green Bay Packers at Highmark Stadium on October 30, 2022.

While the Buffalo Bills defeated the Green Bay Packers 27-17 on Sunday Night Football, there was a stark contrast between how the team played in the first and second half. Aside from quarterback Josh Allen’s two interceptions, the Bills lost safety Jordan Poyer, who exited the game after re-injuring his elbow in the third quarter.

Poyer was attended to by trainers between the third and fourth quarter after getting shaken up on the play, per One Bills Live host Chris Brown, and was officially ruled out with about nine minutes left in the matchup.

Here's the last play of the third quarter where #Bills Jordan Poyer appeared to injure something. Lands on his right arm.

Was talking to trainers in between quarters per reports. Don't have a clear idea of what happened from this angle. pic.twitter.com/6ze88ctxjx

While Jaquan Johnson stepped in for Poyer, the All-Pro’s absence was felt immediately. During Green Bay’s following drive, Packers quarterback Aaron Rodgers found Samori Toure for a 38-yard touchdown. Buffalo still came out victorious, and are now 6-1, the team’s best start to a season since 1993, but the final score against Green Bay (3-5) doesn’t quite reflect how close the game was at the end, and losing Poyer for an extended period of time is worrisome.

Jordan Poyer says his elbow injury “sounded like a pop.” Says he is trying to remain positive and will meet with the medical staff tomorrow. #Bills #BillsMafia @Batavia_Daily pic.twitter.com/Z5M8ujUufp

Poyer hit the X-ray room after the game, but he will require further testing to determine the severity of the injury. The veteran’s message to reporters afet the game was a far cry from the positive message he sent after requiring an X-ray on his ribs back in Week 4. WGR 550’s Sal Capaccio tweeted, “Poyer said it ‘felt like a pop’ in his elbow and will wait until tomorrow to see what the MRI says. Says he staying positive about it and it’s just frustrating with some of the injuries that have happened to him this year.”

ESPN‘s Alaina Getzenberg added, “Poyer said that hopefully the MRI tomorrow is positive…. and that it’s different from the injury in camp.”

Poyer previously suffered a hyper-extended elbow following a training camp collision that kept him sidelined for several weeks. On August 2, AP Sports writer John Wawrow reported that the All-Pro needed assistance to exit the field. Wawrow tweeted, “Poyer stopped beneath the tunnel to await a cart. Heavily holding his left arm. Gets in the front seat and driven off.” 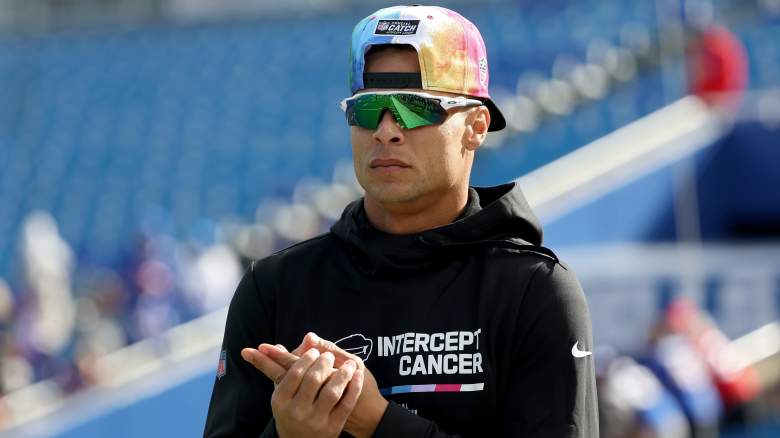 GettyBuffalo Bills safety Jordan Poyer #21 looks on before a game against the Pittsburgh Steelers at Highmark Stadium on October 09, 2022 in Orchard Park, New York.

Poyer missed the Bills’ game against the Miami Dolphins due to a foot injury, which remains Buffalo’s only loss of the season heading into Week 9. Against the Baltimore Ravens in Week 4, Poyer stepped up big time, catching two interceptions, his first two-pick game in the NFL, and six tackles. However, immediately after the game, Poyer went straight to the X-ray room for a rib injury.

Poyer remains one of the toughest guys on the team, he literally drove 15 hours to Kansas City in order to play against the Kansas City Chiefs in Week 6 after he was not medically cleared to play due to a rib injury. Hopefully, the MRI results on Monday brings good news.

While the Bills are reportedly in the market for a running back before the NFL’s November 1 trade deadline, as they inquired about Christian McCaffrey before he ultimately landed with the San Francisco 49ers, and recently called the New Orleans Saints to see if five-time Pro Bowler Alvin Kamara was available. However, if Buffalo can’t rely on Poyer to start, and with fellow All-Pro safety Micah Hyde on IR, they might pivot their search to find another veteran safety.

WGR 550 host Nate Geary tweeted on Sunday, “I like what I saw from Cook/Singletary tonight. Not sure it officially puts the ‘trade for a RB’ conversation to bed. But, I think if they’re making a move, finding another piece at safety might be their best move.”