After the Buffalo Bills punched their ticket to the next round of the playoffs after defeating the Miami Dolphins 34-31 in the Wild Card round on Sunday, January 15, safety Jordan Poyer was able to watch live as the Dallas Cowboys destroyed quarterback Tom Brady and the Tampa Bay Buccaneers on Monday Night Football.

During the Cowboys’ 31-14 victory, Brady completed 35-of-66 passes for 351 yards, two touchdowns, and one interception. While the seven-time Super Bowl champion has not yet decided if he’ll return to the NFL for his 24th season, Poyer offered some blunt advice to the 45-year-old superstar during the latest episode of his podcast.

“Tom, you know I love you, and I feel like I’ve been riding for you all year,” Poyer said. “Early on, you can go back to my podcast, I said you can’t count Tom out. And sure as s*** he made the playoffs. You did everything you could’ve did in this league. I understand you love this game. Go be with your kids, man.”

"Go be with your kids, Tom"

“I didn’t like watching that game. It was hard to watch. You’re down 27-0 at halftime,” Poyer said, exaggerating a bit since the score at halftime was 17-0.

“He was defeated. You could see he was defeated,” the All-Pro safety continued. “I still think he obviously knows everything about everything, the insides and out of football. But it does take 11 to play the game. Go be with your kids, Tom. I appreciate everything you’ve done in this league. I got two picks off of you, one to the crib. Lost both games. I’m 0-11 against you. Yes, please go. Go be with your kids, Tom.”

While Poyer, 31, is not alone in thinking Brady should retire, not everyone appreciated his unsolicited advice. One fan responded, “What I don’t understand is people saying go be with your kids, you can play football and spend time with your kids, a lot of Parents work 50+ hours a week and still have time to spend with there family and Tom gets 6+ Months off a year so it just makes zero sense.”

Several people urged Poyer to stay in his lane. One person wrote, “I can’t wait for Brady to reply and say, ‘Who the heck is this clown giving him advice?’ Poyer is wayyy out of his place with these comments,” while another fan tweeted, “Why Poyer acting like he know the man well?”

Other people couldn’t criticize Poyer because they agree it’s past time for Brady to retire. BroBible tweeted, “Maybe Tom Brady should take the free advice,” while a Bills fan wrote, “He’s just saying out loud what we’re all thinking.”

If this was Brady’s last season, it would be the worst one of his career. Since getting drafted in the sixth round of the 2000 NFL Draft, this was his first season with a losing record (8-9).

Bills quarterback Josh Allen has always been open about how much he admires and respects Brady, as this was the star player the 26-year-old looked up to as a kid in Firebaugh, California. While Allen was dubious that the three-time NFL MVP was actually done playing last year — Brady ultimately un-retired after 40 days — the Bills star worries that this might actually be it for him.

"The way that [Brady] talked in his press conference last night… it seemed a little too sentimental for my liking in terms of holding onto the belief that he's going to continue to play."@JoshAllenQB on whether he thinks Tom Brady will retire.

During an appearance on “Kyle Brandt’s Basement” earlier this week, Allen said Brady’s postgame presser was “too sentimental” for his liking. “When it happened last year and he retired, I told people ‘I’ll believe it when he’s not playing the first game,'” Allen told Brandt. “But, the way that he talked in his press conference last night, it seemed a little too sentimental for my liking in terms of, you know, holding onto the belief that he’s going to continue to play.

“But, we’ll see. It’s up to him and the people in his life around him, and how he’s going to take that decision into his own hands, but I know there’s gonna be teams calling.”

Here's the video of how Tom Brady ended his press conference tonight: pic.twitter.com/bUHKJgSOmY

NFL Insider Jordan Schultz offered the latest insight into Brady’s decision making process on Friday, January 20. During an appearance on “The Pat McAfee Show.” Schultz said, “Brady wants to take a month or two to evaluate everything before making his decision,” while also noting he’d “be surprised” if the veteran retired.

Should Brady decide to hang up his cleats for good, he has a standing offer to become a FOX Sports lead analyst. The New York Post‘s Andrew Marchand reported back in May that FOX CEO Lachlan Murdoch offered him a 10-year deal worth $375 million to become the face of the network’s NFL coverage.

Brady Could Return to the AFC East 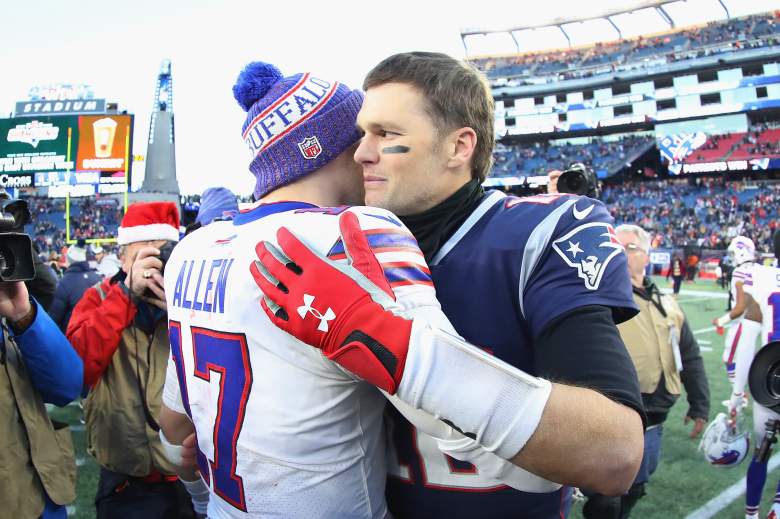 GettyJosh Allen #17 of the Buffalo Bills and Tom Brady #12 of the New England Patriots meet on the field at Gillette Stadium on December 23, 2018.

If Brady doesn’t retire, he will have a selection of offers to sort through heading into the offseason as a free agent. While it seems unlikely Brady returns to Tampa Bay, speculation over where he could end up next is already dominating headlines.

The Las Vegas Raiders have popped up as a great fit due to the Josh McDaniels connection and knowing quarterback Derek Carr will be released or traded, while CBS Sports analyst Cody Benjamin named several potential suitors, including the Washington Commanders, the San Francisco 49ers, and all three of the Bills’ AFC East rivals. Benjamin suggested Brady could not only land with the Dolphins or Jets, but didn’t rule out a return to the Patriots.