Getty Jordan Poyer #21 of the Buffalo Bills smiles after a win over the New York Giants at MetLife Stadium on September 15, 2019 in East Rutherford, New Jersey.

Even though there are just five days before the Buffalo Bills kick off the 2022 NFL season with a primetime matchup against the Los Angeles Rams, an NFL analyst predicts the team will make one more “bold” move before Week 1, and cut ties with safety Jordan Poyer.

Bleacher Report‘s Brent Sobleski wrote on Saturday, September 3 that the Bills should seriously consider trading the 31-year-old to the New York Giants, especially since it seems the front office isn’t willing to meet his contract extension demands.

In the proposed deal, the Bills would receive both a fourth-round and a fifth-round pick from the 2023 NFL Draft. Sobleski wrote, “Poyer is a first-team All-Pro and wants to be paid like one. The 31-year-old is also heading into the last year of his current contract.  In any contract negotiation, teams are paying for what a player will do in the future, not what he’s already done. Since Poyer is about to enter the 2022 campaign without a new deal, the Bills should consider moving the versatile defender.”

After publicly campaigning for a new contract, Poyer brought his agent, Drew Rosenhaus, to training camp, but no new deal has come to fruition. Bills general manager Brandon Beane was asked during a press conference on September 1 about the status of Poyer’s extension, “No update. That’s probably the best I can say,” he said, per ESPN’s Alaina Getzenberg.

Sobleski notes that the proposed trade is not a knock on the safety’s talent. “The Bills fielded the league’s No. 1 defense last season, and Poyer was a big part of that. He and Micah Hyde are aging veterans, though, and the transition at safety will start sooner or later. The Bills could move Jaquan Johnson into the lineup, and he can provide a physical presence along the backline.  Meanwhile, the New York Giants could use a veteran leader like Poyer. Xavier McKinney is already the on-field defensive play-caller, but he and Poyer could be interchangeable pieces to create significant flexibility for Don Martindale’s defense.”

In March 2020, the Bills signed Poyer to a two-year extension worth up to $19.5 million with $8.5 million guaranteed, per Spotrac.com. As it stands, Poyer has a $10.7 cap hit for the 2022 NFL season, the sixth-highest on the team, and is set to make $5.6 million in base salary during the final year of his contract.

While the Giants have even less cap space available than the Bills, Sobleski wrote, “A few reworked deals coupled with a long-term extension (and low initial cap hit) for Poyer just might do the trick.”

However, Poyer, who USA Today‘s Doug Farrar ranked as the No. 1 safety in the NFL heading into the 2022 NFL season, remains optimistic a new deal will get done.

“Like I said, I’m just here — I want to continue to play football and continue to play my best football here in Buffalo for as long as I can, for however long that may be,” he said on August 29, per The Athletic’s Joe Buscaglia. “But, I’m here with the guys right now and ready to attack this season.” 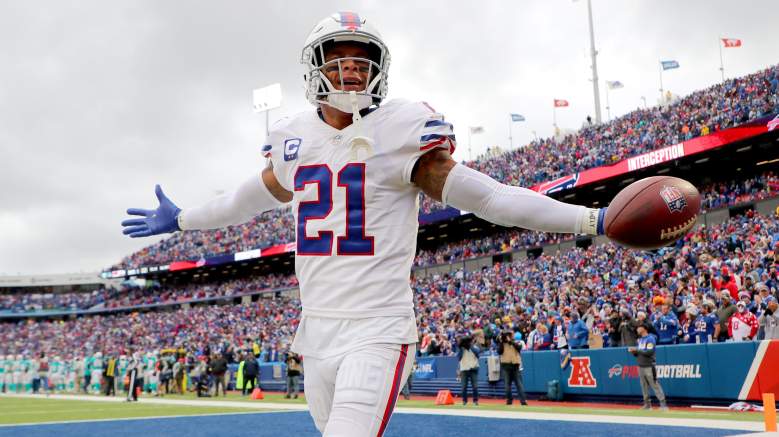 GettyJordan Poyer #21 of the Buffalo Bills celebrates after making an interception in the fourth quarter against the Miami Dolphins at Highmark Stadium on October 31, 2021.

While it’s difficult to imagine Buffalo sending away a core member of their defense before the season starts, Sobleski noted that Poyer would have several familiar faces in the Meadowlands if he were to be traded. After former Bills executive, Joe Schoen, became the Giants’ general manager, and former offensive coordinator Brian Daboll was named head coach, Buffalo’s former offensive line coach Bobby Johnson followed them to New York, as did several players, including veteran lineman Jon Feliciano, and quarterback Davis Webb.

While Webb was cut and re-signed to the Giants’ practice squad another former Bills quarterback, Tyrod Taylor, is set to be starter Daniel Jones’ backup.

Over the past few weeks, the Giants have scooped numerous former Bills players including two cornerbacks Olaijah Griffin, and Nick McCloud. Though he was not a recent cut, Jack Anderson, Buffalo’s seventh-round pick from the 2021 draft, also signed with the Giants last week.

Poyer suffered an elbow injury during training camp on August 2 that caused him to miss the entirety of the Bills’ preseason.

The veteran spoke out about the setback last week, as reported by Spectrum News 1 Buffalo’s Jon Scott. Poyer said that “he’s never experienced pain like he did injuring his elbow in training camp. That includes when he suffered a lacerated kidney. Got so excruciating that he became nauseous while trying to walk back to locker room and had to sit down before taking cart.”

However, Poyer is confident that he’ll be able to start Week 1 when the Bills take on the reigning Super Bowl champs at SoFi Stadium on September 8.

Jordan Poyer continues to show some progression in his 2nd straight practice back from injury pic.twitter.com/m1gk6Ok0li

“I expect to be out there, as long as there’s no setbacks,” Poyer said on August 29. “It feels really good right now, I’ll continue to work every single day to try to get to 100% for the first game.”