Getty Josh Allen #17 of the Buffalo Bills rushes against the New York Jets during the first half at MetLife Stadium on November 06, 2022 in East Rutherford, New Jersey.

The Buffalo Bills fell to 6-2 after taking a brutal 20-17 loss to the New York Jets on Sunday, November 6. While it was painful to watch the Bills’ offense fall completely flat against their AFC East rival, the most concerning moment took place late in the fourth quarter, when quarterback Josh Allen grabbed his throwing arm in pain.

Allen appeared to hurt his right arm and/or elbow after getting strip-sacked by Jets defensive lineman Bryce Huff. While all of Bills Mafia collectively held their breath waiting for an update, Allen thankfully shared some positive news during his postgame press conference.

“Slight pain but I’ll get through it,” Allen said, per News 4 Buffalo‘s Heather Prusak. NFL Network‘s Mike Garafolo added that Allen was “not overly concerned about his arm.”

Allen seemed way more concerned with his less-than-stellar performance, putting the Bills’ loss squarely on his shoulders. “It’s tough to win in this league when you’re playing a good team and your quarterback plays like sh**,” Allen said. “I made some bad decisions tonight that cost our team. A lot to learn from, a lot to grow from,” Allen added. “That’s not the standard we hold ourselves to. Not the ball that we play.”

The Wyoming alum looked incredibly defeated during the post-game presser. The Athletic‘s Joe Buscaglia tweeted, “Allen remained sitting in his locker stall for some time after his press conference, with a long stare. Clearly not happy with how today went against the Jets.”

"It's tough to win in this league when you're playing a good team and your quarterback plays like shit."

Allen’s teammates, however, refused to let Allen take full responsibility for the loss. Offensive tackle Dion Dawkins said after the game, “I would do anything for Josh. I would kill for Josh. I would give my last finger to Josh… Josh is saying that to protect us.”

Wide receiver Stefon Diggs added, “Turnovers are gonna happen, you know what I’m saying? Our quarterback is the best quarterback in the league. To me, he can’t do no wrong. Of course, he’s gonna be hard on himself. So, from my lens, it’s like we can do some things better. But form your own way. It starts with your 1/11th. I gotta do my job the best way I can, and I’ll start there.”

I just saw the replay. I didn't realize how close they were to actually connecting on that last play. pic.twitter.com/NBQpH41IUZ

Despite grimacing in pain, Allen was still able to chuck the ball downfield with less than a minute left in the fourth quarter. While Allen’s third down throw was incomplete after the Bills recovered the ball on the strip sack, his fourth-down hail mary throw intended for Gabe Davis could’ve sealed the win for Buffalo, but Jets cornerback Sauce Gardner’s aggressive coverage kept the receiver from catching the ball.

“Didn’t put my hands where they were supposed to be. Josh threw a great ball. It’s all on me,” Davis told reporters after the game.

Twitter Strongly Reacted to Allen Grabbing His Arm in Pain 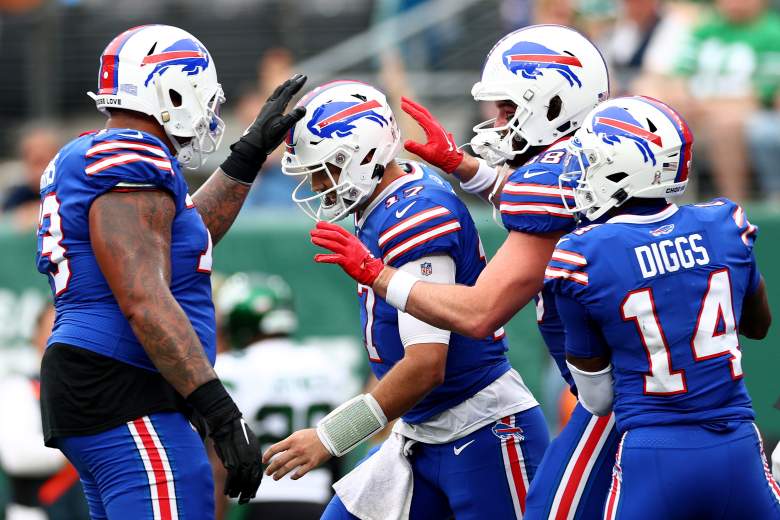 GettyJosh Allen #17 of the Buffalo Bills celebrates with teammates after rushing for a touchdown against the New York Jets during the second quarter at MetLife Stadium on November 06, 2022 in East Rutherford, New Jersey.

Seeing the Bills’ $258 million star grab his arm in pain set Twitter afire with concern. One person tweeted, “Josh Allen’s arm isn’t right. F***, hope he’s alright,” while another person wrote, “Allen ran the ball really well. But that was his worst game passing the ball in a while. Hopefully, his arm is alright.”

Buffalo #Bills QB Josh Allen appeared to suffer an injury to his throwing elbow in their Week 9 loss to the #Jets. @ProFootballDoc gives his instant analysis 👇👇👇

Sunday’s game marked the first matchup of the 2022 NFL season that Allen didn’t score a passing touchdown. USA Today‘s Bradley Gelber tweeted “Not sure if Allen is hurt or what is going on but the regression of late seems to be more than just mental errors. Especially given the MVP level he was consistently at going into last week’s second half.”

Allen wasn’t the only person to take the blame for the Bills’ loss. Head coach Sean McDermott said after the game, “Overall start with myself I gotta do a better job putting them in position, overall we didn’t play well enough to win today, that starts with me.”

As for Allen’s arm, “I’m aware of it, but as far as I know, he’s still being evaluated,” McDermott said, noting that he hadn’t spoken to the medical staff yet, per Buffalo Rumblings.

Buffalo will look to turn things around in Week 10 against the No. 1 team in the NFC North. Next up, the Bills will host the Minnesota Vikings (7-1) on Sunday, November 13 at 1 p.m. ET.

Loading more stories
wpDiscuz
0
0
Would love your thoughts, please comment.x
()
x
| Reply
Bills quarterback Josh Allen speaks to the media after injuring his arm late in the fourth quarter against the Jets.