Getty Quarterback Josh Allen #17 of the Buffalo Bills looks to pass during the first quarter of the NFL game against the Los Angeles Rams at SoFi Stadium on September 08, 2022 in Inglewood, California.

While Buffalo Bills quarterback Josh Allen prepares to take on the Tennessee Titans on Monday Night Football, his father, Joel Allen, and his mother, Lavonne, visited their son’s alma mater, Wyoming University, for their game against the Air Force on Friday, September 16.

Allen’s parents didn’t just travel to Laramie to watch the Cowboys take on the Falcons, Joel was in attendance to sing the National Anthem before kickoff. Both Joel and Lavonne rocked Allen’s No. 17 jersey at War Memorial Stadium for the pre-game show, a video of which quickly went viral on Twitter.

Fans strongly reacted to Allen’s father’s performance, as most people had no idea Joel had any vocal talent. “What lol was expecting that not at all,” one person tweeted, while WGRZ reporter Robert Hackford retweeted the video and wrote, “A father of many talents = a son of many talents.”

A member of Bills Mafia loved Joel’s performance so much that he tweeted, “Get this guy at Highmark!” to which another fan replied, “That would be epic!!”

Other people struggled to get over the level of talent in the Allen family. “Is there anything these people can’t do??? Nope,” one viewer tweeted, while another person wrote, “This family is good at everything.”

#Wyoming still 💙 @JoshAllenQB! Your dad did a great job singing the national anthem at the big game last night, Josh. Thanks for never forgetting where you came from, & for your parents still supporting UW football! 🤠🏈💪 pic.twitter.com/nVrF6zfH05

Joel must’ve been a lucky charm because even though the Cowboys entered the game as 16.5-point underdogs, Wyoming came out victorious with a 17-14 win.

Allen is close with his father and credits Joel for his strong work ethic. The former No. 7 overall pick from the 2018 NFL Draft told ESPN’s Mark Schlabach in December 2017, “Seeing my dad wake up super early when the sun wasn’t even out and then coming home when the sun was set, he worked his tail off to provide for our family and did a great job. He’s the most selfless man I know, and I think if I’m half the man he is, I’ll be all right in this world.”

Allen Transferred to Wyoming After Spending 1 Year at Junior College

Allen didn’t receive much national attention as a high school senior. He spent a year at Reedley, a community college about 75 minutes away from Firebaugh, California, before earning a Division I scholarship to play at Wyoming, where he grew into the 6-foot-5, 237-pound powerhouse that he is today.

At Reedley, Allen threw 25 touchdowns with just four interceptions, but still, no recruiters came knocking. He then personally sent out “about 1,000 emails to every head coach, coordinator and position coach across the country, essentially begging for a chance,” Allen told Democrat & Chronicle‘s Sal Maiorana in July 2018, a few months after he was selected by the Bills as their No. 7 overall pick.

Just two schools replied to Allen’s email, Wymoing and Eastern Michigan. Crazily enough, Wyoming head coach, Craig Bohl, was only able to offer Allen a scholarship because a high school standout from Oregon, Eric Dungey, whom he thought was locked in, decided last minute to attend Syracuse instead.

Allen helped lead Wyoming to the 2016 Mountain Division title during his sophomore year, during which he threw for 3,203 passing yards along with 28 touchdown passes, seven rushing touchdowns, and one receiving.

During his junior year, the future Bills star missed two games due to a shoulder injury but helped the Cowboys offense to become ranked No.1 in the Mountain West Divison. He finished the season completing 152-of-270 passes for 1, 812 yards and 16 touchdown passes, and five rushing scores. During his final college game in the Idaho Potato Bowl, he helped Wyoming win 37-14 and earned the honor of Most Valuable Player.

Buffalo Has Lost the Past 2 Matchups Against the Titans 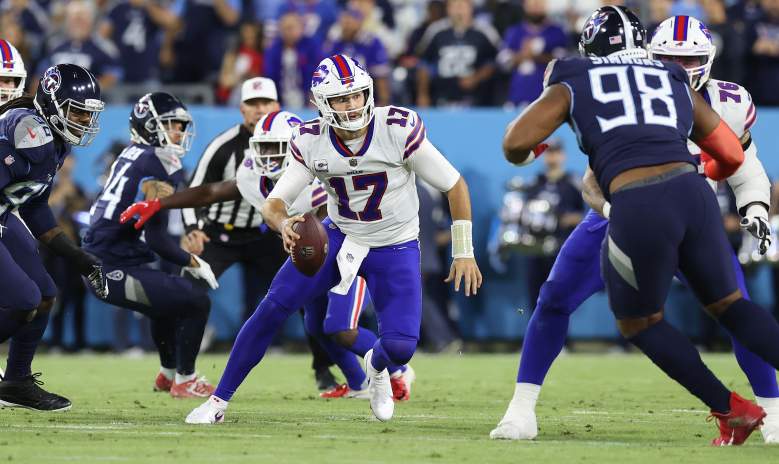 GettyJosh Allen #17 of the Buffalo Bills against the Tennessee Titans at Nissan Stadium on October 18, 2021 in Nashville, Tennessee.

After a pit stop in Wyoming, Allen’s parents will likely be in Buffalo for the team’s home opener against the Titans on Monday, September 19. While the Bills enter Monday Night Football as 9.5-point favorites, the 26-year-old quarterback is staying alert.

Part of the reason Buffalo is so highly favored to beat Tennessee is that the latter was stunned by the Giants in a 21-20 upset after being up 13-0 at halftime in Week 1. Titans kicker Randy Bullock had a chance to win the game but missed a 57-yard field goal as time expired.

Over the past four games Buffalo has played Tennessee, they’re tied 2-2, however, the Titans have won the past two matchups. In their most recent tilt last season, the Titans entered the game as 6-point underdogs and defeated Buffalo 34-31.

“They’re guys that are just taught the right things in football and coach (Mike) Vrabel can motivate those guys to really play at a higher level,” Allen said of the Titans. “And I’m assuming that’s what it’s going to be Monday night. Again, it’s Monday night and coming off the game that they just had, they’re going to be ticked off.”