Shortly before the Buffalo Bills playoff game against the Cincinnati Bengals kicked off on Sunday, January 22, quarterback Josh Allen’s girlfriend, Brittany Williams, showed support for her man on Instagram.

Perhaps, Williams saw Allen’s comments during a press conference earlier this week about not being able to compete with Bengals quarterback Joe Burrow‘s pregame style. “Oh no,” Josh Allen said when asked if he’ll top Burrow’s outfit. “He’s gonna win that battle 10 times out of 10. I don’t dress to impress on game day just kind of walk in the closet and pick whatever I see first.”

After seeing Allen’s agency share photos of his entrance to Highmark Stadium, during which the 26-year-old superstar was simply rocking a grey hoodie, black pants, and a Bills hat, she reposted the pictures on her Instagram stories and wrote, “Sexy.” 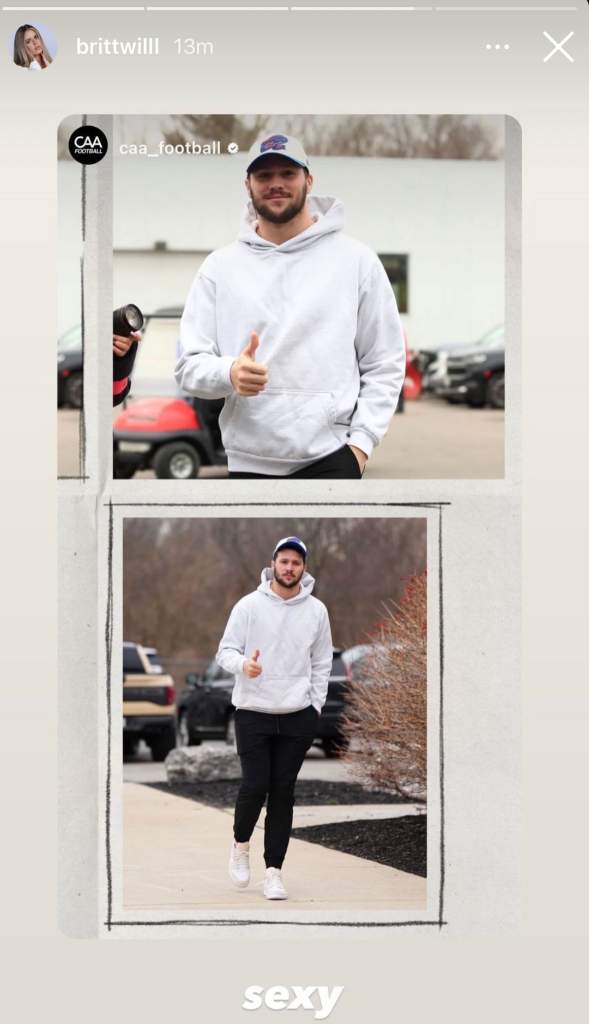 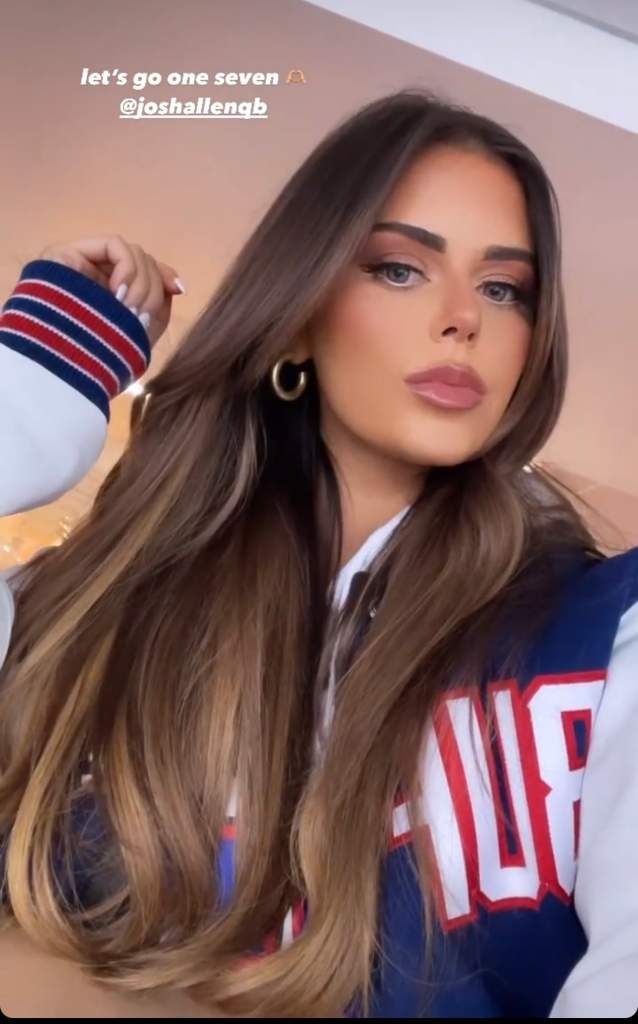 @brittwilll/InstagramJosh Allen’s girlfriend shares a game day selfie ahead of kickoff on January 22, 2023.

During an appearance on Kelly Stafford’s The Morning After podcast before the season started, Williams revealed her simple schedule before heading to Highmark Stadium on game day. “For home games, I wake up go to Starbucks. Get a coffee and go home. And then head to the stadium,” Williams said.

Allen, however, has a very different type of routine on game days, one that’s much more complicated. While appearing on the Bills Pod Squad last year, the Wyoming alum opened up about his strange rituals.

“I throw up before every game,” Allen noted. “I’m not nervous or anything like that. I did it one time, and I’ve done it ever since.”

Williams Said There’s No Rush to Get Married 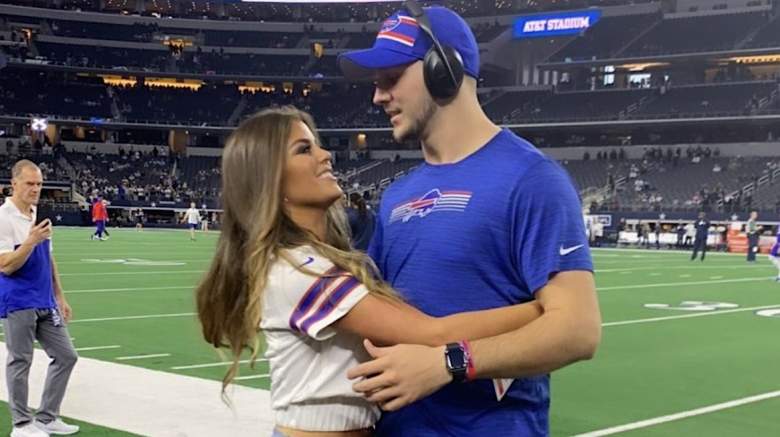 Williams, who’s known Allen since they were children and have dated since college, also addressed the question of marriage while appearing on Stafford’s podcast back in September.

“What me and josh always say: ‘What’s understood doesn’t need to be explained.’ Like we understand what we have. Everyone around us are going to say this, say that. When you’re married, when’s the baby coming. When have your baby, when’s the next baby coming. So we just always say that. We have a great thing going.

“Like you said, quarterbacks are so focused and so different in the sense of the way they think,” she told Stafford, who’s married to Rams quarterback Matthew Stafford. “That comes first in their mind and I totally understand that. Apart from it, I feel like they have a timeline in their head. Like this has to happen before this, or whatever it is. So, you can try to make that happen… But really, I am so happy that we’ve been able to grow, like from moving in together four years ago, we’ve just grown so much. I can only imagine how much more we will continue to grow.”

The snow has started to fall in Orchard Park.#Bills #Bengals pic.twitter.com/Jk2jOH63Ai

Despite the Bills’ less-than-stellar performance over the Dolphins last week, oddsmakers considered Buffalo as favorites to defeat the Bengals. However, Cincinnati’s offensive line has taken some hits heading into the divisional round. Not only is starting right rackle La’el Collins on IR, but Jonah Hill (dislocated knee cap) and Alex Cappa (ankle) suffered injuries while playing against the Ravens last week. All three remain out for Sunday’s divisional matchup, along with cornerback Tre Flowers.

On Thursday, January 18, Caesar Sportsbooks‘ Max Meyer tweeted, “The biggest divide on any Divisional Round spread at @CaesarsSports is Bengals at Bills. This line opened Bills -3.5, now it’s up to -5.5.”

However, Buffalo’s defense took a hit just before game time, as the team revealed they will be playing without defensive tackle DaQuan Jones, who’s dealing a calf injury. Losing Jones, who’s yet to miss a game this season, is a huge loss, as he’s been their most consistent defensive lineman against the rush and the pass.