Before the Buffalo Bills take on the Los Angeles Rams for the NFL’s season opener, quarterback Josh Allen‘s longtime girlfriend, Brittany Williams, crossed enemy lines to appear as a guest on Kelly Stafford’s podcast, The Morning After, which premiered before kickoff on September 8.

Of course, Allen’s girlfriend is far from enemies with Stafford, wife of Rams quarterback, Matthew Stafford, and the two women share an understanding of what it’s like being in a relationship with a superstar NFL player. On the podcast, Williams mentions that her entire flight to California was filled with Bills fans and how she’s getting to SoFi Stadium five hours early on Thursday because there will be a family tailgate of about 200 people.

Stafford says, “Matt is practicing silent count because that’s how many Bills fans are coming to this game,” Stafford said. “I have chills. It’s amazing.”

The herd has arrived in So Cal. 👀#Billsmafia pic.twitter.com/H3TnWR0FXA

On a more personal level, Williams opens up about her relationship with Allen, how they’ve known each other since they were eight years old, the year he “ghosted” her after she took him to the Sadie Hawkins dance, and how the future Bills star won her back while they were in college.

Similarly, Stafford started dating her future husband while they were students at the University of Georgia before tying the knot in 2015. Together, they share four daughters, identical twins Sawyer and Chandler, Hunter, and Tyler. However, before they got engaged, “I had to give Matthew an ultimatum,” Stafford says. 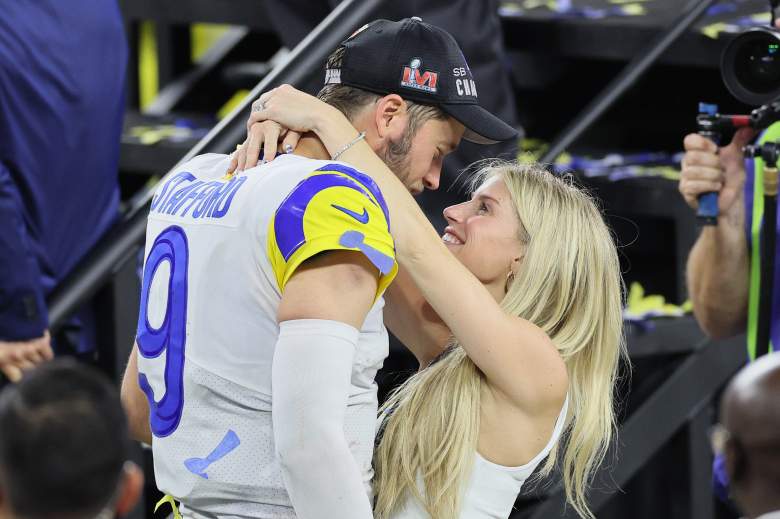 GettyMatthew Stafford #9 of the Los Angeles Rams celebrates with his wife Kelly Stafford during Super Bowl LVI at SoFi Stadium on February 13, 2022 in Inglewood, California.

“Quarterbacks, their mind is on their career at all times. Which you get,” Stafford tells Williams. “They’re getting paid a lot to do it. They’re also the leaders of their team. So to pluck him away and be like ‘Hey, this needs to happen or else I’m out.’ It was like 10 years coming, maybe 11… but looking back at it now, I’m so incredibly grateful it happened that way.” 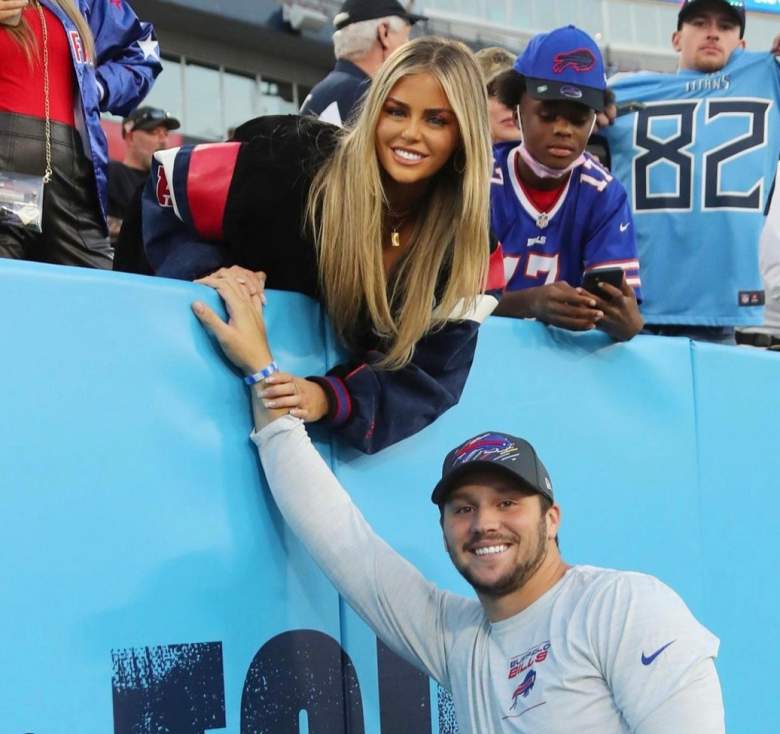 As for Williams, “What me and josh always say: ‘What’s understood doesn’t need to be explained.’ Like we understand what we have. Everyone around us are going to say this, say that. When you’re married, when’s the baby coming. When have your baby, when’s the next baby coming. So we just always say that. We have a great thing going.

“Like you said, quarterbacks are so focused and so different in the sense of the way they think. That comes first in their mind and I totally understand that. Apart from it, I feel like they have a timeline in their head. Like this has to happen before this, or whatever it is. So, you can try to make that happen… But really, I am so happy that we’ve been able to grow, like from moving in together four years ago, we’ve just grown so much. I can only imagine how much more we will continue to grow.”

Williams & Allen Moved Into a New Home With a Gate 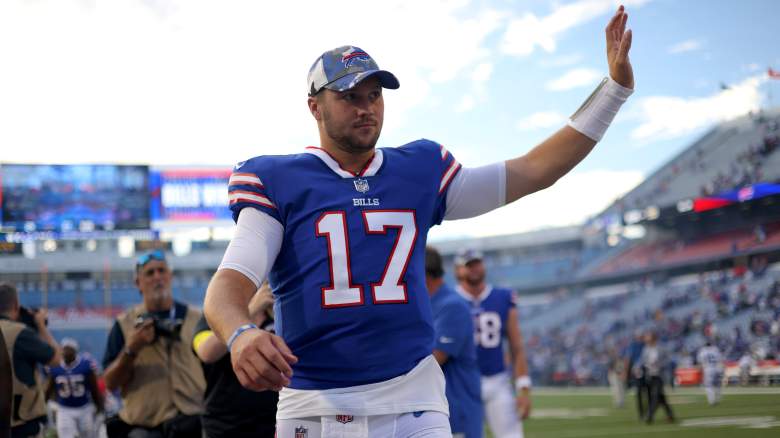 GettyJosh Allen #17 of the Buffalo Bills walks off the field after a preseason game against the Indianapolis Colts at Highmark Stadium on August 13, 2022.

The Fresno State alum tells Stafford that she and Allen just moved into their new house this past week, which they started building last year. The new home is “more private,” and much bigger, so “all of our friends and family can stay and enjoy,” and most importantly, “We have a gate.”

She explains how fans used to swarm their old place, which was in the middle of the neighborhood. While Williams understands the fervor surrounding Allen, having a place where they can truly be alone was crucial. “I feel like this past year, I had to step up and be that voice and draw the line. I’m just trying to be protective of what we have.”

Williams also has a healthy approach to dealing with women who openly swoon over Allen. “It doesn’t bother me at all,” she tells Stafford. “It’s just what comes with it. Me and Josh honesty just crack up at some of the stuff we see. If you’re going to be upset about that then you’re not going to last as the significant other.”

Allen Spent Quality Time With Williams During the Offseason 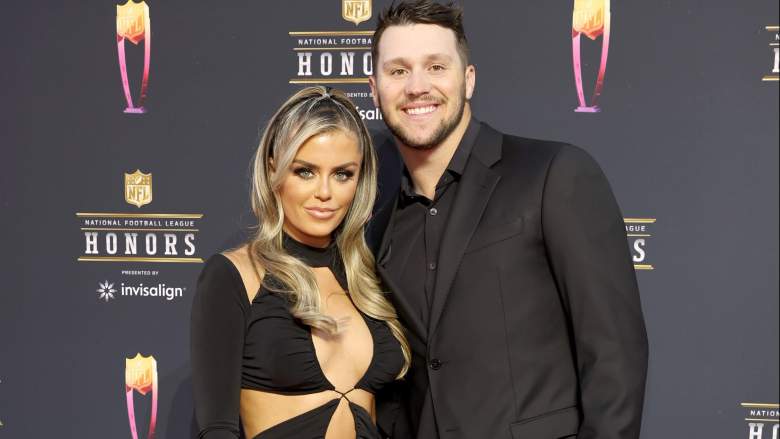 Following the Bills’ heartbreaking overtime loss to the Kansas City Chiefs, Allen took a much-needed break from football. The couple jetted off to Mexico, attended the Miami Grand Prix, and celebrated her 26th birthday in New York City. Allen posted a special birthday tribute to his love on Instagram. He captioned the post, “Blessed to celebrate another year of your life ❤️ I love you so much 😘.”

In May, Williams returned the love with a birthday tribute to Allen. She captioned the post, Happy birthday to my love @joshallenqb 🤍
Doing life by your side is my favorite… i love you ✨✨.”

In July, Williams and Allen went on a friends’ trip to Wyoming before joining Houston Texans quarterback Kyle Allen and his fianceé, Summer Juraszek on a lake vacation in South Tahoe, where the Bills star competed in The Match.

In a recent interview with NBC Sports host Chris Simms, the dual-threat quarterback said the extra rest did him good. Allen, who recorded 4,407 passing yards and 42 touchdowns last year, told Simms, “I think my play style is different than a lot of quarterbacks in the league. After the season, I’m beat up physically.

“This offseason is actually the least amount of working out I did. When I came back and I did our initial testing, I blew every test that I’ve ever done out of the water. It’s the best I’ve ever felt right now.”