Williams, 26, dressed up as Britney Spears from the pop star’s iconic “Oops, I Did it Again,” music video while Gentry fit the theme as an “Alien,” another song by the singer. Williams nailed the costume from the matted-down long hair to the red catsuit, while Gentry rocked a silver metallic bodysuit for her extraterrestrial look. 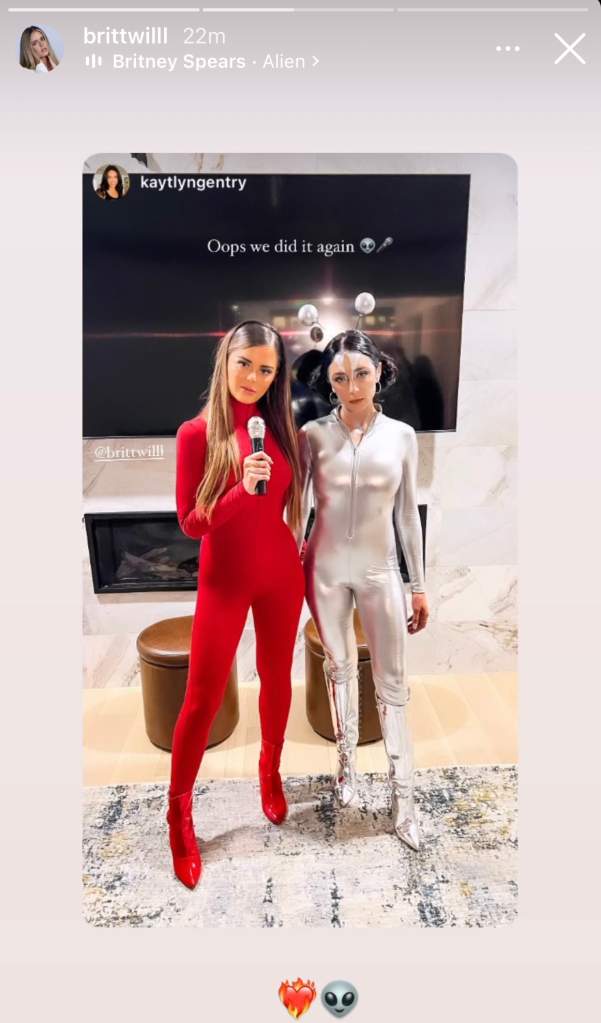 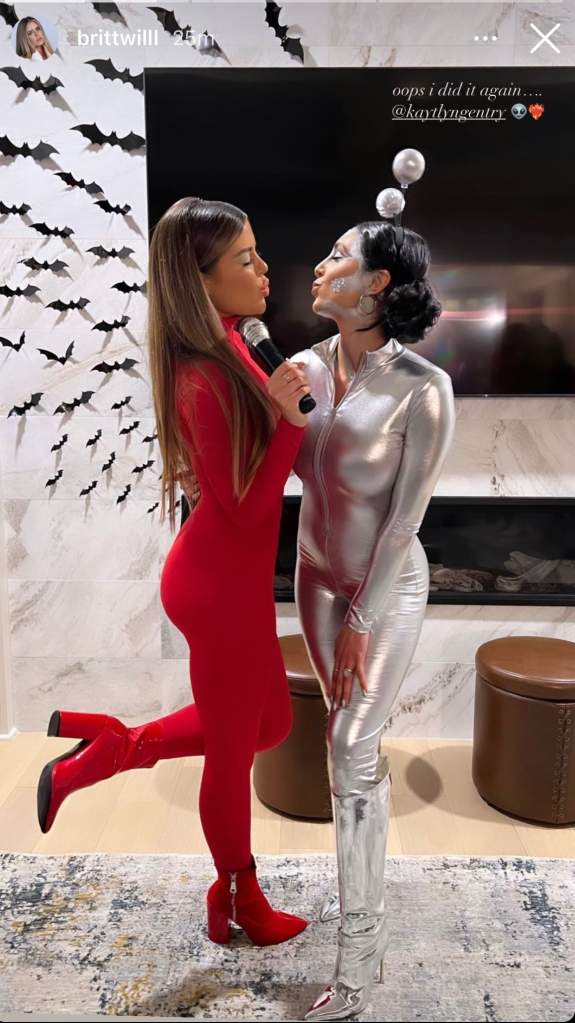 After a fun night of partying, both Williams and Gentry will be at Highmark Stadium on Sunday, October 30 to watch the Bills play in primetime. While Buffalo (5-1) is returning from their bye week on a high following their 24-20 win over the Kansas City Chiefs, the Packers (3-4) are in the midst of a three-game losing streak after an embarrassing defeat to the Washington Commanders in Week 7.

Not only do the Packers have a 0-6 career record when playing on the road in Orchard Park, per USA Today, but under head coach Sean McDermott, the Bills have never lost their first game back from a bye week.

There is one stat that bodes well in Rodgers’ favor, he’s won each of the Packers’ last 13 matchups in primetime. Unfortunately for Rodgers, however, the Bills have the No. 1 defense in the NFL.

Thanks to Halloween, Josh Allen’s mustache has made a triumphant return. (📸: Brittwilll – IG) pic.twitter.com/Yz0BvrUFiL

Earlier in the week, Williams and Allen hosted a Bills’ Halloween party where the couple went with a Roarin ’20s theme. The Wyoming alum rocked a mustache and a black tuxedo while Williams looked stunning in a blonde wig, satin gloves, and a baby blue fur shawl.

Gentry and his wife dressed up as Storm and Forge from X-Men while team captain Taiwan Jones dressed up as comedian Kat Williams. Bills safety Jordan Poyer and his wife, Rachel Bush, went as race car drivers while Micah Hyde and his wife Amanda were incredibly impressive as Frankenstein and his bride.

Allen Is Not Sleeping on Rodgers & The Packers

While Rodgers’ underdog status has him extra motivated to get a win on Sunday Night Football, and he’s put his entire offense on notice if they can’t get it together to play well against Buffalo, Allen has his own source of inspiration.

The Wyoming alum recalled on Wednesday the first time he faced Rodgers as a rookie back on September 30, 2018. During the matchup at Lambeau Field, the Bills lost 26-0.

“I didn’t know left from right at that point,” Allen said of the blowout defeat, during which he completed 16-of-33 passes for 151 yards and two interceptions. “Just in terms of our scheme, blocking, our protection – it was just a blur to me.”

At the NFL Combine in 2018, Josh Allen was asked which quarterback he tries to model his game after.

"It would be Aaron Rodgers… he makes some crazy throws… plays with a lot of grit. That's what I try and go out there and do."#BillsMafia pic.twitter.com/P4A6OzKgfK

A lot has changed since Allen first went up against the player he admired growing up as a kid in Firebaugh, California. Heading into Week 8, Allen leads the NFL averaging 330 passing yards per game, and ranks second with 19 touchdowns, per Bills reporter Maddy Glab.

While the bulk of NFL analysts belive this primetime matchup will be an absolute blowout, Allen is not sleeping on the four-time MVP. “He’s Aaron Rodgers,” Allen said. “One of the best, if not the best quarterback to play the game. I think we understand that. All we can focus on though is putting our best foot forward in practice, developing a game plan, and going out and trying to execute on Sunday night.”

“Every game is so different,” Allen continued. “We don’t really look at records. They’ve got a really good group of guys and again, one of the best quarterbacks that’s ever played the game.”