Getty Josh Allen #17 of the Buffalo Bills looks on during the second half against the Detroit Lions at Ford Field on November 24, 2022 in Detroit, Michigan.

The Buffalo Bills win over the Detroit Lions on Thanksgiving Day was not pretty, but a win nonetheless. With 23 seconds left in regulation and a tie score, Bills quarterback Josh Allen threw a 36-yard dart to wide receiver Stefon Diggs on his first throw of the drive which put the team in field goal range.

Allen set up kicker Tyler Bass, who previously missed an extra point, to put the game away with a 45-yard field goal. While it was initially difficult to tell if the kick was good or not, the ball eked through upright and the Bills won 28-25.

Immediately following the game-winning score, the CBS broadcast panned to Allen, whose look of relief went viral on Twitter. Allen brought Diggs in for a close hug, held him close, and viewers could almost see the stress leave his body.

USA Today‘s Bradley Gelber tweeted that before the camera reached the quarterback, Allen was “screaming on the sideline before embracing his teammates. Man did he want that one.”

While it was Bass’ field goal that put the Bills in the win column, Diggs’ catch to start the drive was one of the most impressive plays of the game. NFL Network‘s Ian Rapoport tweeted, “Diggs does things on the football field that defy logic. That catch, while being hit, in that moment, then having the presence of mind to call timeout. Just incredible.”

With this victory, the Bills’ second win at Ford Field in five days, Buffalo enters Week 13 with an 8-3 record.

Diggs Gave Credit to Allen for that Clutch Catch

While Diggs deserves to be applauded for his clutch catch late in the fourth quarter, the two-time Pro Bowler diverted all credit to Allen.

“I would say it’s not me at all,” he said, per NBC Sports reporter Albert Breer. “We have the best quarterback in the league. Anytime we hit a lull, it’s like, his eyes are locked in, he’s focused. I try to be his support system, get open, catch the ball. … That’s my guy.” Diggs finished against the Lions with eight receptions for 77 yards and one touchdown.

Allen, who finished the game completing 57.1% of his passes for a total of 253 yards against the Lions, of course, gave the credit to Diggs. “CBS asks Allen what was the difference on the last two drives of the game? ‘Throw it to 1-4,” he said, Gelber tweeted. 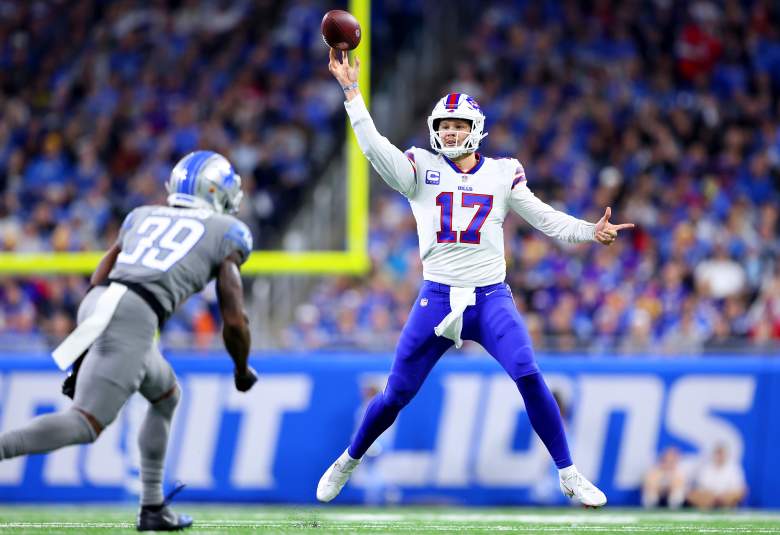 GettyJosh Allen #17 of the Buffalo Bills throws a pass against the Detroit Lions during the second half at Ford Field on November 24, 2022 in Detroit, Michigan.

While it’s amazing to see the Bills win two in a row, it’s hard to celebrate the win without acknowledging Allen’s health status. Syracuse.com’s Matt Parrino tweeted after the game, “Allen is obviously not right with the elbow yet. Made enough plays to win today. Things get considerably more difficult next week/month.”

This past week, Allen showed up to practice for the first time without a brace on his throwing arm, but the 26-year-old admitted that he was still not back 100% after suffering the injury against the Jets in Week 9.

“Still working through it,” Allen said. “I just trust in what our strength staff is saying. Bit of a walkthrough today so obviously no chance of contact or anything like that. Just trying to get comfortable without throwing it. Who knows game time if I’m wearing one or not. We’ll take it day by day.”

The Bills have a full week before facing their AFC East division rival, the New England Patriots, in Week 13, which will provide Allen, and all the banged-up players, to get some much-needed rest.

All eyes will also be on Von Miller’s status, as the eight-time Pro Bowler exited the Thanksgiving game late in the second quarter with a knee injury. “There is no doubt Von Miller will miss time,” Rapoport tweeted. “The question is how much. The Wild Card round of the playoffs is a more than a month and a half away. It’s 80 days until the Super Bowl. If the MRI confirms a sprain, his return could come in that window. Important tests coming.”