The Buffalo Bills (2-0) upcoming game against the Miami Dolphins (2-0) on Sunday, September 25 has shaped up to be one of the most exciting matchups in Week 3. Not only will one team leave no longer undefeated, but viewers will likely see an explosive offensive showdown between Bills star Josh Allen and Dolphins quarterback Tua Tagovailoa.

During an appearance on Kyle Brandt’s Basement on Wednesday, September 22, Allen discussed his AFC East rival’s near 500-yard performance against the Baltimore Ravens last week, along with his honest, albeit conflicted thoughts about the quarterback, who appears to be thriving under new head coach Mike McDaniel.

“They’ve got some great players on their side of the ball and ya know, Tua is playing fantastic right now which sucks as a Bills fan and a Bills player to see. You don’t want to see your division rivals winning football games. But I’m proud of him for all the adversity, all the naysayers — I can relate to a lot of that stuff. He’s just playing really good football right now. I hate to see it, but it’s very good for him.”

While Allen is understandably not thrilled to see Miami be one of the six NFL teams remaining unbeaten this season, on a personal level, he only had positive things to say about the 24-year-old Alabama alum.

“Every time I’ve interacted with him, he’s been the coolest, nicest person you can think of,” Allen told Brandt. “Again, it’s hard to not root for a guy like that. It just so happens he’s in our division. Ya know, especially when he’s playing against us, we can’t root for that.”

Allen Is Not Sleeping on the Dolphins 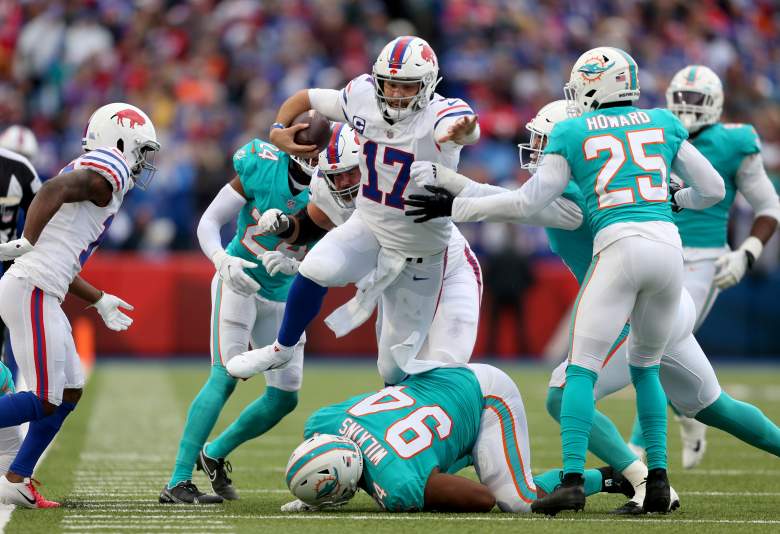 GettyJosh Allen #17 of the Buffalo Bills runs with the ball in the fourth quarter against the Miami Dolphins at Highmark Stadium on October 31, 2021 in Orchard Park, New York.

While the Bills have beaten the Dolphins during their past seven consecutive matchups, and enter Week 3 as 5.5-point favorites to win, Allen told Brandt that you have to stay especially alert when facing a division rival.

“Every year is different. Every game is different,” Allen said. “To see what they are and then when you play them — especially when it’s in a division rival, you’re playing them twice a year, they’re going to switch it up. They’re going to show you looks they normally wouldn’t show because they know our tendencies, and we like to think we know their tendencies.

“So, both sides, in-game adjustments and seeing how they’re going to play us, that’s really going to be the key early on. Just trying to figure out what situations they’re bringing pressure in, what types of pressure they’re bringing, what we can do to combat that, and then how can we make plays going forward.”

Both Teams Have ‘Explosive’ Wide Receivers

While Allen seems to be able to make any wide receiver look elite, with Stefon Diggs firing on all cylinders, it’s a duo that’s nearly impossible to beat. However, Diggs told Heavy Sports earlier the Bills’ defense will have their work cut out for them defending wide receivers Tyreek Hill and Jaylen Waddle.

“I did see their offense. They look explosive,” Diggs told Heavy Sports. “They got two good receivers, two exceptional guys that look amazing out there. And Tua is out there throwing the ball with confidence. They have a good team. It’s definitely gonna be another test for us. We look forward to it. Gotta prepare the right way.”

Tagovailoa shared a similar sentiment during a press conference on Wednesday. “We understand that they’re a really good team,” Tagovailoa said. “They’re tough defensively, they’re explosive offensively. So, I wouldn’t say that we have a measuring stick for how good these guys are… So for us, we’re just looking at playing the way we play and playing the way we’ve played for the past two weeks. We’ll go out there and we’ll give our best and we’ll get theirs.”

Hopefully, the Bills No. 2 wide receiver, Gabe Davis will be back on the field for Week 3. While speaking to reporters on Thursday, Davis said he’s “feeling good” and that he’s “100%” optimistic that he’ll be ready to go against the Dolphins on Sunday.