Getty The Buffalo Bills 2022 first-round pick, Kaiir Elam (L), opens up about the quarrels between him and veteran Stefon Diggs (R).

One of the buzziest moments to come out of the Buffalo Bills‘ first week of training has been the heated altercations between the team’s 2022 first-round pick, Kaiir Elam, and the team’s No. 1 wide receiver, Stefon Diggs.

On the fourth day of camp, WGR 550’s Sal Capaccio tweeted, “First rep of one-on-ones. Looked like Elam held Diggs. Stefon did not like it at all. They were holding each other close and definitely having an animated conversation. One of the other DBs made sure it didn’t go any further.”

Capaccio also noted that that wasn’t the first time that the veteran and the rookie have exchanged words. “This is the second day in a row Diggs and Elam barked at each other a bit,” he tweeted. “Yesterday, Stefon stared him down and had a few words on his way back to the huddle after a contested play.”

The 21-year-old cornerback broke his silence on the matter while speaking to The Buffalo News reporter Jay Skurski on Friday, July 29, making it clear that he’s got nothing “personal” against the receiver.

“Honestly, I’m just trying to maximize my potential and just go as hard as I can,” Elam said. “Ultimately, to do that, I’ve just got to compete my behind off. I think me and Stefon have the same type of mindset, we just want to dominate and win, honestly.

“And the only way I can do that is competing against the best. I’m just striving every day to just get better. Not for a personal reason, but just from the team aspect, just to help my team win.”

Here's a look at #Bills 1st round pick Kaiir Elam on the field for Day 1 of rookie minicamp. pic.twitter.com/yfYpdqPTQk

As for the trash talking, “I appreciate it,” the young corner said. “But if he’s pushing me, I’m going to push back.”

“That’s not just him,” the No. 23 overall pick continued. “That’s going to be the whole, entire receiving corps, the tight end corps. I’m going to stay level-headed and try to earn everything I get. Don’t get me wrong. I’m super, duper competitive. I try to win at everything I do, but I don’t have to go out there and make it all about me. It’s not like I’m trying to bring attention to myself. I just want to win. I don’t do that to be flashy. That’s just who I am. I want to go out there and dominate.” 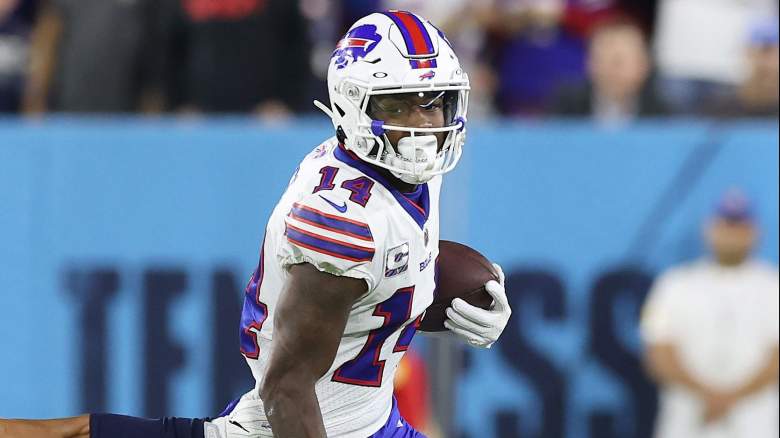 GettyStefon Diggs #14 of the Buffalo Bills against the Tennessee Titans at Nissan Stadium on October 18, 2021 in Nashville, Tennessee.

The two-time Pro Bowler made it clear he’s not simply hazing the new rookie, but trying to get him ready for a seamless transition into the NFL, especially during a year where the team’s mentality is Super Bowl or bust.

“I feel like we got a lot to build off of, just as far as, like, a team and as a unit. As far as individual, he’s a good player,” Diggs said of Elam, per The Buffalo News. “You know, he was drafted in the first round. Of course they’re going to expect a lot out of him immediately, but I feel like he’s up to the task and hope we can build off it.”

Josh Allen and Stefon Diggs are consistently in the lab together.#AllenDiggs2022 #BillsMafia pic.twitter.com/M4VsexlOBX

Elam is projected to be a starter in Week 1 while Pro Bowler Tre’Davious White recovers from an injury, which means the pressure is on for him to quickly learn the team’s game plan.

One person who approves of the tough love Diggs is giving Elam is Bills’ head coach Sean McDermott.

“He’s learning every day,” McDermott told Skurski of the Florida alum. “He’s adding notes to his notebook and had a couple good battles yesterday when the ball was thrown into a contested ball situation. I think Stef won a couple of them and Kaiir won a few, as well.

“The thing I appreciated about it is Stef is very competitive, but he then takes time to teach Kaiir off the field, as well, which I think is tremendous.”

As for defensive coordinator Leslie Frazier, he told The Buffalo News that he loves seeing Elam fight back. “There’s always just some trepidation when you are a rookie and potentially having to start, especially at the corner position where, early on, people are going to target you and you have to be able to stand up early or otherwise they continue it.”

Loading more stories
wpDiscuz
0
0
Would love your thoughts, please comment.x
()
x
| Reply
The Buffalo Bills 2022 first-round pick, Kaiir Elam, opens up about the quarrels between him and veteran Stefon Diggs.