Getty Kendal Vickers #93 of the Las Vegas Raiders runs a drill during training camp on July 28, 2021 in Henderson, Nevada.

The Buffalo Bills (9-3) are working to beef up the defense after losing superstar edge rusher Von Miller. The eight-time Pro Bowler discovered he did suffer an ACL tear while undergoing exploratory surgery and the team announced on Wednesday, December 7, that he’s done for the season.

Unfortunately, Miller is far from the only injured player on defense. On Thursday, December 8, Bills defensive tackle Eli Ankou was placed on the practice squad injured list, the team announced on Twitter, and to fill the void, the team was quick to snatch up former Las Vegas Raiders defensive tackle Kendal Vickers one day after his release. He has a PFF pass rush rating of 63.3.

Vickers initially signed with the Pittsburgh Steelers as an undrafted free agent in 2018 but was released just before the final roster cuts. The 6-foot-3, 295-pounder had a brief stint with the Tennessee Titans practice squad before spending the 2019 season with Edmonton Eskimos in the Canadian Football League, where he recorded 12 tackles and two sacks.

The Tennessee alum signed with the Raiders in January 2020 and earned a spot on the 53-man roster. The 27-year-old was one of the few players to carry over from former head coach Jon Gruden’s squad and continued to serve as a primary backup over his three years in Las Vegas. During Vicker’s tenure, he appeared in 25 games and made two starts, recording a total of 20 tackles, three tackles for a loss, and three quarterback hits.

Vickers appeared in eight games with the Raiders during the 2022 NFL season before suffering a back injury, which kept him out for three games. In his absence, the Raiders elevated Kyle Peko from their practice squad, a move the team decided to make permanent by releasing Vickers, per Raiders Wire. 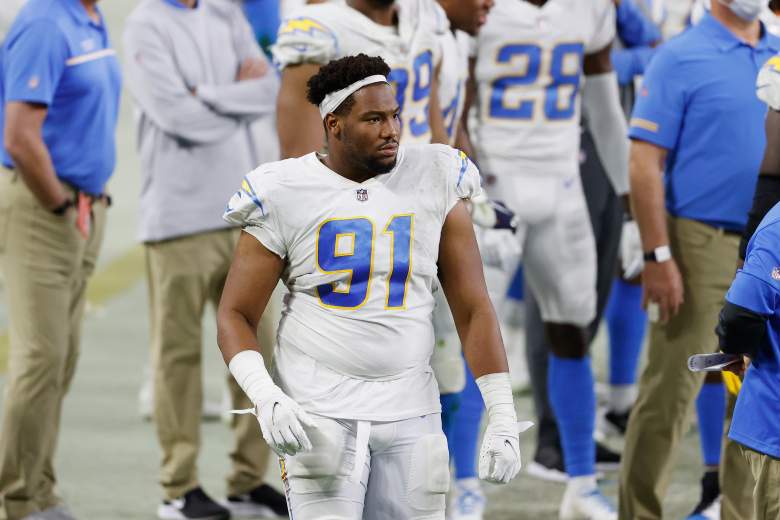 In addition to losing Miller, Bills defensive tackle Jordan Phillips could miss some time after suffering a shoulder injury during the team’s 24-10 win over the New England Patriots on Thursday Night Football. Phillips got hurt while attempting to dive and sack Patriots quarterback Mac Jones. While the 30-year-old said “he’s fine” after the game, Phillips was unable to participate in practice on Wednesday.

While it’s unclear if or how much time Phillips will miss, as the Bills have an extended rest period ahead of their Week 14 matchup against the New York Jets on Sunday, December 11, USA Today’s Nick Wojton wrote, “It’s not set in stone, but the transaction involving Brewer “could be bad news” for Phillips.

The Bills Defense Performed Well Against the Patriots Without Miller 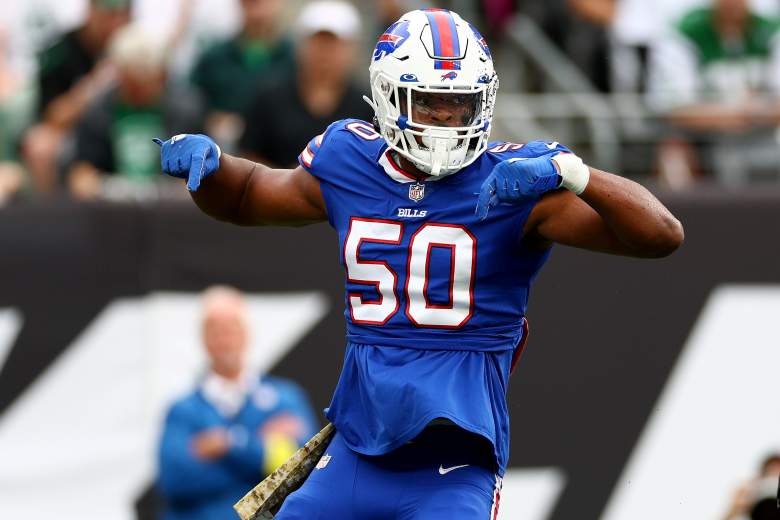 GettyGreg Rousseau #50 of the Buffalo Bills celebrates a stop against the New York Jets during the first quarter at MetLife Stadium on November 06, 2022 in East Rutherford, New Jersey.

While the idea of finishing what’s lined up to be a Super Bowl or bust type of season without their $120 million edge rusher seems like a daunting task, the Bills actually performed quite well without Miller against the Patriots last week. The Bills looked to starting defensive ends Greg Rousseau and Shaq Lawson to pick up the slack, and they did so admirably.

The Athletic‘s Joe Buscaglia wrote, “Both players provided pressures and near sacks, which forced Mac Jones into a hectic situation. And by doing so, they caused Jones to trust his offensive line less, as he was more prone to drift from the pocket at the first sign of danger. It’s only one game and the duo need to keep it going, but it was hard not to be impressed by the first game without the Bills’ star pass rusher.”

Sitting atop the AFC with a 9-3 record, the Bills enter Week 14 as 9.5-point favorites to beat the Jets.