One of the most highly anticipated position battles for the Buffalo Bills heading into the 2022 NFL season was which player will be named as the team’s starting punter: Matt Haack or Matt Araiza.

Haack, who initially signed with the Miami Dolphins as an undrafted free agent out of Arizona State in 2017, signed with the Bills in 2021, where he proceeded to become the starting punter. However, his role was immediately put into question after the Bills selected Araiza, a.k.a. “The Punt God,” with their No. 180 overall pick during the 2022 NFL Draft.

During the Bills’ first preseason game against the Indianapolis Colts on Saturday, August 13, Araiza impressed analysts across the league so much that it seems the competition for the starting role is over and done.

The rookie from San Diego State connected on an 82-yard punt during the first half of the game, video of which quickly went viral on Twitter.

“First round of roster cuts around the NFL must be made by Monday,” Spectrum News 1 Buffalo reporter Jon Scott tweeted after seeing Araiz’a stunning kick. “#Bills should have Matt Haack part of that to allow him chance to latch on to another team. Matt Araiza will have his ups and downs, like Tyler Bass his rookie year, but he’s definitely the guy.”

“Matt, you’re up. Kick the everliving sh** out of the ball.”

While there was worry over whether or not Araiza could hold his weight as a holder, he seems to be doing just fine. In the third quarter, he held the ball for kicker Tyler Bass, who drilled a 48-year field goal.

The Bills’ Special Teams Coordinator Said ‘Nobody Is Ever Safe,’ But Praised Haack for Taking Araiza Under His Wing 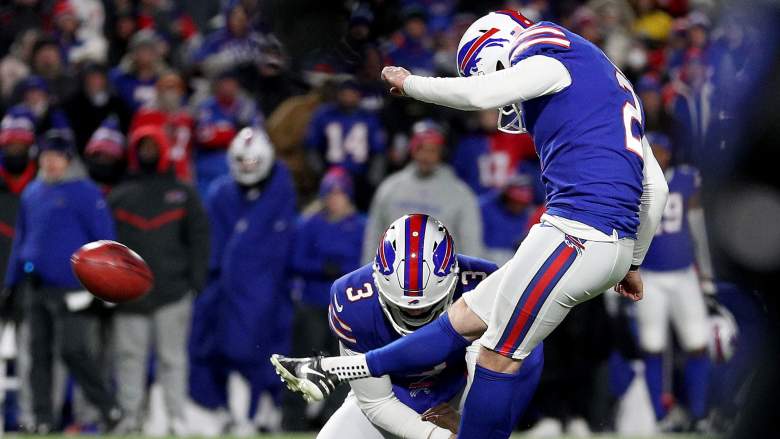 GettyTyler Bass #2 of the Buffalo Bills kicks a field goal with holder Matt Haack against the New England Patriots on December 06, 2021 in Orchard Park, New York.

During training camp at St. John Fisher College, the Bills’ special team coordinator Matthew Smiley made it clear the starting role was up for grabs.

“I hope that whether it’s training camp or even Week 8 of the season, I’m pushing to have that type of competition whether it’s a 90-man roster or a 53-man roster because nobody’s ever safe,” Smiley told The Buffalo News on July 29. “Even though it depends on how things sort out day to day and how the roster looks day to day, my emphasis is always to push that level of competition, so it doesn’t feel different for the guys.”

While Haack, 28, may feel pressure competing against a 22-year-old rookie with such a famous reputation, he took the new addition in stride. “I can’t worry about what anyone else is doing,” Haack said. “I’ve got to focus on my job and doing better than what I did the day before; what I did last year or the year before. So, it’s all about getting better each day and putting my best foot forward.”

He did not punt. pic.twitter.com/OSX5YI7mfi

Smiley loved how Haack took Araiza under his wing during spring training and throughout practice at camp. “I’ve been so impressed with the way he’s carried himself as a man through the course of this competition, the spring and camp,” Smiley said of Haack.

“There have been times when Matt Araiza has asked Matt Haack questions, and Matt Haack has helped him out and talked to him about different details of trying to be a player in the NFL. I can’t speak enough to the type of human being it takes to know you are fighting for your job and you’re still willing to do the right thing when it comes to interacting with somebody.”

As for Araiza, he’s grateful for Haack’s guidance. “I think it just shows his character,” he said of Haack. “A lot of people would rather just mind their own business, try and win the job. But the fact that he’s an open book and I can go ask him questions, I think is a huge help to me.”

While most athletes would love being called “The God” of their position, Araiza thinks it’s too much. “Araiza says if he’s being honest he doesn’t love the nickname ‘The Punt God,'” Syracuse.com’s Matt Parrino tweeted. “He says it’s a little much but he gets it.”

In an interview with Sports Illustrated‘s Richard Johnson, Araiza credited his soccer training as a kid for helping develop his powerful kicks:

Growing up playing soccer I was always a couple years ahead of everyone. When I was U-10 I could kick the ball like I was U-12. Then in high school, when I went out for the freshman team I wasn’t necessarily planning on doing it to just kick and punt; I was doing it to play football in general. I think my first-ever kickoff ever was a touchback, and the coaches kinda lost it at that. Just hearing the way they were talking about it made me feel like, O.K., I don’t think that many people can do this.

Matt Araiza's already feeling the love from #BillsMafia and he can't wait for a new experience of playing in front of such a passionate fan base.

"It seems to mean a lot more to the people, the fans, so I'm really excited for that aspect."#Bills #NFLDraft pic.twitter.com/7Mv1kiwtcN

Despite the nickname, Araiza is humbled to be heading into the NFL, and ready to get used to kicking in much colder temperatures than he played in at San Diego State.

“I think leg strength and athleticism are two things that help in those conditions and those are two things I pride myself in and will work on,” he said. “I’m not a complete player yet, but I’m excited to get in the building and work with the coaches and the players.”

Loading more stories
wpDiscuz
0
0
Would love your thoughts, please comment.x
()
x
| Reply
Buffalo Bills rookie Matt Araiza seems to have ended the competition for the team's starting punter after drilling an 82-yard punt against the Colts.