While the Buffalo Bills have largely kept details of Odell Beckham Jr.’s free agency visit under wraps, one of their biggest competitions to land the wide receiver, the Dallas Cowboys, have not been shy about rolling out the red carpet for the three-time Pro Bowler.

Amid Beckham’s trip to Dallas, a new report concerning the 30-year-old’s health status turned heads on Tuesday, December 6. ESPN‘s Ed Werder tweeted, “Source: The #Cowboys have concerns after Odell Beckham Jr.’s physical that his recovery from torn left ACL in Super Bowl has not progressed enough to ensure he would play before mid-January and possibility exists signing him would have no benefit until 2023 season.”

The timing of Werder’s report was suspicious for several NFL analysts tracking the Beckham sweepstakes. WKBW‘s Matthew Bové tweeted, “This is just my opinion and I could absolutely be wrong, but the more reports I see about injury concerns for OBJ, the more I think someone in Dallas is leaking info because they don’t think they’re going to get him.”

WGR 550’s Jeremy White tweeted, “If the Cowboys start telling EVERYONE (Have seen two national guys in 2 minutes telling their story) that they ‘have concerns’ about OBJ, it means they either A) have concerns, or B) Know they aren’t going to get him and have to explain how that could happen.”

WROC-TV host Thad Brown surmised, “There is a ton of smoke pouring out of Dallas that Odell isn’t healthy. He very well may not be. But this also seems like exactly the CYA move Jerry Jones would pull if the Cowboys lost Odell to another team.” USA Today‘s Giants reporter Art Stapleton added, “Cowboys putting the full court press on OBJ for three weeks, only to end his visit with attempt to crush his market with Jerry Jones throwing cold water and leaks about his physical today is something else.” 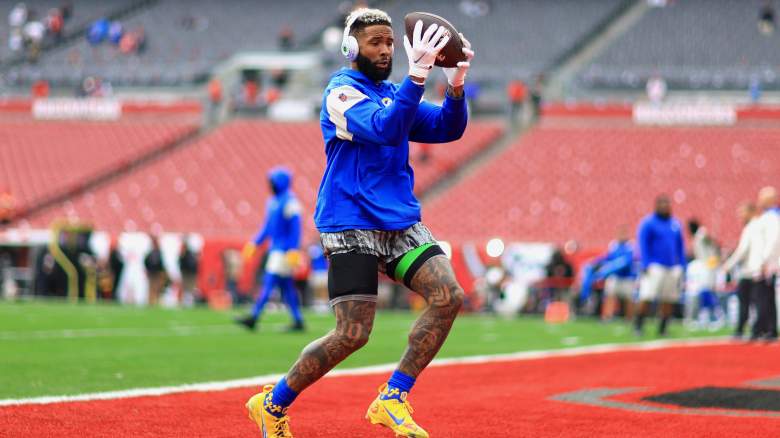 Not long after Werder’s report came out, CBS Sports analyst Josina Anderson shared a message that appeared to have come from the receiver’s camp. Anderson tweeted, “I’m told Odell Beckham Jr is still on his visit with the #Cowboys, per league source. Separately, sources close to Beckham Jr. tell me he feels able to contribute to the playoffs this season, especially after getting in with a team & acclimating consistently over several weeks.”

No one has seen Beckham play since he tore his anterior cruciate ligament in his left knee during Super Bowl LVI back in February. While he’s been medically cleared to play, the veteran did not work out with any of the three teams he’s visited over the past week, which has been a huge red flag for anyone trying to figure out when or if he’ll be able to suit up this season.

However, Power 96.5 FM host Muki Hawkins says that if Beckham can’t play right away, that won’t be a huge issue for Buffalo. “If bills sign obj they don’t need him to play right way,” Hawkins tweeted. “So don’t feed into what comes out of Dallas. But if #bills sign Beckham this re-establish the team as SB Favorites.”

NBC Sports analyst Albert Breer wasn’t sure what to make of the latest reports. “Beckham’s 2020 surgery was a mess to the point where the Rams had concerns about signing him last year—feeling like his knee was a ticking timebomb. That bomb went off in the Super Bowl,” Breer tweeted. “Hope is the recovery from this one will be cleaner. But there’s a lot to sort through.”

USA Today‘s Bradley Gelber is fine with taking a risk with Beckham if the money is done right. He tweeted, “All for the #Bills adding talent but just not sure how you can roll the dice on a high $ contract for OBJ unless it’s heavily based on incentives.”

The Bills conducted their own physical during Beckham’s visit which means Buffalo has their own information to make a decision without having to consider the Cowboys’ report. WGR 550‘s Sal Capaccio tweeted, “I’ve seen some of this re: OBJ. Trust me, whatever the Cowboys say about his health will have zero to do with the Bills, who will have their own medical info on him. The Bills won’t make a decision based on what Dallas says about his knee.”

Bills Offensive Coordinator Spoke out About Beckham’s Visit to Buffalo

During a press conference on Monday, Bills offensive coordinator Ken Dorsey became the first coach to make a public comment about Beckham’s visit.

“The biggest thing is, obviously, he’s a heck of a player,” Dorsey said. “But, we feel like we’ve got a lot of great players on our team, and anytime you can create opportunities, create problems for defenses, you’re always looking at ways to do that. Different ways to attack defense, whether it’s personnel or scheme. So that would be another part of that, but at the same time, we’ve really been so happy with the guys that are here, with what they’re doing. It would just be another piece to add to an already really strong group.”

According to NFL Network‘s Ian Rapoport, Beckham will make a final decision on whether he’ll join the Cowboys, Giants or Bills by “mid-week.”