One of the most sought-after free agents heading into the 2022 NFL season, wide receiver Odell Beckham Jr., has made his interested in signing with the Buffalo Bills very clear. It appears that Beckham’s former teammate, superstar linebacker Von Miller, is possibly luring the three-time Pro Bowler to Buffalo by showing off hyped training camp content on Instagram.

Miller shared a video of himself running out to practice at St. John Fisher University on Sunday, August 7, and captioned the post, “U KNO IM LIT 😵‍💫😤😎🌪,” and the unbridled excitement expressed in the pass rusher’s post caught Beckham’s attention.

“U beeeen litttt!!!! @vonmiller what’s the locker next to u loook like 👀!!!??” Beckham wrote in the comments section, a bold message that turned heads on both Instagram and Twitter.

If the #Bills want Odell Beckham Jr. at some point this season, it’s not going to take much convincing…

One fan commented on Miller’s Instagram post, “@obj go to the bills it would be a dangerous squad 🔥go get another ring let’s gooooooo 💪🏽💯,” while another person wrote, “@obj NO NO NO don’t do it bro. COME BACK HOME #ramshouse💙💛🏈🐑.”

On Twitter, a Bills fan wrote, “I’m a HUGE supporter of Odell Beckham signing in Buffalo. Make the money work, give him the locker he wants, let him heal up and don’t activate him until Christmas if need be. Diggs, Davis, Knox, OBJ, McKenzie, Cook headed into the playoffs🤯.”

The eight-time Pro Bowler responded to Beckham’s comment with a separate post on his Instagram Stories on Monday, August 8. Miller posted a photo of Beckham in a Bills uniform wrote, “@ojb Let’s chase this ring… AGAIN.”

Von Miller is trying to get Odell Beckham Jr. to Buffalo… pic.twitter.com/vsoZTSx3fp

Miller isn’t the only person who believes Beckham could join him in Buffalo. Back in May, Fox Sports NFL analyst Eric D. Williams named the Bills as a possible landing spot for the 29-year-old receiver.

Williams wrote, “Other teams with Super Bowl aspirations such as the Buffalo Bills, Green Bay Packers, Tampa Bay Buccaneers, Kansas City Chiefs, and the New England Patriots witnessed the impact Beckham had for the Rams down the backstretch of last season and in the playoffs. Why not take a chance on a veteran receiver who can make impact plays and push your team over the top?”

OBJ SCORES THE FIRST TD OF THE SUPER BOWL‼️

OBJ to the Bills? 👀👀 pic.twitter.com/UcgqkbUvUa

Following the back and forth between Miller and OBJ on Monday, Cover 1 host Greg Thompsett tweeted, “For the #BillsMafia OBJ debates – the team is inarguably better with him – no they don’t NEED him – he won’t be ready until roughly December for 6-ish games + playoffs- he won’t sign with any team for a while to see his rehab timeline AND what team poised to win needs him.” 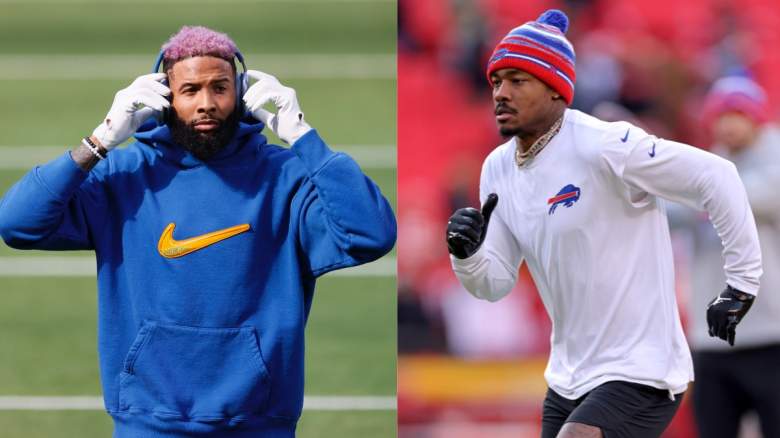 Rams head coach Sean McVay told NFL Network‘s Rich Eisen on May 16, “Of course, I really want Odell back on our team… Without a doubt… That’s the goal and continuing to work toward a solution of him re-signing with the Rams.”

Because the receiver sustained an ACL tear during the Rams’ Super Bowl victory and underwent surgery on February 22, he won’t be ready to go at the start of the season. However, that won’t stop the Rams from facing competition to sign Beckham.

Beckham first sparked speculation of his interest in Buffalo with his comment on Bills wide receiver Stefon Diggs‘ Instagram post. On May, 22, Buffalo’s star receiver shared a series of photos of himself working out in the gym, which caught Beckham’s attention.

The two-time Pro Bowler captioned the album, “I couldn’t sit around and wait, I had to have it happen.” The nine-year NFL veteran commented, “🐐 sheeeesh! Rock out slime, can’t wait to seee it,” which caused quite a stir on Instagram.

“@obj come see it in Buffalo wearing the same colors 👀,” one fan commented, while another person wrote, “@obj stop teasing, come to Buffalo.” One man added, “@obj ion even like the bills but u and diggs together dangerous.”