Getty D'Vonte Price of the Indianapolis Colts is tackled by Prince Emili of the Buffalo Bills during a 2022 preseason game.

After bouncing on and off the practice squad, the Buffalo Bills elevated rookie defensive tackle Prince Emili to the active roster for their Week 4 matchup against the Baltimore Ravens. During the Bills’ 23-20 win, Emili appeared in 20 snaps, was involved in three tackles and was a key part of one of the biggest defensive plays of the game.

So when the Bills announced they were cutting Emili from the practice squad on October 4 in order to sign two familiar faces, defensive tackle Justin Zimmer and cornerback Jordan Miller, fans and analysts were surprised.

“Is that Prince Emili, number 94?” YES IT IS pic.twitter.com/O1YaS5yssR

One fan tweeted, “Is Emili hurt? He had a fine game on Sunday,” while another person wrote, “Prince lit up the game the other day, wtf!?!?”

Prince Emili & Greg Rousseau re-establishing the line of scrimmage. The push & penetration wrecks this whole run. Emili had himself a day#Bills #BillsMafia #GoBills

The University of Pennsylvania alum’s breakout game against the Ravens earned the tackle high praise from defensive coordinator Leslie Frazier. “He’s the type of athlete that really works extremely hard,” Frazier said, per the Bills’ official website. “His work ethic, along with his physical talent, allowed him to go out and really help us yesterday to win that ballgame.”

The Bills Initially Released Emili During the Final Round of Cuts

Emili first signed with the Bills as an undrafted free agent following the 2022 draft. The 6-foot-1, 297-pounder grew up a Bills fan and was thrilled to get a chance to play in Buffalo.

“When I found out I was coming to the Bills, just the reaction from my family and my community was kind of ridiculous,” Emili said in early August. “I got lots of people that went to school in Buffalo, so it’s really deep and kind of feels surreal still.”

While he was one of six defensive tackles released during the final round of cuts in August, Emili must’ve been thrilled to return. “I couldn’t really ask to be part of a better organization for my career,” Emili said before he was cut. “I’ve heard a lot, but the culture here is just different. Everyone’s down to come to work every single day, give 100%, and are down to give me tips and help me learn. I just feel like this is a great place for me to get better every single day.” 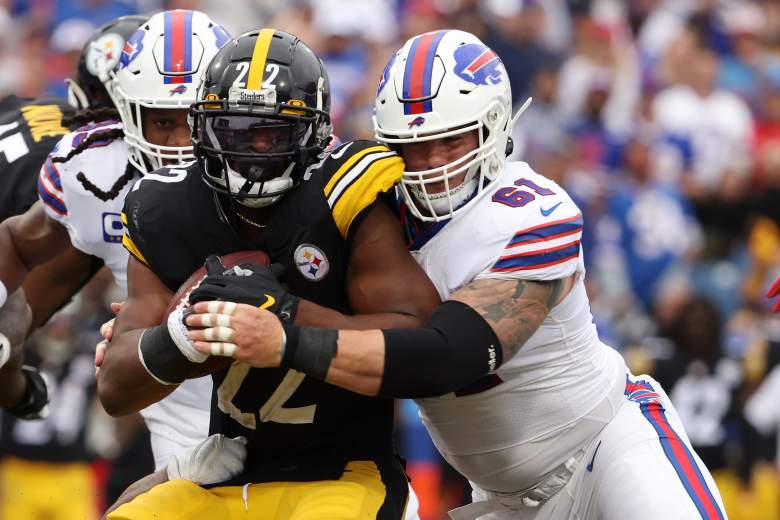 GettyNajee Harris of the Pittsburgh Steelers is hit by Justin Zimmer of the Buffalo Bills in 2021.

The Bills brought Zimmer in for a workout during the week of September 26. The Ferris State alum initially signed with Buffalo as an undrafed free agent in 2016 but was cut before the season started. After brief stints with the New Orleans Saints, Atlanta Falcons, and the Cleveland Browns, Zimmer returned to Buffalo’s practice squad in 2020.

The tackle soon earned a permanent role on the active roster, but suffered a season-ending knee injury in November 2021. In six games last season, he recorded eight tackles, two for a loss and one sack. The Bills, however, did not tender Zimmer.

As for Miller, 25, he worked with the Bills during training camp this summer but failed to make it through the final round of cuts. The fifth-round pick in the 2019 draft spent the first two seasons of his career with Falcons before having brief stints with the Seattle Seahawks and the New Orleans Saints.