Over a year has passed since Tampa Bay Buccaneers‘ star Tom Brady appeared on HBO’s The Shop, during which he discussed his journey as a free agent in the NFL. The seven-time Super Bowl champ famously said, “One of the teams, all of a sudden they weren’t interested at the very end. I was thinking, ‘You’re sticking with that mother******?'”

“Are you serious? When I look back at it there’s no f****** way I would’ve gone to that team,” Brady added. “But they said they didn’t want me! And I know what that means and I know what that feels like and I’ll f*** you up because of that!”

Rumors and fan theories filled the Internet, as everyone was trying to figure out which quarterback Brady was referring to, but on Tuesday, September 13, Buffalo Bills quarterback Ryan Fitzpatrick put the guessing game to rest.

During an appearance on The Dan Le Batard Show with Stugotz, the forever Bills fan favorite, who played four seasons in Buffalo between 2009 and 2012, shut down the rumor that Brady was talking about Derek Carr and the Las Vegas Raiders, and admits it was him and the Miami Dolphins.

“I think I still am that guy,” Fitzpatrick said. “If you go back to before the 2019 season, where the Dolphins were trying to assemble a roster that’ll help them get a better draft pick the next year. So, it’s not like it would be an attractive destination for Tom anyway… But I still believe to this day that I am that mutha…”

As for whether the new face of Amazon Prime’s Thursday Night Football broadcast was insulted or hurt by the comment, Fitzmagic gives the perfect response. “Yeah, I tried to get my wife to make a few t-shirts so I could wear them around, we’re just trying to figure out, with all the kids around, which letters to blank out.” 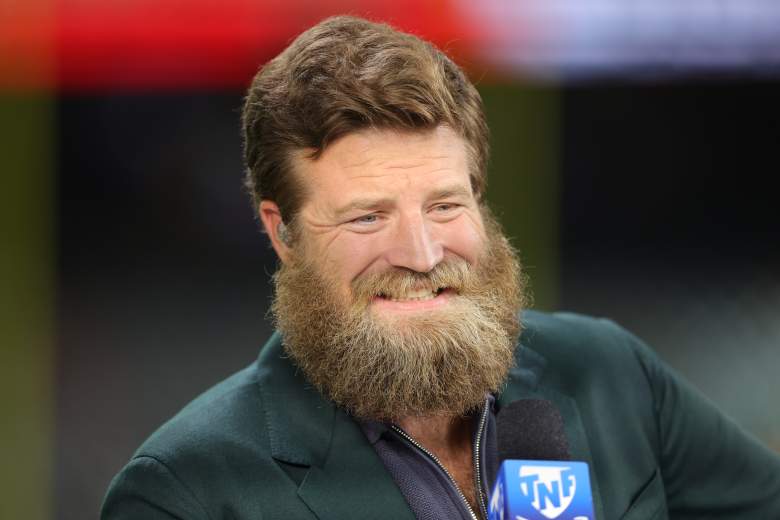 GettyRyan Fitzpatrick is seen prior to a game between the Houston Texans and the San Francisco 49ers at NRG Stadium on August 25, 2022 in Houston, Texas.

On Monday, September 12, the 39-year-old spoke to TMZ Sports about his former team being favorites to win the Super Bowl LVII, and was asked if he’d jump through a table if they got the job done.

Fitzpatrick said without hesitation, “There’s no doubt. I will be there in Buffalo to do that if that happens, yes.” While Fitzpatrick is a huge fan of Bills superstar Josh Allen, and recently called him “the perfect quarterback” for Buffalo, gushing over his “amazing skillset,” he believes there’s another elite quarterback that could win it all this year.

Fitzpatrick told TMZ Sports that his sleeper pick to reach the Super Bowl is the Baltimore Ravens. “I think Lamar [Jackson] is going to do it this year. Stay healthy and get a big old contract out of it.”

Fitzpatrick Announced His Retirement Via Text in June

After playing for nine teams over 17 NFL seasons, Ryan Fitzpatrick has told his former teammates in an incredible text he sent to them that he is retiring.

Here is a copy of that text, via @Fred22Jackson. pic.twitter.com/BjpAPaYagb

Originally drafted in the seventh round by the St. Louis Rams in 2005, Fitzpatrick played for several teams during his 17-year career, including the Bucs, Tennessee Titans, Cincinnati Bengals, Houston Texans, New York Jets, Miami Dolphins and the Washington Commanders.

After his retirement was inadvertently announced on Twitter by former Bills legend Fred Jackson, the father of seven appeared on Rich Gaenzler’s “Bull in the Basement” podcast to discuss what led him to retire and his plans moving forward.

As for when he started thinking about ending his NFL career, “I contemplated retirement after the 2016 season which was [the] Jets. Miserable. Hated every second of it. Hated football. Wasn’t a great year for me. I just didn’t play very well. After that, kind of re-found the passion, re-found the fire.

“But unfortunately last year, I had the hip injury. So it kinda started after my second scan, the MRI, just some of the results that came back, it wasn’t looking necessarily exciting in there. And then part of it, too, [is] my oldest is in high school now. A lot of different factors that have gone into it.”

As for his decision to become an NFL host, Fitz told The New York Post that becoming a TV analyst for Thursday Night Football allows him to remain involved with the game but also spend more time with his family. “For me to be able to sit down with my kids and watch some of these games on Sunday, it is something I haven’t had a whole lot of time to do these last 17 years,” he said.