Getty Wide receiver Stefon Diggs #14 of the Buffalo Bills warms up against the New England Patriots at Gillette Stadium on December 01, 2022 in Foxborough, Massachusetts.

The Buffalo Bills finally defeated one of the AFC East rivals, the New England Patriots, on Thursday Night Football and it wasn’t even close. The Bills shut down the Patriots in a 24-10 victory, cementing their position to finish this season with a winning record, and wide receiver Stefon Diggs was hyped.

Diggs finished the night with seven receptions on nine targets for 92 yards and a touchdown, and after the game, he gave credit to quarterback Josh Allen and his teammates. “It’s about performing at a high level in high-pressure situations, leading with Josh making good decisions, guys blocking extremely well, running backs protecting the ball,” Diggs said.

However, it wasn’t Diggs’ comments about his team that went viral following the Bills’ third-straight win, it was a postgame video that appeared to show the 29-year-old baiting another of their AFC East rivals, the Miami Dolphins. A popular Dolphins fan account tweeted out the clip with the caption, “Stefon Diggs: ‘I want the f..king Dolphins'” and added the challenge, “BRING IT!!!!! LETS GOOOO!!!! #MiamiDolphins #FinsUp.”

The video quickly went viral among Fins fans, but after Diggs saw the clip on Twitter, he called out the fan account for falsifying what he was actually saying.

Diggs tweeted, “I know this is probably what you wanted me to say. But let’s not lie okay thanks.”

Numerous people on Twitter took offense that Diggs would call Ian Berger, Chief Brand Office of Dolphins Talk, a liar. A Miami fan tweeted, “You could say what you want to claim you said. But no one has read your lips and believe you said anything else. Nobody has even dared to claim you said anything else. No need to call Ian a liar and cowardly leave it at that,” while another person wrote, “Calling a good man a liar but not revealing what you said is pretty shady stuff right there, Stef. We see what we see; it’s a pretty obvious lip-read and your incomplete response only reinforces that.”

However, Berger tweeted on December 2, I could have definitely been mistaken. 🤷🏻‍♂️👍” 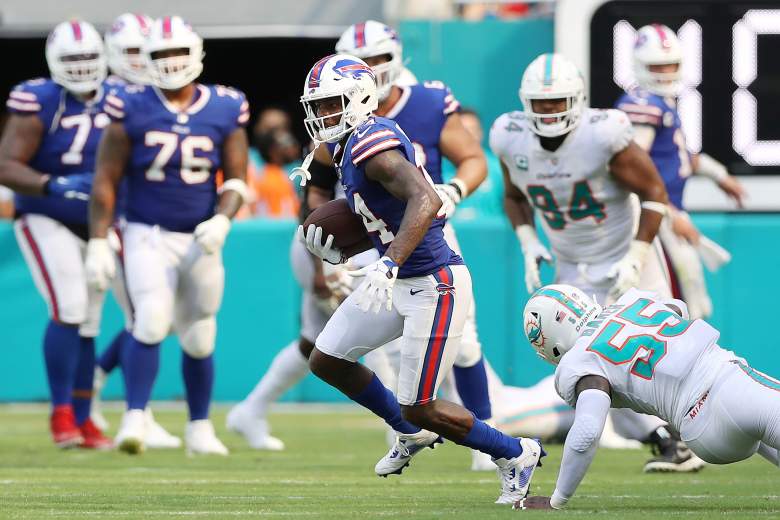 GettyStefon Diggs #14 of the Buffalo Bills carries the ball during the fourth quarter against the Miami Dolphins at Hard Rock Stadium on September 25, 2022 in Miami Gardens, Florida.

After seeing Diggs’ response to the video, there was just one question on fans’ mind: What did the two-time Pro Bowler actually say? A Giants fan guessed, “I run the f****** offense?” while a Bills fan joked, “Pretty sure he said ‘Watch the f****** office’ which I think I have to now. Thanks @stefondiggs 🤗.”

A Dolphins fan tweeted, “Funny sounds similar to what you all said the first time we played you this year. I know I know but the sun was too hot 😢.”

Buffalo lost to the Dolphins 21-19 in Week 3, during which the 110-degree weather and extreme humidity forced several Bills players to exit the game due to heat illness, receiving fluids in the locker room before being able to return to the field. In a subsequent interview on Dan Le Batard Show with Stugotz, Le Batard noted how the Bills “played in inhumane conditions” on Sunday and Diggs doesn’t disagree with him.

The weekly picture of the sun’s performance to remind how opposing players are architecturally encouraged to have Heat illness like the Bills RT pic.twitter.com/nhpbb8RUII

“Yeah, I think it’s set up that way,” Diggs replies. “Because if you ever notice on that Miami field, the majority of the Miami side is under the shade and our side? It’s in the sun that ya know, turns those grapes into raisins. It was real fun out there. Full body cramps is when your hamstrings, quads, arms, stomach — all the good stuff cramps up. It’s just part of the game.”

While Diggs denied he was calling out the Dolphins in the viral clip on Thursday night, his perceived comment still field the rivalry. One man tweeted, “We want you too 14,” while another person gloated, “When you know the Dolphins have arrived & living rent free in their opponents head. #FinsUp.”

“Make sure the entire team sees this,” one fan tweeted,” while ane person wrote, “Bro talking like they haven’t already played.”

The Bills Don’t Face the Dolphins for Another 3 Weeks

Following the Bills’ primetime win on Thursday Night Football, the team gets some much-needed extra rest before their Week 14 matchup against their other AFC East rival, the New York Jets on December 11. It’s not until Week 15 that the Bills have their rematch against the Dolphins.

Several fans went to bat for Diggs on Twitter. One person tweeted, “This is the epitome of Dolphin fans: reaching for something that is CLEARLY not true, I’m no lip reader but you CLEARLY lying. Dolphin fans are ridiculous man nobody hates y’all team stop begging for haters we already threw y’all a bone with Tua be happy with what y’all got😂😂😂,” while another person wrote, “Lol you think he’s talking about a game in three weeks during another game? Give me a break. Dolphins fans trying so hard to matter.”

Kickoff time for the Bills/Dolphins game has yet to be announced and there’s a chance the matchup gets bumped from Sunday, Devember 18 to Saturday, December 17. The NFL will announce the Week 15 schedule after the conclusion of Week 13, per SI.