During the Buffalo Bills dominant 41-7 win over the Tennesse Titans on Monday Night Football, wide receiver Stefon Diggs had one of the games of his career. With Gabe Davis, the team’s No. 2 receiver ruled out with an ankle injury, he more than made up for his absence.

Diggs finished against the Titans with 12 receptions for 148 yards and three touchdown passes. Quarterback Josh Allen targeted Diggs 14 times with a 40% accuracy which is double the normal rate, per The Athletic.

After such a historic night, the two-time Pro Bowler broke the NFL record for most receptions caught by a player through their first 35 games with a team, Heavy Sports asked Diggs about the possibility of free agent wide receiver Odell Beckham Jr joining the Bills, as linebacker Von Miller is in the midst of a very public campaign to get his former Rams teammate to Buffalo.

The addition of Beckham could make a huge dent in the number of targets Diggs receives, but that’s not something the Bills star is concerned about. When asked if the three-time Pro Bowler would be a good fit in Buffalo, Diggs had zero hesitations.

“Yeah, 100%,” Diggs said. “I already talked to Gabe, he be taking my targets too. We got a lot of talent on his offense. So, like him being here would just be some more cherry on top. We got a good a** team right now.”

The 28-year-old receiver used a boxing metaphor to describe exactly what the three-time Pro Bowler could provide Allen on offense.

“Especially, considering the guy that we have, you know, he’ll be another little, extra little, Ugh, like that we’ve been working the jab for a while, and then we’d get the right hook in there. The guy that can come in and be spicy, be exciting, and make a lot of plays. So, you know, if it ends up shaking out that way, I wouldn’t be mad.”

Beckham gave a shout-out to both Diggs and Miller for the stellar performances against the Titans. He tweeted during Monday Night Football, “Hat trick ! @stefondiggs,” before adding, “I don’t think y’all really understand how goated @VonMiller is… On n offf the field!!!!

Bills General Manager Has Discussed the Possibility of Signing Beckham

I asked Brandon Beane if he'd be interested in exploring bring Odell Beckham Jr. to the #Bills pic.twitter.com/Ax5ov88784

“Anything Von says I’m going to respect,” Beane said. “Guys that have been around, knows what it takes, knows what it looks like. They’re going to offer up what they think — I’m going to give them the time of day. Why wouldn’t I respect what he thinks? He’s been great…. Von wants to win. And I want to surround myself with as many people like that as I can.”

As for whether or not the Bills could afford to bring in a player like OBJ, who appears strongly interested in being teammates with Miller and Diggs, Beane said the team is currently about $2.4 million to $2.8 million under the cap after adding up all 53 active players, those on injured reserve, and the practice squad.

“I know he’s recovering from an ACL… He’s a talented player. Show me a talented player that I’m not checking into. I’m always going to do that. Whether that’s trade for someone, let a guy get healthy. Again, this cap factors into it, too.”

While $2.8 million won’t be enough money to sign a player of Beckham’s caliber, where there’s a will, there’s a way, especially for a team that’s Super Bowl or bust.

The Buffalo News reporter Jay Skurski wrote on August 12, “Acquiring Beckham will require Beane to get even more creative with the cap than he already has. Beane has tried to limit just how far he kicks the can down the road in regards to the salary cap, but this is a special circumstance in which he would be justified in doing it again. Beckham’s that good.” 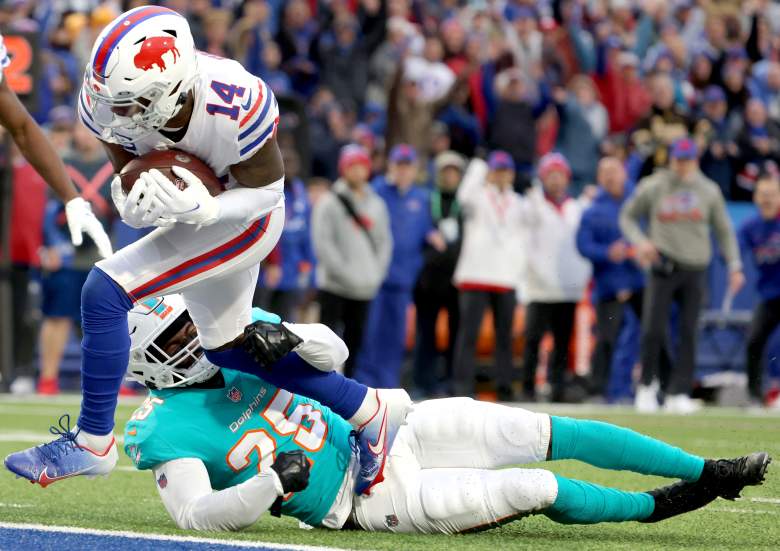 GettyStefon Diggs #14 of the Buffalo Bills scores a touchdown past Xavien Howard #25 of the Miami Dolphins in the fourth quarter at Highmark Stadium on October 31, 2021 in Orchard Park, New York.

The Bills (2-0) have steamrolled their opponents thus far, they’ve outscored opponents 72-17, thus far, however, their Week 3 matchup against AFC East rival, the Miami Dolphins (2-0) has unexpectedly shaped up to be a very interesting game.

Dolphins quarterback Tua Tagovailoa was named the AFC offensive player of the week after he completed 36-of-50 passes for 469 yards and six touchdowns against the Baltimore Ravens on Sunday, September 18, and he’ll look to keep that momentum going when the Bills travel to the Hard Rock Stadium in Week 3.

While it’s not Diggs’ task to shut down Tagovaila, he had nothing but praise for the Bills’ upcoming opponent, in particular, their receiving core.

“I did see the highlights,” Diggs said of the Dolphins/Ravens game. “I did see their offense. They look explosive. They got two good receivers, two exceptional guys that look amazing out there. And Tua is out there throwing the ball with confidence. They have a good team. It’s definitely gonna be another test for us. We look forward to it. Gotta prepare the right way.”

The Bills have defeated the Dolphins the last seven times the two teams have played. Buffalo enters Week as 5.5-point favorites to beat Miami.