The Buffalo Bills‘ matchup against the Kansas City Chiefs on Sunday, October 16, was a game the franchise had been preparing for since their overtime playoff loss to their AFC rival last January. Buffalo’s biggest offseason move was signing linebacker Von Miller to a six-year $120 million contract, with $51.4 million guaranteed, and they did so with this exact rivalry in mind.

While the final 13 seconds of last season’s divisional showdown has been discussed ad nauseam, it felt like a sick twist of fate when quarterback Josh Allen gave Buffalo a 24-20 lead with a 14-yard touchdown pass to tight end Dawson Knox, and there was still 1 minute and 4 seconds left on the clock.

For Chiefs quarterback Patrick Mahomes, that’s too much time, and Bills wide receiver Stefon Diggs knew it. Diggs, who did his part on offense, recording 10 receptions for 148 yards and a touchdown, made sure to whisper a message to Miller before the Chiefs had their final offensive possession.

After celebrating Knox’s touchdown, Diggs told reporters after the game that he found the eight-time Pro Bowler on the sideline and said, “Finish the game.”

Miller had already recorded four tackles, including two sacks and two for a loss, but the team needed a bit more from the two-time Super Bowl champion to clinch the win.

Broke down the game-winning INT for the Bills. Great call. Taron Johnson made the play but this is all about the threat of Von Miller. pic.twitter.com/cxBv5jlhKO

Mahomes’ first throw was an incomplete pass, but a penalty on Bills cornerback Siran Neal gave Kansas City the first down. On the next play, Miller rushed Mahomes out of the pocket, and with expert pass coverage from linebacker Matt Milano, they cleared the way for cornerback Taron Johnson to catch the game-winning interception over Chiefs receiver Skyy Moore.

“He’s a hell of a player, he’s a superstar,” Diggs said of Miller. “He’s one of those guys that you lean on,” noting how the team watched the last ten minutes of Netflix’s The Redeem Team for inspiration, a movie that follows Team USA’s journey to the gold medal during the 2008 Olympics. “Von is that guy we’ll lean on and is one of those players that we needed to make big plays when it matters most, and he did that.”

As for Johnson, he knows that clutch interception wasn’t a solo effort. “I’m thankful to have great teammates. Miller brings that extra juice, that swagger, and obviously that play-making ability is special,” the 26-year-old Weber State alum told reporters in the locker room after the game. While speaking with The Buffalo News, Johnson noted that he was particularly thankful for the pressure Milano and Miller provided before his interception. “And I see 2-4 (Moore) coming across the field, and just got in front of the pass.”

“We knew we needed to make a play,” Johnson added. “Last time, we didn’t make a play. So, just making sure that when we have the opportunity, just coming up with the ball.”

Miller Downplayed the Praise After the Game

Von Miller vs the Chiefs:

Bills head coach Sean McDermott had high praise for Miller after they clinched the win. “You could feel him out there the entire game,” McDermott said during the post-game presser. “He was phenomenal.”

Allen said of Miller, “I’m sitting there on the sideline during third downs like ‘C’mon Von, c’mon Von.’ And sure enough, he goes out there and makes a bunch of plays.”

For Miller, however, it was just another day at the office, doing what he was paid to do. “That’s why I’m here. That’s in the job description,” Miller said. “It just feels so good to come here with this great group of guys, man… Work so hard, out in all the sweat, all the long days in training camp to get here and come out on top.”

Of course, the job isn’t done when it comes to the Chiefs. “We’ll see the again,” Miller added. 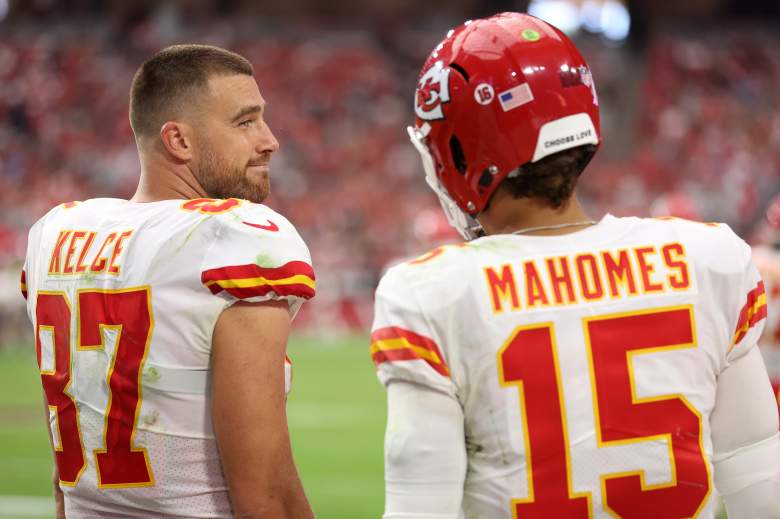 GettyTight end Travis Kelce #87 looks over at quarterback Patrick Mahomes #15 of the Kansas City Chiefs during the game against the Arizona Cardinals at State Farm Stadium on September 11, 2022.

Mahomes admitted after the game that the Bills’ final defensive play tricked him well. “I looked originally to a corner route, and he (Bills cornerback Christian Benford) had dropped back out,” Mahomes said. “I wanted to reset and throw it to him (Moore) fast, and Milano was in the way. By the time I reset and threw it to him again, 7 (Johnson) made a great play. It’s a good defense.”

As for Chief tight end Travis Kelce, he’s not surprised by Miller’s performance. “That’s a whole different element to the defense,” Kelce said, per The Athletic. “It’s just a guy that you have to account for on every single play. Even when you try and game plan for him, he still finds a way. That’s why he’s one of the greatest to ever play this game. He’s such a difference-maker, even in Year 12.”