Getty Sean McDermott of the Buffalo Bills talks at a press conference during Bills mini camp on June 14, 2022 in Orchard Park, New York.

The Buffalo Bills are wasting no time when it comes to carving the roster down. Less than 24 hours after their first preseason game against the Indianapolis Colts on August 13, the team announced their first round of cuts: offensive lineman Jordan Simmons, offensive lineman Derek Kerstetter, cornerback Olajiah Griffin, and tight end Jalen Wydermayer.

On Tuesday, August 16, head coach Sean McDermott and the Bills’ front office had until 4 p.m. ET to cut the team down to 85 players, however, they announced early in the morning that they were releasing not just one player, which would’ve cleared them under the NFL guideline, but two; bringing down the roster total to 84 players.

At 9 a.m. ET, the Bills revealed cornerback Tim Harris and linebacker Marquel Lee were being released, a tough break for both players considering this is the second time in two years that they’ve failed to make the 53-man roster.

Harris, 27, was initially drafted by the San Francisco 49ers in the 2019 NFL Draft. The Virginia alum’s first stint with the Bills took place last August. After failing to make the roster, he signed with the Cleveland Brown’s practice squad. However, Harris returned to Buffalo in November and signed with their practice squad.

After the Bills were eliminated from the postseason, the Bills signed Harris to a reserve/future contract on January 24, 2022.

Lee Signed a 1-year Contract With the Bills in March 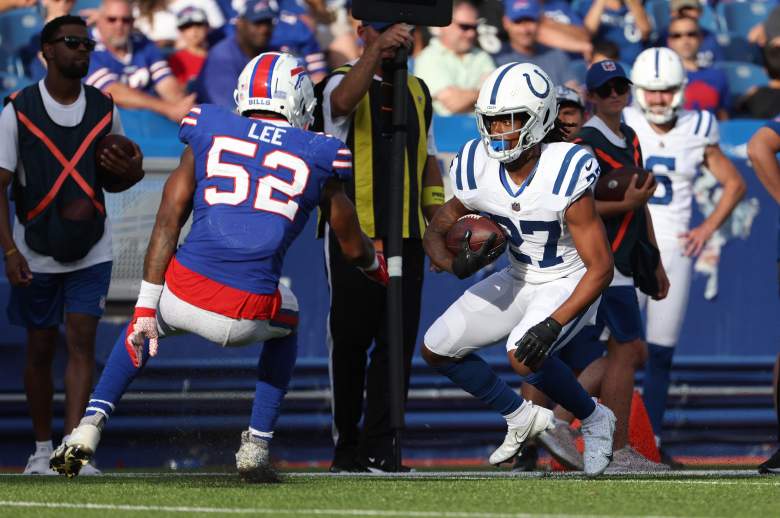 GettyDVonte Price #27 of the Indianapolis Colts runs the ball as Marquel Lee #52 of the Buffalo Bills tries to make a tackle during the second half of a preseason game at Highmark Stadium on August 13, 2022.

Lee was initially drafted by the Raiders in the fifth round of the 2017 NFL Draft but was waived by the team after a failed physical designation in August 2020. In March 2021, the 26-year-old linebacker signed a one-year contract with the Bills and was a part of the team’s offseason program and training camp before getting cut. During Buffalo’s preseason victory, he notched three tackles and broke up zero passes.

The former Niners’ linebacker, who’s started 19 of 45 games during his NFL career, has recorded of total of 115 tackles, six tackles for loss, and three passes defended. After going back to play for the Raiders last season, he signed a one-year deal to return to the Bills in March.

During the Bills’ 27-24 win over the Colts, Lee recorded three tackles, per SB Nation.

Will the Bills Add Another Player?

General manager Brandon Beane now has the team under the 85-player, which means the Bills could add one more prospective player before Tuesday, August 23, when the team has to cut the roster down to 80 players.

The final round cuts have to be made by Tuesday, August 30, when Buffalo will have to make some incredibly difficult decisions in order to bring the roster down to 53 players.

The Bills’ most recent signing happened on July 30, when they cut rookie Travon Fuller in order to sign former New Orleans Saints cornerback Jordan Miller, the latter of whom still remains on the team’s roster.