Getty Odell Beckham Jr. #3 of the Los Angeles Rams warms up prior to facing the Tampa Bay Buccaneers in the NFC Divisional Playoff game at Raymond James Stadium on January 23, 2022.

While Buffalo Bills linebacker Von Miller has been publicly campaigning for wide receiver Odell Beckham Jr. to join him in New York for months, the eight-time Pro Bowler made a bold announcement regarding his recruitment status during a recent appearance on The Richard Sherman Podcast.

Beckham, one of the most sought-after free agents in the NFL, has visited with his former team, the Los Angeles Rams, as well as the Saints, Giants, and Buccaneers. But according to Miller, Beckham is absolutely coming to Buffalo.

“Let’s be real,” Miller told Sherman. “It’s already said and done. He’s coming to the Bills. We’re down a couple of receivers, man… When it’s said and done, we know where Odell is going to be at man.”

While the team’s No. 1 wide receiver Stefon Diggs is healthy, the Bills’ pool of receivers is pretty dinged up heading into Week 5 against the Steelers. Gabe Davis is powering through an ankle sprain, Isaiah McKenzie is in concussion protocol, Jake Kumerow is out with a high ankle sprain, Jamison Crowder is being placed on IR (broken ankle), and tight end Dawson Knox is out (foot issue).

Miller was not predicting Beckham will join him in Buffalo, but firmly announcing it, and Yahoo! Sports senior NFL reporter Charles Robinson said no one should be sleeping on this comment. Robinson explained on his podcast. When it comes to Beckham, “The thought process was always, ‘Well, Odell is going to end up with the Rams. Of course. As soon as he’s back and once we get into November, and it really ramps up, this is the team he’s going to end up with,'” Robinson said.

Von Miller is dropping Odell Beckham Jr. hints for a reason. November is just around the corner, and as much as OBJ loves the #Rams and the L.A. life, the #Bills have entered the mercenary chat.#YouPodToWinTheGame

“But There’s was always that caveat, that ‘Well, let’s see what the rams look like’… and it’s not like Von’s not going to try and recruit this dude. It’s not like he’s going to sit there and not be like look at our quarterback, look at our situation. Hey man, it’s a short season just like last year. Be the merc. Blow it up. And then do what he were going to do last year, which was I went out and got the big deal, you were supposed to go out and do the big deal. Now, you get your opportunity.”

"I talk to OBJ probably every week."

Miller concludes with a smile…

"I think when it's time to get down the business, we already know where he's going to be at."#Bills pic.twitter.com/lSB5rmXiIZ

The 33-year-old edge rusher announced during a press conference on Wednseday that he speaks with his former Rams teammate every week to check in.

“OBJ is a vet in the league, too. He understands the way teams are built up, too. I’m sure when he looks at our team, he can see himself fitting in with our team.” As for Beckham visiting other suitors, Miller saw no issue. “Get the love, like he’s on the Super Bowl tour… but the way I like to think, when it’s time to start chopping the block, get down to business, we already know where he’s going to be at. In my eyes, I think I know where he’s going to be at.”

Robinson wrote on Thursday the history between these two players goes deep. “After all, Miller has always been a trusted and sometime persuasive friend in Beckham’s life and vice-versa. So much so, there was even a moment in the summer of 2020 that Miller broached the idea of figuring out a way to join Beckham in Cleveland. Beckham pushed back hard on that, perhaps anticipating the implosion that ultimately resulted in his release from the franchise last season.

“But as soon as Miller was traded to the Rams in early November, those inside Beckham’s circle started reiterating that age old message: Listen to Von Miller.” 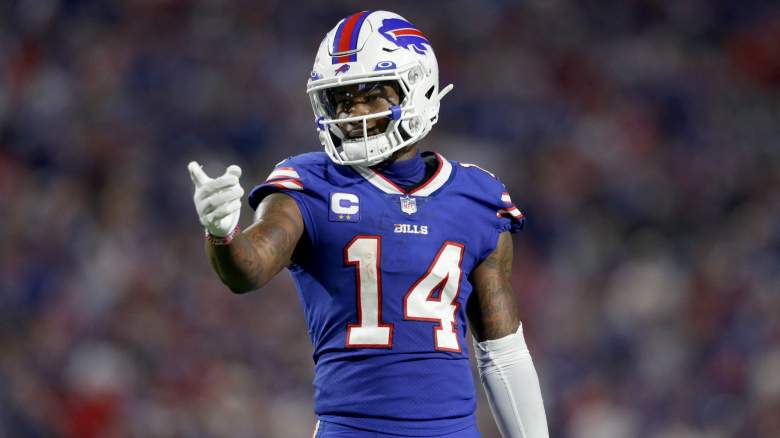 GettyStefon Diggs #14 of the Buffalo Bills points against the Tennessee Titans during the first half of the game at Highmark Stadium on September 19, 2022.

Heavy Sports spoke to Diggs last month about the possibility of Beckham landing in Buffalo, and while the addition could make a huge dent in the number of targets the Bills star receives, but that’s not something he’s concerned about.

When asked if the 29-year-old receiver be a good fit, “Yeah, 100%,” Diggs said. “I already talked to Gabe, he be taking my targets too. We got a lot of talent on his offense. So, like him being here would just be some more cherry on top. We got a good a** team right now.”

Diggs, 28, used a boxing metaphor to describe exactly what the three-time Pro Bowler could provide Allen on offense.

“Especially, considering the guy that we have, you know, he’ll be another little, extra little, Ugh, like that we’ve been working the jab for a while, and then we’d get the right hook in there. The guy that can come in and be spicy, be exciting, and make a lot of plays. So, you know, if it ends up shaking out that way, I wouldn’t be mad.”