Chicago Bears running back Tarik Cohen may be forced to miss the season while recovering from a torn ACL, but that hasn’t stopped him from supporting his teammates and offering in-game commentary on Twitter. During Chicago’s brutal 24-10 loss to the Los Angeles Rams on Monday Night Football, Cohen weighed in multiple times, often to hilarious effect.

Cohen, who just signed a $17.25 million contract extension with the Bears a little over a month ago, has become a key member of this Bears team, and his fun, light-hearted personality is a big reason why.

“We’re extremely excited about being able to extend Tarik,” Bears GM Ryan Pace said in a statement released shortly after Cohen’s extension. “He’s a versatile player who has a big impact on offense and special teams. We love his character and he’s been a spark plug for our team since we drafted him.” 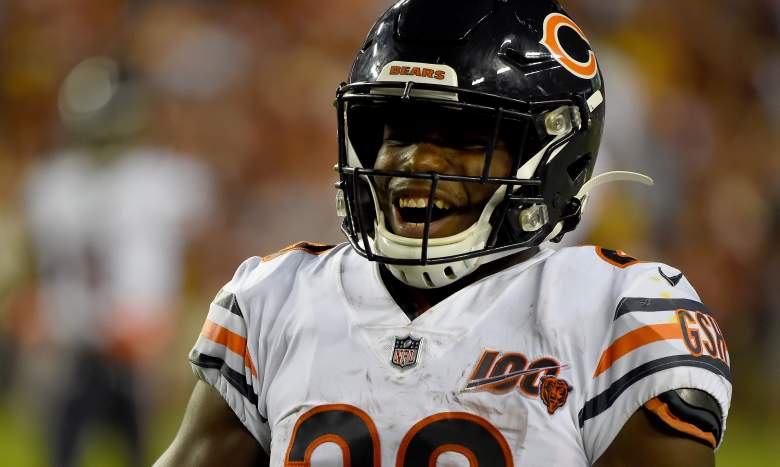 GettyChicago Bears RB Tarik Cohen had a hilarious reaction to his team’s 24-10 loss to the Rams on MNF. (Photo by Will Newton/Getty Images).

Presumably watching the game from home, Cohen began chiming in when the Rams jumped to a 17-3 lead in the third quarter.

First, Cohen kept it simple. “F*ck,” he Tweeted, before sending out a more encouraging message: “Just need a spark from defense/special teams,” he wrote shortly after.

Just need a spark from defense/special teams coming up to turn things around.

Then, as the Rams continued to add points to the scoreboard, he doubled down.

Later, when ex-Bears offensive lineman Kyle Long asked his followers for their respective reactions to what they were seeing from Chicago in three words or less, Cohen’s reply was all too true: “Need run game,” he wrote.

Bears Clearly Miss Cohen’s Presence — In More Ways Than One…

The Bears sorely miss Cohen in two phases of the game. An All-Pro punt returner, Cohen was always a threat to take it to the house as a returner, and without him, they’ve been relegated to dragging veteran Ted Ginn Jr. out to field punts — which he has yet to prove he has any interest in doing.

After Ginn’s abysmal showing as a returner Monday night, Twitter let him have it:

If Ted Ginn isn’t going to field a punt he needs to be inactive.

Ted Ginn Jr. should be cut first thing tomorrow. He’s absolutely useless offensively & has zero interest in fielding a punt. There’s zero room for that on any team. #Bears

Ted Ginn was the only spectator allowed into SoFi Stadium for this game.

Clearly, the Bears are missing Cohen’s shiftiness (and ability to actually catch punts) in the return department, but they’re also missing him in the run game. Chicago is ranked dead last in the NFL in yards per game (84.1), and he adds an element to their offense opposing team have to account for.

Plus, his wit and one-of-a-kind personality are undoubtedly missed in the locker room:

Cohen won’t return to the field until next season, but at least his commentary will be available on Twitter in the meantime.

Loading more stories
wpDiscuz
0
0
Would love your thoughts, please comment.x
()
x
| Reply
Tarik Cohen has some NSFW things to say about his team's loss, and he also summed up their offensive woes in three words...