Getty Nick Foles of the Chicago Bears talks to his teammates on the sideline in the second quarter against the Los Angeles Rams at SoFi Stadium on October 26, 2020 in Inglewood, California. (Photo by Joe Scarnici/Getty Images)

Well, that was beyond damning. Or, if you believe Nick Foles, it was all just a “miscommunication.”

Late in the fourth quarter of the Chicago Bears’ 24-10 loss to the Las Angeles Rams, Monday Night Football commentator Brian Griese — who played quarterback for Chicago in 2006-07 — shared an anecdote that made records scratch around the homes of Bears fans everywhere.

Saying he had spoken to Foles in the days leading up to the game, Griese revealed a particularly troubling story he says the current Bears quarterback told him:

“I was talking to Nick Foles yesterday, and he said: ‘Sometimes, play calls come in, and I know that I don’t have time to execute that play call, and I’m the one out here getting hit. Sometimes the guy calling the plays, Matt Nagy, he doesn’t know how much time there is back here,’ and so that’s something that they have to get worked out.”

Woof infinity. But is that really what Foles said?

Brian Griese on Nick Foles telling him Nagy sends in play call and Foles already knows the play won’t work because he won’t have enough time after snap. pic.twitter.com/NRo7rntR8F

When he was asked about what Griese told a national audience on television about Foles and his play-calling, Nagy said the following: “We’ve never had that conversation … I don’t know. You’ll have [to ask Foles] … Nick and I have a pretty good relationship and he hasn’t said that. I’m sure he’ll explain what he meant by that.”

Both Nagy and Foles came under fire on social media for their respective performances against the Rams Monday night, but neither threw the other under the bus, at least not during postgame interviews. When it was his turn to talk to the media, Foles chalked it all up to a simple misunderstanding on Griese’s part.

Nick Foles on Griese’s Comments: It Was a ‘Miscommunication’ 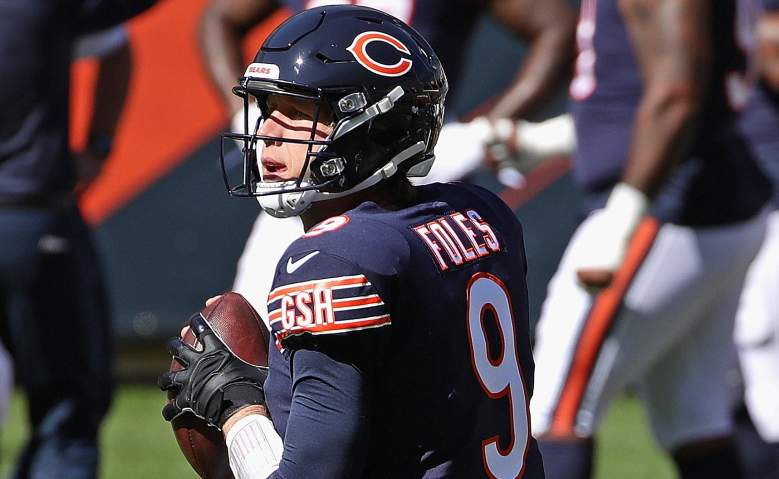 GettyQB Nick Foles of the Chicago Bears seems to have a bit of a miscommunication going on — with Brian Griese and head coach Matt Nagy. (Photo by Jonathan Daniel/Getty Images)

Foles did not deny speaking with Griese, but when he was asked directly about the MNF announcer’s comments, he said Griese’s interpretation of the situation was the result of a “miscommunication.”

When Griese’s remarks aired and made the rounds on Twitter — and they absolutely did make the rounds — they didn’t paint Nagy in a flattering light, and the remarks would explain all the timeouts the Bears have been burning on offense.  But Foles says he and Nagy are fine, and that Griese got it wrong.

So what did he and Griese discuss?

“We were talking about game situations and coach Nagy’s and my conversations and our relationship,” Foles said about the conversation he had with Griese, before discussing his current communications with Nagy. “I’ll say on the sideline, ‘Maybe we don’t have the time right now for this type of drop because of the pressure that they’re bringing.’ I think that’s a valuable conversation I’m able to have with him.”

Griese’s comments will most certainly follow the Bears around — at the very least, all week — or until Nagy and company find a way to make this offense look like it belongs in the NFL.

Read More
Chicago Bears, NFL, Nick Foles
It seems we have a case of he said, he said...