Former Chicago Bears guard Kyle Long is admittedly salty. The now-retired offensive lineman has had nothing but love for the Bears since retiring this past January, but when it comes to the team’s current head coach Matt Nagy, there doesn’t seem to be a whole lotta love lost there.

Long, who has always been a wildly entertaining Twitter follow, is now an analyst with CBS Sports, and he has made it known he will still be rooting for the Bears, thank you very much. He has been nothing but supportive of his former teammates and his former organization — just don’t expect him to root too hard for the head coach who was ready to send him packing.

During the Bears 19-11 loss to the Indianapolis Colts on Sunday, Long took to Twitter to call Nagy out more than a few times — all in good fun, of course — although he also admitted that there may be a wee bit of bitterness behind his tweets. Then, Monday morning, former Bears offensive lineman Ted Larsen joined Long in mocking their old coach.

Long and Larsen were teammates with the Bears in 2016, when John Fox was the head coach, and in 2019, under Nagy. Long didn’t hold back in his criticism of the Bears’ current coach Sunday during a game that saw Chicago’s offensive line get manhandled all day. He mocked Nagy being referred to as an offensive genius, sarcastically brought up Nagy’s Coach of the Year win in 2018, and also made a little fun of what Nagy was presumably telling his players during halftime to pump them up.

He was the coach of the year https://t.co/4BodmMOlHv

I love the replies to my coach of the year tweet pic.twitter.com/ro8xqLxFxa

I wonder what Nagy had to say to his team at halftime, and if he likes the result he is seeing in the 3rd quarter

Okay, I am salty. AND THATS OKAY

Then, Monday, Larsen joined in:

I feel like they really need a dance competition to get thinks back on track. Or an egg toss. One of those.

What’s Larsen referring to? He’s directly referencing activities organized under Nagy aimed at galvanizing the team while also having a little fun. Dance-offs and egg tosses are two of the things Nagy has done with this Bears group in the name of team bonding.

The Chicago Bears playing egg toss is the content we deserve 😂😂

Long Has Expressed His Indifference to Nagy & Bears Staff Before… 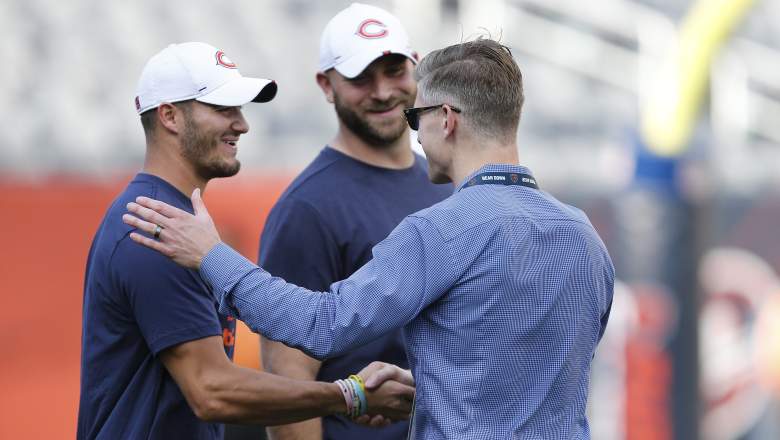 This isn’t the first time Long has been critical of Nagy. Since his retirement, he has tweeted that if he were to return to play for the Bears, it would have to be under a new staff. He also mocked Nagy’s “Be you” mantra multiple times. Still, he hasn’t been vitriolic about it; his jabs at Nagy have been good-natured.

“It’s a bottom-line business,” Long told The Athletic this May after he retired, also sharing the moment in 2019 he knew he was done playing for the Bears. “If No. 75 isn’t blocking the (man) in front of him, he has no place on our team. I respect that. When I spoke to Nagy, he essentially verbalized that, and I told him if I were him, I would have done this a long time ago because I hadn’t blocked (anybody) in weeks. The Bears took care of me for a long time when I was hurt. Guys don’t get two, three chances in the league. I did.”

Long played seven seasons in the league, all with the Bears. He only played in and started four games last year, his final year with the team.

Loading more stories
wpDiscuz
0
0
Would love your thoughts, please comment.x
()
x
| Reply
A few Members of the 2019 Bears took to Twitter to have a little fun at Matt Nagy's expense.