With just three games left in the regular season, former second overall pick Mitch Trubisky’s future in Chicago has been growing murkier by the week. After getting benched Week 3 in favor of veteran Nick Foles, Trubisky has recently returned to the starting lineup, and he has looked more than capable — albeit against bad defenses.

Trubisky has 776 yards, seven touchdowns, two interceptions and a rating of 103.2 in his last three starts — but he has also played against the 29th and 31st ranked defenses in that span too. It’s not a stretch to suggest that the next three games could go far in determining the future of Trubisky, as well as the franchise. If he continues to play well, it’s entirely possible Chicago tries to secure his services a bit longer. If he doesn’t, there are likely other teams who would be willing to give the former second overall pick another chance.

One of the teams that has been tossed around as a possible landing spot for Trubisky in 2021 is the New England Patriots– but don’t tell that to former Browns GM Michael Lombardi.

Lombardi on Mitch Trubisky: ‘He Can’t Be Fixed’

In a recent appearance on WEEI’s OMF, Lombardi, now an NFL analyst and insider, was asked about the potential crop of quarterbacks the Patriots could look at with Cam Newton struggling this season. When Trubisky’s name came up, Lombardi went off, and not in a good way.

“No chance. Have you watched him play? He can’t be fixed. There’s an instinct when your mama lifts you from the crib, you either have it or you don’t, right? MVP Mitch — there’s a reason why he didn’t go to Ohio State. If you’re willing to take that on and think that you can fix it, God bless you.”

The Patriots likely need a new QB in 2021. We threw some names at @mlombardiNFL to see if the Patriots should be interested.

Could Josh McDaniels Get Younger Version of Cam Newton in Trubisky? 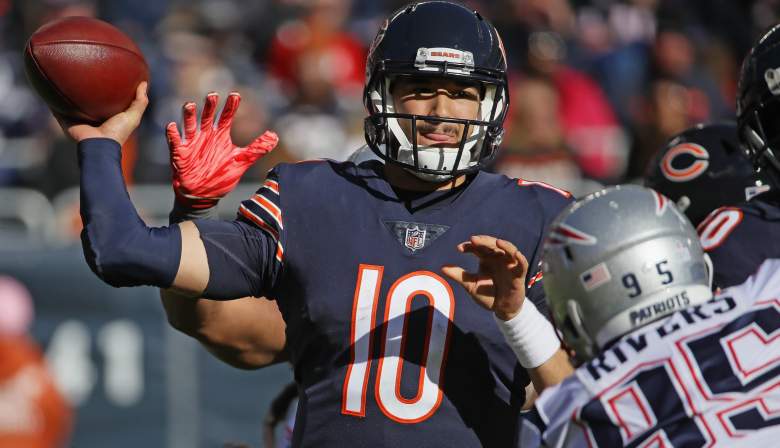 GettyQB Mitch Trubisky of the Chicago Bears could very well be a free agent in 2021. Would he be a good option for New England? (Photo by Jonathan Daniel/Getty Images)

The 26-year old Trubisky still has plenty of gas in the tank, and his mobility is a definite asset. Considering some are wondering about the strength of the Cam Newton-Josh McDaniels relationship, it’s equally interesting to ponder what Trubisky would look like playing under one of the most successful offensive coordinators in recent years.

In his best statistical season in 2018, Trubisky completed just under 67 percent of his passes for 3,138 yards, 24 touchdowns and 12 interceptions. He also ran for 421 yards and three touchdowns, so there is definitely something for McDaniels to work with. We’ll know soon enough whether the Patriots will have interest in Trubisky this offseason, but it’s clear Cam Newton won’t be the answer to Bill Belichick’s problems. Whether Trubisky could be the answer remains to be seen.

READ NEXT: Potential Bears GM Candidate is ‘Ready for a Super Bowl’

Loading more stories
wpDiscuz
0
0
Would love your thoughts, please comment.x
()
x
| Reply
One former GM and current NFL insider had A LOT to say about Mitch Trubisky possibly heading to New England in 2021...