Getty The Bears have a big decision to make about RB David Montgomery.

Whether the Chicago Bears will re-sign top running back David Montgomery is one of the burning questions surrounding the team this offseason.

Montgomery, who turns 25 in June, is heading into the fourth year of his $4,015,380 million rookie contract, and the Bears have a decision to make: They can sign him to an extension or risk letting him walk in 2023.

Montgomery has amassed 2,808 yards on 714 carries (3.9 yards per rush) and 21 touchdowns since Chicago selected him out of Iowa State in the third round (73rd overall) in 2019. In that span, has become one of the team’s top leaders and one of the best parts of the offensive attack.

Montgomery battled through injuries in 2021, and his grit coupled with a strong team-first attitude has made him a fan favorite, as well as a favorite at Halas Hall.

The fact that David Montgomery has played as well as he has despite battling through several injuries is impressive.

He's dealt with knee, shoulder, groin and glute issues, and he's still managed to be such a key part of the #Bears offense.

With Tarik Cohen a likely cap casualty this offseason, the duo of Montgomery and Khalil Herbert will take center stage in 2022, and one salary cap expert thinks it won’t take long for new Bears general manager Ryan Poles to secure Monty’s services for the foreseeable future.

Salary cap expert Brad Spielberger of Pro Football Focus spoke to Bill Zimmerman of SB Nation’s Bears Banter Podcast on February 23 about Montgomery’s future in Chicago, and Spielberger — who is also a Bears fan and occasional insider — thinks Poles is about to make Monty one of the highest-paid running backs in the NFL.

“We know he is a great locker room guy. He would eat glass if Ryan Poles asked him to eat glass,” Spielberger said about Montgomery. “All those things, when you are trying to establish a culture, and trying to get a locker room to buy in, those reasons and rationales aren’t always smart, but I really do, I think he’s going to get extended. I think it’ll fall in the $10 to $12 million per year range, maybe even more frankly. How it ages? Probably won’t be great but I do think that is a strong possibility.”

Spotrac has Montgomery’s market value projected at $12.9 million per year in 2023, which would put him among the league’s top-paid RBs along with Christian McCaffrey ($16 million), Ezekiel Elliott ($15 million), Alvin Kamara ($15 million), Dalvin Cook ($12 million) and Derrick Henry ($12.5 million).

Is Montgomery Worth That Kind of Cash? 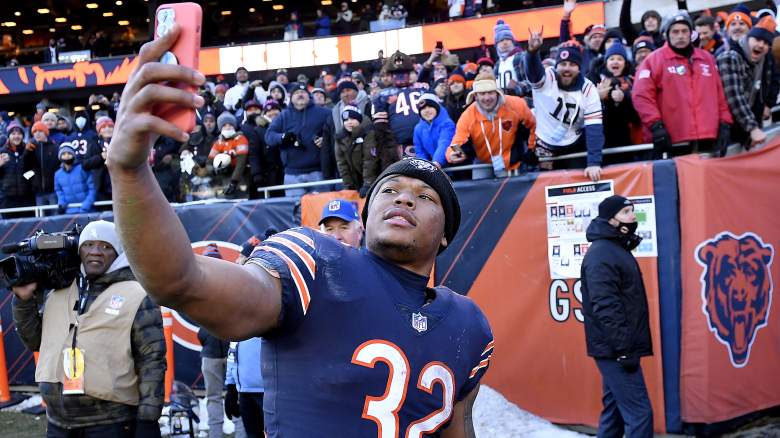 GettyRunning back David Montgomery is a fan favorite in Chicago.

The Bears have long-valued running backs, from Walter Payton to Matt Forte, but today’s NFL is different. Running back is currently a position where the highest paid (McCaffrey and Elliott in particular) have not lived up to the pricey extensions they signed. The Bears have to tread carefully with what they pay Montgomery, particularly because it’s more important to shore up the shoddy offensive line blocking for him first.

If the Bears fix their o-line issues and have enough cash left to extend Montgomery, they should — but they also shouldn’t over pay him, either.

For his part, Montgomery is going to continue to do what he has always done: Come to work every day, give 100% and continue to grind.