In a move that surprised no one, the Chicago Bears released veteran wide receiver Ted Ginn Jr. Wednesday morning, according to NFL insider Adam Schefter.

Ginn, who has been inactive a few times already this season, was being used primarily as a punt returner, and he wasn’t contributing much in that particular department. Chicago went and signed return specialist Dwayne Harris last week, and Harris made his debut against the Saints Sunday. It was clear after watching Harris that he was an improvement over Ginn, so this move was expected.

Ginn caught three passes for 40 yards this season, and while Bears head coach Matt Nagy had previously suggested he had plans to incorporate the veteran wideout into the offense, that simply didn’t happen, likely due to the emergence of rookie Darnell Mooney.

Ginn’s Job Was Lost Week 8, But Was in Jeopardy Before That

Nagy said the following about Ginn as to why he was inactive Week 2 this season: “Ted Ginn has been really, really good for us in a lot of different ways and he’s going to become an important part of this team as we go, and it’s nothing other than just probably numbers and where we were at personnel-wise today.”

That may have been the case Week 2, but it was clear Ginn was also outperformed by multiple players on the roster.

Things seemed to dim for Ginn a bit when his punt returning gig began. When the team’s All-Pro punt returner Tarik Cohen went down for the season with a torn ACL, Ginn took over, and left much to be desired in the return department. He averaged just 4.8 yards per return, but the primary issue was his penchant for not returning punts that were unquestionably returnable.

Once Harris hit the field Week 8, the difference between the two return men was glaring.

I think it’s about time to get Ted Ginn Jr. off of punt returns. Dude looks beyond uninterested out there. #Bears

Dwayne Harris catches and returns his first punt in a #Bears uniform for 12 yards. An infinite improvement over Ted Ginn Jr.

Darnell Mooney’s Emergence Made This Decision a No-Brainer 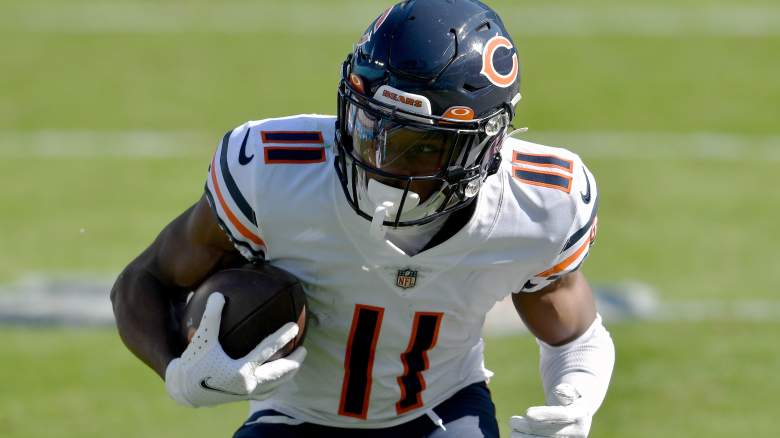 GettyWR Darnell Mooney of the Chicago Bears has emerged as one of the teams most pleasant surprises this season. (Photo by Grant Halverson/Getty Images)

Ginn played just 18 snaps on offense since the month of September, however, and his usage was virtually nonexistent on that side of the ball. The Bears signed him to a $1,050,000 contract, with $750,000 guaranteed, and while he was never expected to be a huge contributor, it was a bit surprising to see how little he was ultimately used.

The Mooney factor was a huge reason Ginn didn’t see the field much. The fifth-round draft pick has been one of the few bright spots for Chicago’s offense. Mooney is second on the team in receiving yards (305), third in yards per catch (11.7 yards) and he’s tied for third in touchdowns with two. When Nagy and company saw Mooney in action during games, they saw all they needed to see.

A 14-year vet, the 35-year-old Ginn still has some speed left, and he could very well catch on elsewhere if the fit is right.