Ugly. Embarrassing. Potentially franchise-altering. Those are just some of the terms thrown at the Chicago Bears during their lopsided 41-25 loss to the Green Bay Packers Sunday night. Both #firenagy — a reference to the Bears head coach whose seat just got hotter than the sun — and Jay Cutler hashtags were trending, each its own comment on how far the Bears have fallen since Matt Nagy’s 12-4 debut season in 2018.

The Bears have now lost 18 of their last 21 against the Packers, and whether Mitch Trubisky or Nick Foles is under center, the team’s offense has been among the NFL’s worst all season, and it seems as though it’s only getting worse. Chicago has managed just 14 third quarter points in 11 games, and Twitter let the team have it both during and after the game. Trubisky, who was responsible for three turnovers on the night, was also an easy target.

Chicago’s strong suit is supposed to be its defense. Entering their game against the Packers, the Bears were the No. 1 red zone defense in the NFL. That wasn’t the case Sunday night, when Aaron Rodgers and company carved them up and made it look easy. The Bears looked lazy, sloppy and tired, and the defense’s tackling reflected that. The Bears also had no sacks or quarterback hits on the night.

Announcer and Super Bowl-winning coach Tony Dungy noted during the second half that he felt as though the defense gave up, which was damning criticism, but he wasn’t alone in the sentiment.

It took 12 weeks, but the #Bears defense is now playing like the Bears offense.

The middle of the defense has been open all game long. On top of that, they can't tackle. #Bears

The Bears aren't pressuring Rodgers, but they're also leaving Packers open in coverage. This is a disaster for the defense.

This #Bears defense has just flat out given up.

Not since those Marc Trestman defenses have I seen a performance so uninspired, and those defenses had a fraction of the talent this unit has.

"That is the Bears' defense, basically, giving up here." – Tony Dungy

Za’Darius Smith alone has 3 QB hits for the Packers.

The argument for Nagy has been the team doesn’t quit.

Blow it all up. Thoroughly dismantled — coaching, talent and technique — when they still (theoretically) had something to play for. I'm seeing some quit out there that I don't recall seeing before.

Embarrassing. And I dont use that term often.

The criticism for Chicago’s defensive coordinator Chuck Pagano was also plentiful, and there were several calls for Pagano to lose his job.

Is Chuck Pagano in the building? Coach your defense sir! #Bears

It’s kind of interesting how the Bears had the top defense in the league a few years ago, but then Pagano took over as DC and it keeps falling further and further down each year.

Nobody’s scared of the once-vaunted Bears’ defense any more. Not since passive old Chuck Pagano put his stamp on them

The #Bears are supposed to have a good defense, yet their defense is playing like they're one of the worst in the league.

Chuck Pagano has been awful all year. He needs to go.

I’m thoroughly convinced that Chuck Pagano needs to be fired and replaced by Jay Rodgers the rest of the way.

The Bears’ season is toast. Nobody seems to care anymore. 2018 feels like a decade. It’s entirely on George McCaskey to wake up and fire everyone out of Halas Hall. 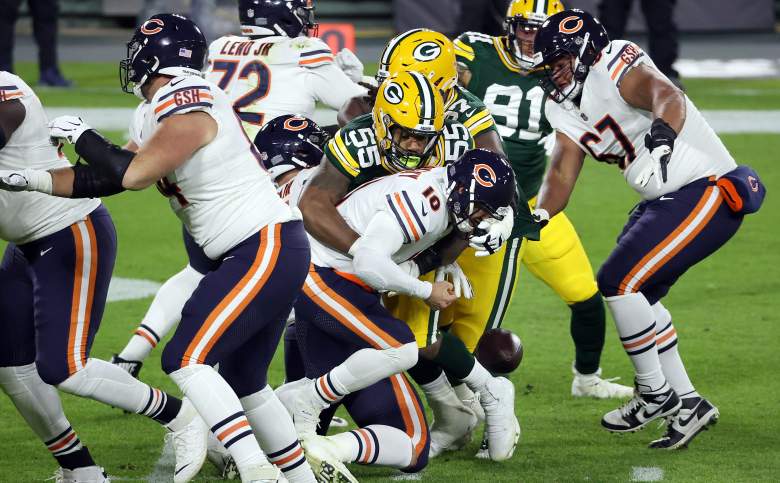 GettyMitchell Trubisky of the Chicago Bears fumbles the ball as he is hit by Za’Darius Smith of the Green Bay Packers during the 1st half of the game at Lambeau Field on November 29, 2020 in Green Bay, Wisconsin. (Photo by Dylan Buell/Getty Images)

Trubisky, who gave a fiery pre-game speech, didn’t bring that fire onto the field. The fourth-year quarterback made myriad errors, from his two interceptions and fumble that led to a Green Bay score to an ill advised decision to run out of bounds several yards behind the line of scrimmage instead of throwing the ball away — it was a total mess on offense for Mitch and the Bears, and Twitter did not hold back.

He still hasn't learned to throw it away instead of getting sacked?

“I think, if on offense, defense and special teams — if we can match the fans’ passion for this team, then I think that’s how you go out there and play with a lot of will and passion and put a good product on the field that you’re proud of. That’s all we want. We want the fans to be proud,” Trubisky said leading up to the game Friday.

Based on what we all saw Sunday night, there’s not a whole lot to be proud of if you’re a fan of the Chicago Bears.

Loading more stories
wpDiscuz
0
0
Would love your thoughts, please comment.x
()
x
| Reply
Fans and analysts alike roasted the Bears and Mitch Trubisky after their showing against the Packers Sunday night.