Getty Chicago Bulls guard Coby White handles the ball during a bout with the Atlanta Hawks.

Coby White’s pro hoops journey with the Chicago Bulls has been a roller-coaster affair thus far. After getting drafted seventh overall, showing out as a rookie and emerging as the team’s starting point guard in year two, the 22-year-old was thrown for a loop last season.

Despite his changing circumstances, the baller was able to put together a relatively solid campaign for the Bulls in 2021-22. Appearing in 61 games (including 17 starts), White averaged 12.7 points, 3.0 rebounds and 2.9 assists in 27.5 minutes per outing. He also connected a career-best 38.5% of his attempts from deep.

Nevertheless, Chicago has yet to extend his contract this offseason, which has led to questions about his future in the Windy City.

Whether he continues on with the Bulls or not, though, one league executive believes that the best is still yet to come for White.

Heavy.com’s Sean Deveney recently spoke to an Eastern Conference exec about White’s situation with the Bulls. And while the former North Carolina standout looks to be on shaky ground currently, the exec faulted the team — not the player — for how things have unfolded.

“The problem with Coby White is he came in with a bad team and all the Jim Boylen stuff, then they made changes and put him in a role he was not going to work in,” the exec said. “He’s not going to be your starting point guard. It probably hurt his reputation, that he was not a point guard, by putting him in that spot.”

If someone — be it the Bulls or some other team — could slot White in his proper place, however, the exec believes that he’d find himself flourishing once again.

“You’ve got to get him to the right role, a scorer off the bench who can pass a little bit. He will get his reputation back when that happens,” the exec said.

What Is His Ceiling in a Best-Case Scenario?

So, if it’s simply a matter of getting White into a role that suits him, what might his ceiling be in a world where a team actually puts him there? As the exec sees it, the combo guard could be right up there with some of the best sixth men to play the game in recent years.

“It’s like Jason Terry or Lou Williams or even Jamal Crawford when he was back in Chicago, guys like that  Their first couple years, they had to be point guards, then finally someone just says, let them go out there and score. Coby White probably will get to that point sometime, too.” 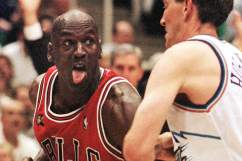