Getty Tight end Greg Dulcich, seen here gaining some yards after the catch for UCLA against Washington during a game in Seattle on October 16, 2021, was selected in the third round (No. 80 overall) by the Denver Broncos in the 2022 NFL draft.

The Denver Broncos may have found a potent new weapon for Russell Wilson with third-round draft pick Greg Dulcich, a tight end from UCLA. ESPN’s Todd McShay wrote about his favorite draft selection from each team, and Dulcich was McShay’s choice for the Broncos.

“(Dulcich) is the best seam-stretcher in this year’s tight end class, and I can already picture Wilson finding him deep for big gains,” McShay wrote. “Dulcich has long arms to make tough catches away from his body and the speed to separate and produce after the catch. His 17.3 yards per reception ranked second in the FBS among tight ends last season. Since Denver sent Noah Fant to the Seahawks as part of the Wilson deal, it needs a reliable tight end.”

Denver general manager George Paton spoke about Dulcich (6-foot-4, 243 pounds) in an interview the Broncos posted on YouTube on April 29.

“We think he’s a multidimensional tight end, a receiver, he can really run and catch, he blocks, he can do it all. He’s going to fit in well with our scheme,” said Paton, who also added, “He’s a really hard worker. I knew his high school coach, so I know a lot about this kid. He’s smart, he’s tough, he’s everything you want in a tight end.”

That high school coach is Jim Bonds, who was the head man at St. Francis High School in La Cañada Flintridge, California, for 20 years before he died in October 2020 after a battle with cancer, according to Pasadena Now. When Paton called Dulcich on draft night to inform him the Broncos were taking him, the GM Paton mentioned Bonds to Dulcich.

“Coach Bonds would be proud, wouldn’t he?” Paton said in an April 29 video of “the call” from the Broncos official team website.

Getting a Scholarship & Gaining Weight at UCLA

Dulcich was a walk-on at UCLA before earning a scholarship for the 2020 season, which he heard about when Bruins coach Chip Kelly called him on his 20th birthday, according to the Los Angeles Times. He had been a 210-pound receiver coming out of St. Francis, but he bulked up to 242 pounds and was listed as a tight end by the start of his breakout 2020 season when he led UCLA in receiving yards (517) and touchdowns (5) in the Covid-shortened, seven-game season, was named Second Team All-Pac-12 and was second in the nation in among tight ends with a 19.88 yards per catch average, according to the San Gabriel Valley Tribune.

Like McShay, Pro Football Focus liked Dulcich’s fit with the Broncos and mentioned Denver’s need at tight since the departure of Fant.

“The Broncos traded away Noah Fant and needed to add a body to the tight end corps and Dulcich can fit that bill. He has excellent ball skills and shows real wide receiver chops in a tight end’s body,” the PFF staff wrote in an April 30 story that graded every team’s draft (the Broncos got a B+ overall). “He has excellent athleticism and a really good feel for finding space and getting open. He will contribute to this offense.”

Dulcich will also contribute some flowing hair to the Broncos, as Denver coach Nathaniel Hackett mentioned in an interview the team posted on YouTube May 1.

“He’s got that great head of hair ill tell you that much,” Hackett said. “It was great talking to him. He’s such a great guy, and then you put the tape on and see him be the kind of player that he is, being able to stretch the field and being able to strain in the run game, we’re excited to have him.” 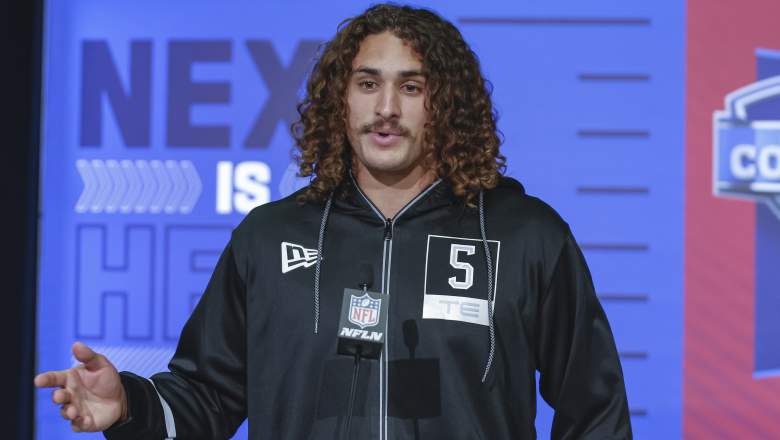 GettyFormer UCLA tight end Greg Dulcich, a third-round pick by the Denver Broncos in the 2022 NFL draft, addresses the media at the NFL Combine.

Dulcich Eager to Play With Wilson

Hackett’s excited feeling about Dulcich is mutual. The tight end is thrilled to be part of Broncos Country and can’t wait to catch some passes from Wilson.

“It’s been probably the best 18 hours I can remember in my life,” Dulcich said at his introductory press conference. “It was super special to celebrate it with my family and my number one support system and to be at an organization like this, it doesn’t get any better. Playing with a guy like Russell Wilson and with such history that this place has, it’s an honor to be a part of.”

Dulcich added that he’s already heard from his new quarterback, and one of Denver’s other tight ends.

“It was awesome getting a FaceTime from Russ (Wilson) last night,” Dulcich said. “I was like, ‘This is a Hall of Fame dude, this is the man, and he’s just Facetiming me!’ So that was just an honor. I’m excited to get out there and work with him. Al (Okwuegbunam, a third-year tight end for the Broncos) too texted me. I’m excited to be in the same room as him and a number of other guys. It’s super exciting. It’s a great family here, I can already tell.”

Loading more stories
wpDiscuz
0
0
Would love your thoughts, please comment.x
()
x
| Reply
The Denver Broncos may have found a potent new weapon for Russell Wilson with third-round draft pick Greg Dulcich, a tight end from UCLA. ESPN’s Todd McShay wrote about his favorite draft selection from each team, and Dulcich was McShay’s choice for the Broncos.