The 2022-23 season figures to be a huge one for the Golden State Warriors, and not just because the team will be defending its NBA championship. As much as anything, the campaign will determine what kind of future the Dubs’ youth contingent can have, and how that will affect the franchise’s long-term trajectory.

For his part, Jordan Poole has already cemented himself as a foundational piece. However, players like Jonathan Kuminga, Moses Moody and former No. 2 pick James Wiseman will all have a golden opportunity to carve out new roles for themselves.

Despite his draft status, Wiseman may be the biggest question mark of the bunch. And while the team will undoubtedly do what it can to help him succeed, one analyst believes that he’s in a sink-or-swim situation.

Make no mistake, Wiseman finds himself in a different spot than your typical No. 2 pick entering year three in the Association. As pointed out by Bleacher Report’s Zach Buckley pointed out that many expect a third-year jump in growth for high-level prospects. However, fans — and the Warriors themselves — should probably temper some of those expectations for Wiseman.

After all, the 21-year-old has had precious little floor time to help him develop after a meniscus tear cost him much of his rookie season and the entirety of his sophomore year.

As Golden State attempts to develop its youngsters and win another chip at the same time, though, Buckley says the club won’t be handling the 21-year-old with kid gloves.

“The Warriors can’t afford to wait for him to get on track. If he isn’t ready to contribute to their championship defense, they’ll simply look elsewhere at the center spot,” Buckley wrote in an August 25 story about the pressures facing Warriors players.

Whether that means that we’d see more of Draymond Green at the five or that team president Bob Myers would make a play for Myles Turner or Jakob Poeltl or another veteran center is unclear. In any case, Buckley wrote that Wiseman has the ability to prevent any of those scenarios from playing out.

“He has to prove he belongs in the rotation, but if he can do that, he could command a sizable role in it given the different dimensions he could add with his length and athleticism.”

Other Dubs Feeling the Heat

In addition to Wiseman, Buckley name-checked Poole and Andrew Wiggins as Dubs players who are feeling the heat.

Both players are facing extra pressure to perform in large part due to their contract situations he wrote:

Players who see [production spikes like Poole’s] are always under pressure the next season to prove the sustainability of those stats. In Poole’s case, though, the pressure grows even greater when considering he needs a new deal between now and next summer.

The only question now is whether Wiggins can [repeat his All-Star performance from ’21-22]. If he does, he could collect a lot more than additional individual accolades. His contract is set to expire after the season, and if he again executes at a high level on both ends, he might just position himself for a max-contract payday. 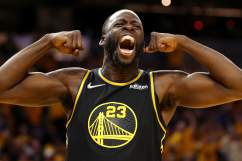 Loading more stories
wpDiscuz
0
0
Would love your thoughts, please comment.x
()
x
| Reply
The Golden State Warriors look to have opened up a pathway to playing time for former No. 2 overall pick James Wiseman, but the team can't coddle him.