After the Golden State Warriors beat out the Celtics in the NBA Finals to secure their fourth title in eight years, questions immediately arose about whether the club would be able to keep its championship roster together. Turns out it couldn’t, at least not entirely.

Part of the reason why team president Bob Myers let so many rotational players walk was to open up playing time for the team’s youngsters. Jonathan Kuminga, James Wiseman and Moses Moody have officially been unleashed. However, there was also a financial aspect in play, as the Dubs’ historically high luxury tax penalties continue to balloon.

With that being the case, one has to wonder whether other players might be shown the door solely to save money. Like Andrew Wiggins, who’s slated to become a free agent after collecting $33.6 million next season.

Would the Warriors really be willing to cut ties with Wiggins after he played such a large role in bringing a chip to the Bay? It would be an unfathomable occurrence for Dub Nation and, according to one league executive, there’s little chance the Warriors will go in that direction… for the time being, anyway.

In discussing Wiggins’ Warriors future, a Western Conference exec told Heavy.com’s Sean Deveney that the former No. 1 overall pick will almost certainly be balling in blue and gold next season. However, they also conceded that Myers could get more out of him right now — as a trade piece — than ever before.

“Obviously, they are not going to move him now, off of a championship where he was such a big contributor,” said the exec. “But he is at his maximum value right now. It would be the right time to trade him, just, they can’t really do that.”

So how does the exec see the situation playing out?

“It is likely that they will talk about an extension, maybe get him locked up, then look to trade him when his contract is secure.”

In other words, Warriors fans can rest easy knowing that Wiggins will be there to go for the trophy again next season. After that, though, it’s anyone’s guess how things will shake out — and the best move may just be to move on.

Wiggins Got an Image Makeover

What’s incredible with all of this is that just a few, short years ago Wiggins was considered one of the game’s bigger disappointments. He was a player who seemingly held more value as a large salary for use in a star-grabbing trade than someone who contributes to winning games.

Now, that script has flipped.

“It is funny, he was just viewed as contract filler in potential trades for so long but he is now someone other teams want, he has completely remade his image,” said the exec. “He’s 27. If you are the Nets or Mavs or Pelicans someone looking to be competitive quickly, he’s got to be on your list.

“The view of him around the league has changed 180 degrees.” 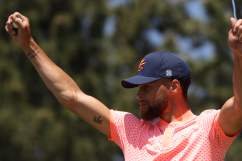