Getty Golden State Warriors forward Andre Iguodala warms up prior to Game 6 of the 2022 NBA Finals against the Boston Celtics.

If the Golden State Warriors‘ victory in Game 6 of the NBA Finals proves to be Andre Iguodala’s final game as a professional player, the old baller definitely went out with style. The 2015 Finals MVP secured his fourth championship ring with the Dubs’ title-clinching win over the Boston Celtics.

And while a largely new cast of teammates joined him for the latest chip, there were more than a handful of through lines between this and earlier title runs, starting at the very top with Stephen Curry, Klay Thompson, Draymond Green and Steve Kerr. They weren’t the only old-timers who joined Iguodala in celebrating the club’s big win in Beantown, though.

In the aftermath of the Warriors’ locker room celebration, Iguodala updated his Instagram story with a snap of himself feeling the moment alongside a trio of former title-winning teammates (embedded below).

Namely, Zaza Pachulia, Leandro Barbosa and Shaun Livingston, all of whom have been doing work with the team in their post-playing careers.

Andre, Zaza, Livingston, and Barbosa linked up with the Larry O last night 🏆

Thanks to injuries, Iguodala was unable to fulfil the on-court role that the Warriors had envisioned for him during the Finals. Over four appearances against the Celtics, the 18-year veteran played a grand total of 19 minutes.

But his contributions off the court and on the sidelines were invaluable throughout the Dubs’ incredible postseason run.

“He’s like an assistant coach, only one who the players can rely on for real-time advice,” Kerr said earlier in the playoffs, via NBC Sports Bay Area. “He’s actually guarded all these guys that we’re going to face.

“That kind of hands-on advice, player to player, is really important… That’s been part of his role all season long, he’s a mentor for these guys. He feels really strongly about passing on his knowledge. He’s talked about how when he got into the league he had his own vets who mentored him and realized later on in his career how important he can be for his younger teammates.”

Iggy Sounds Off on the New Warriors

Along with the Steph-Klay-Dary core, Iguodala has enjoyed a front-row seat to the Warriors’ wild saga throughout the years. He couldn’t help but marvel at the years-long journey in the immediate aftermath of Golden State’s title victory, while taking additional pride in the exploits of the new generation.

“This one was a lot of weight just because of all the shots, you know, each championship they threw at us,” Iguodala said. “Finals MVP in the first one and KD — best player in the world — you know, trying to say that was unfair. And then you go a year where you win, what, they win 15 games and, last year, not being able to get to the playoffs…

“For everything to come back together the way it did with me leaving and then coming back and different role, different capacity, and then having amazing teammates and a different set of like supporting cast. [Gary Payton II] was huge for us. Earned himself a big payday this summer. Really happy for him, Wiggins, Jordan Poole, the growth of those guys…” 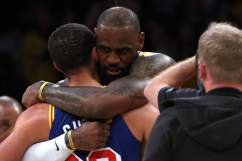