As if winning his fourth championship ring, netting NBA Finals MVP honors and hosting the ESPYs wasn’t enough for Stephen Curry, the Golden State Warriors star Stephen Curry is suddenly permeating the sporting world at large. And it’s all happening thanks to his “Night, Night” celebration.

Like Cam Newton’s Dab before it, Steph’s new go-to move after ending opponents with clutch buckets has become a veritable phenomenon, showing up in all kinds of other places.

People ranging from Brewers outfielder Andrew McCutchen to FC Barcelona wing Ousmane Dembele to random child hoopers are breaking it out on the field of play, going viral for their efforts. And when the folks over at 2K Sports revealed that the celebration would be in the NBA 2K23 video game, it was major news.

As Curry tweeted after Dembele did his thing: “It’s a movement.” That said, the latest Night, Night appearance may be the biggest of the bunch.

Neymar Puts the Ball to Bed

Brazilian soccer superstar Neymar hit the pitch at Parc des Princes on Saturday for Paris Saint-Germain’s latest bout with Ligue 1 rival Montpellier. In typical Neymar fashion, he made his presence known in a big, bad way, too, scoring two goals in the contest.

However, it was his second goal that stood out to the Dub Nation denizens.

Up two-nil in the 51st minute, PSG was on the attack once again when an Achraf Hakimi cross was deflected by a Montpellier defender. The ball quickly found its way to Neymar, who headed it past charging goalkeeper Jonas Omlin and into the net for his second goal.

After taking off down the pitch and celebrating with his teammates, Neymar eventually threw up the Night, Night pose. PSG went on to win the match 5-2, improving to 2-0 on the young season in the process.

Steph’s Explanation of the Celebration

During Game 2 of the Dubs’ Western Conference Finals matchup against the Dallas Mavericks, Steph side-stepped Mavs star Luka Doncic to nail a back-breaking triple from the left wing. As the ball flew through the air, Curry could be seen mouthing the phrase “Night, night.”

Once the cowhide globe hit home, he rested his head against the pillow made by his hands and held the pose as he backpedaled down the court. To date, it’s probably the filthiest example of Curry putting his opponents to bed (or, rather, laying them to rest).

After the contest, the Warriors’ cornerstone did his best to explain the celebration.

“Just having fun,” Curry said, via The Athletic. “You talk about having kids, you know how bedtime routines are important. It’s the final signal for a job well done that day.” 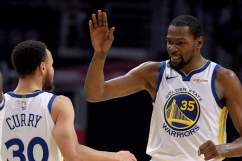