When you stop and think about it, the fact that the Golden State Warriors are two wins away from capturing the championship is kind of a miracle. Sure, this is the same lot that has played in six of the last eight NBA Finals and captured three titles along the way, but some incredible odds were overcome for the Dubs to get back to the dance this season.

There was the departure of a top-10 player in Kevin Durant, devastating injuries to Klay Thompson (twice), Stephen Curry and James Wiseman and, finally, the rise of multiple other contending teams. But here they are, back in the saddle again nonetheless.

According to Steph, this is hardly Golden State’s last hurrah, though. He, Klay and Draymond Green may all be on the wrong side of 30 — and Andre Iguodala is on the brink of retirement — but the two-time league MVP is of the firm belief that there’s more winning left to do.

When the subject of the Warriors’ old-ish core being in this position came up on Sunday, Curry left little doubt about his confidence moving forward.

“I’ve said it plenty of times: We have a lot left in the tank in terms of what we can do out there on the floor,” he said. “You bring up the age thing. It’s something to talk about, but it doesn’t really reflect how we approach this playoff journey and our confidence, what we can do going forward.

“But that doesn’t happen by accident. It’s just the work that you put into it.”

As Steph sees it, Thompson’s incredible comeback journey exemplifies the effort, care level and dedication to winning that will keep the Warriors in the conversation beyond 2021-22.

“The fact that he was on a minutes restriction for like a month, and slowly got to ramp it up every couple weeks leading up to the playoffs, and then he was so proud of himself when he first eclipsed 40 minutes in a regular-season game one time. Just the pride — he talked about it that like a year ago, he wasn’t even running,” Curry said.

“It just speaks to how much this matters and how much work goes on behind the scenes for being ready for whatever happens out there in the games that matter. We are obviously only worried about right now, but we definitely feel like we have a lot left in the tank.”

On the morning of Game 5, the hoops staff at Bleacher Report updated their predictions on whether the Warriors or the Boston Celtics would come out on top in the title bout. For their part, Andy Bailey and Dan Favale sided with the Dubs and made Curry their Finals MVP pick.

“I’m sticking with the Warriors in seven,” wrote Favale. “Their peaks within this series, while less frequent and more abridged, have been appreciably higher. The Celtics may, in fact, be the better team. But the Dubs have this series’ best player, in Stephen Curry, and it isn’t even kind of close.”

Meanwhile, Eric Pincus is staying true to his original Boston pick — and going with Jayson Tatum as his series MVP — but he, too, understands what the Warriors star brings to the table.

“The pick doesn’t change, but confidence in that selection is certainly shaken by that singular threat in Steph Curry.” 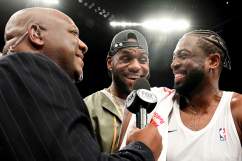 Loading more stories
wpDiscuz
0
0
Would love your thoughts, please comment.x
()
x
| Reply
Golden State Warriors star Stephen Curry has some thoughts about whether his team can compete for the NBA championship in the years to come.