Jordan Love has started just one game in his young NFL career, and as a result, his potential remains a mystery.

But based on his collective body of work over the last few years, the Green Bay Packers quarterback hasn’t instilled much confidence that he can lead a team according to Bob McGinn of Go Long.

McGinn graded the performance of the Packers on both sides of the ball, and he saved some of his most critical remarks for the 23-year-old QB, whose future in Green Bay seemingly hangs on the decision of Aaron Rodgers, who is coming off back-to-back MVP seasons.

“No one knows if he can play,” McGinn wrote about Love on February 15, before going into detail about what his sources are saying about the young signal caller. Spoiler alert: it’s not good.

ALL the latest Packers news straight to your inbox! Join the Heavy on Packers newsletter here!

McGinn: Not Much Optimism About Love’s Future

The Packers have made it clear they want to roll with Rodgers as long as the veteran QB wants to stick around, but what that may mean for Love, who Green Bay selected with the 26th overall pick in 2020, is anyone’s guess.

“In limited exposure, Love didn’t engender much optimism about his future. In 2020, the Packers thought more of Tim Boyle’s chances to win a game than Love’s, and Boyle was No. 2 all year. Elevated to No. 2 by default this year, Love went 0-2 in exhibition starts, 0-1 in a regular-season start and 0-1 when given the entire second half in Detroit. In 11 quarters of action Love has generated 31 points,” McGinn noted, adding an executive in personnel for an NFC squad didn’t have encouraging things to say about Green Bay’s future if Love is leading the way.

“You see the athleticism, the quick release, the quick game stuff he’s been in,” the exec told McGinn shortly after the season. “You definitely see natural ability. But there’s a lack of awareness and experience. When things break down he will make a bad decision. If they had to start him next year it’d obviously be a big step back as a team.” 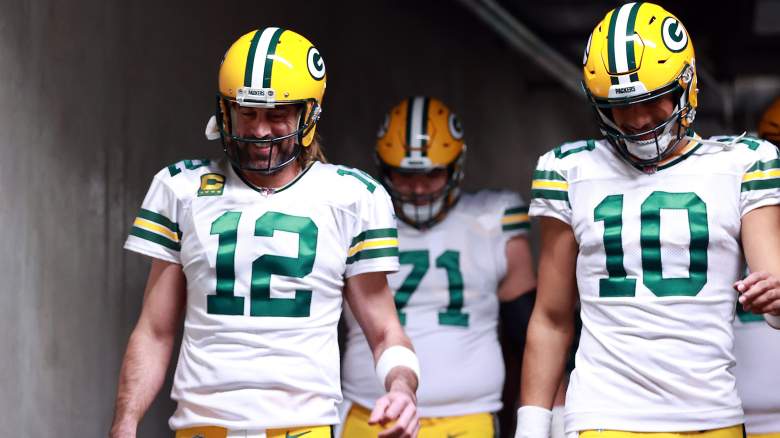 GettyThe decision of Aaron Rodgers will have significant impact on QB Jordan Love, as will team’s new additions to the staff.

With former Packers quarterbacks coach Luke Getsy becoming the new offensive coordinator for the Chicago Bears and former OC Nathaniel Hackett taking over as the new head coach of the Denver Broncos, McGinn also thinks the turnover could have a negative impact on Love.

“The road ahead for Love became more difficult with the departures of quarterbacks coach Luke Getsy and offensive coordinator Nathaniel Hackett. Besides Matt LaFleur, those had been his primary tutors for two years,” McGinn surmised, before referencing Love’s time in college at Utah State. “It should be remembered that Love’s collegiate career nose-dived in 2019 after coach David Wells and offensive coordinator David Yost departed for Texas Tech and coach Gary Andersen’s shotgun offense with the Aggies was coordinated by Mike Sanford,” he added.

Love threw 32 TDs and just six interceptions as a sophomore, but tossed 17 picks the following year after West and Yost left, leading the FBS in interceptions in 2019. It all depends on Rodgers, of course, but if Love has to be “the guy” in Green Bay moving forward, consider the reset button pushed.