Not everyone is sold on the Los Angeles Lakers as title contenders, specifically comedian and reoccurring Undisputed talking head Michael Rapaport.

Rapaport has been one of the Lakers’ loudest critics and he had some hash criticism of the Lakers personnel, specifically guard Alex Caruso.

“Do you actually see a championship being delivered by a guy — this gentleman Alex Caruso,” Rapaport said. “I’m telling you, he works as a Dominos pizza delivery man in the offseason. He’s delivered me pizza in the pandemic. Do you see that guy bringing you a championship, when you know big shots will have to be taken?”

Caruso has taken flack over his career for his unassuming look. There’ a reason he’s called the “Bald Eagle” by JaVale McGee. But Caruso has been playing key minutes so far in the Lakers first-round series against the Portland Trail Blazers. He logged 29 and 17 minutes in the first two games and has been a big part of the team’s efforts to slow down Portland’s stellar backcourt of Damian Lillard and CJ McCollum.

Caruso knew it wouldn’t be easy to slow down the mighty Blazer duo, which he spoke on before the series started.

“I wish there was a one size fit all kind of answer for that. They can do so much,” Caruso said. “We’re not going to tell any guy on our team to hold them to 20 points. Me, KCP, Danny, we’re going to do our best to pester them.”

Alex Caurso on guarding CJ/Dame: "I wish there was a one size fit all kind of answer for that. They can do so much. We’re not going to tell any guy on our team to hold them to 20 points. Me, KCP, Danny, we’re going to do our best to pester them." #Lakeshow

Caruso hasn’t been lighting up the box score, but digging a bit deeper reveals the impact he’s had on the game. In the Lakers Games 1 loss, Caruso still managed to finish +12 in his 29 minutes. In Game 2 he was +11 in his 17 minutes, despite other guys getting minutes late during a blowout. 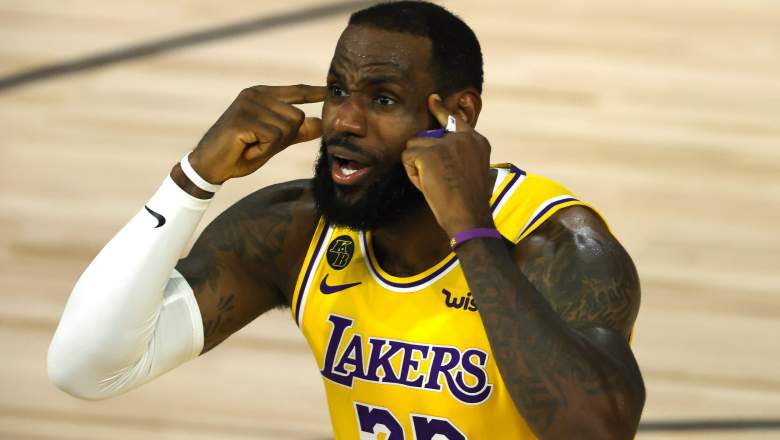 Rapaport also took aim at LeBron James, who is coming off one of the more modest playoff performances of his career, logging 10 points, six rebounds and seven assists. Asked if the Lakers looked like a championship contender, Rapaport pointed to the recent performance from James.

“Absolutely not,” Rapaport said. “When their best player scores 10 points, I don’t think that looks like a championship team. I’m worried about the gas tank getting empty on Mr. James.”

Rapaport then doubled-down on his belief that James is on his way out of the league, even calling Orlando the four-time MVP’s “Last Dance.”

“He’s getting old, the grey beard. It’s happening,” Rapaport said. “He’s the guy that needs the most rest. I don’t know if he has his special juices, vitamins and blenders, all that stuff we are used to in Los Angeles. I’m telling you LeBron James is going to tank out during these playoffs. If it ain’t the Portland Trail Blazers, it will be against Utah or Denver.”

In Year 17 of his NBA career, James is an MVP finalist. He led the Lakers to the top seed in the Western Conference and also was the leading assist man in the league. If James’ gas tank is truly emptying — which it doesn’t appear so — he’s learned how to get the most out of what fuel remains.

We know the Blazers expended a lot of energy and emotion, probably the most of any team in the bubble between the eight games and the play-in game. Just like winning Game 1 was one game, this was just one game.

“It’s a long and winding bubble. The Blazers are going to bounce back. This series is just getting started.”