No matter how many titles LeBron James wins, he’ll never escape the continuous stream of commentary from those determined to somehow downplay his greatness.

The latest bit of slander thrown the Los Angeles Lakers star’s way came from Rob Parker in a column for Deadspin. Parker gained notoriety for his spots on shows like Undisputed and First Take, and his column sounds like some baseless banter you’d hear out of Skip Bayless’ mouth, accusing James of “cheating the game” and taking the easy way out on the way to greatness.

“LeBron hasn’t gotten his full due from the masses for a simple reason. He cheated us, cheated the game,” Parker wrote. “James cheated us from his journey. We wanted to see the blood, sweat and tears. We wanted to hear all the naysayers doubt his ability and talent. Most of all, we wanted to see him finally break through and punch his ticket as the prodigy that was promised when he came to the league straight from high school. … LeBron took the easy way out. Instead of fighting for his place in NBA lore, he simply joined the guys he believed he couldn’t beat on his own.” 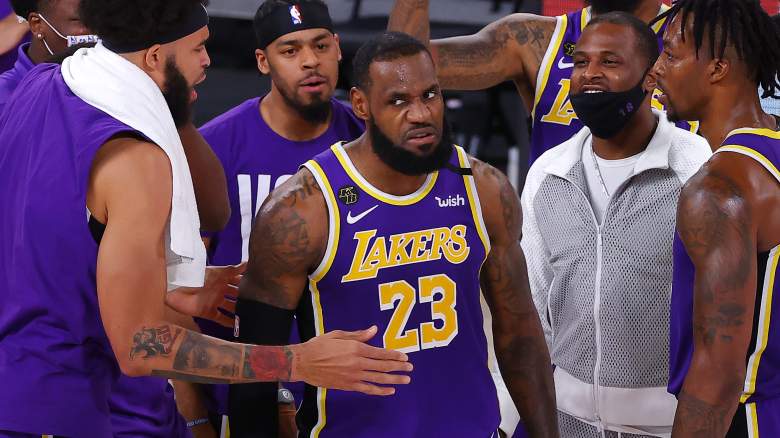 Criticizing James for teaming up with other superstars is nothing new, but it’s a worn-out topic. In his 17th season, James was the best player on the Lakers, leading the league in assists at 10.2 per game and averaging 25.3 points and 7.8 rebounds to go with it. Of course, having Anthony Davis by his side helped, but it’d be very hard to say James was cheating the game. He finished second in MVP voting and steamrolled countless records during another stellar year where he showed little to no dropoff.

UP IN 💨 TOUR. WHAT THEY GONE SAY NOW?!?! I know they’ll make up another criteria that nobody else has ever had in the history of the game. But Guess what though, bring it on please!! Heavy is the head that holds the 👑 they say. Let’s get it! #ThekidfromAKRON🤴🏾 #RevengeSZNCompleted😉

But Parker continued, saying James ” fled like a scared rabbit” out of Cleveland and Miami, and that his move to the Heat damaged the NBA in irreparable ways. But Parker saves his best for last, signing off with a parting shot, responding to James’ demand for respect after winning his fourth Finals MVP, writing: “Respect isn’t given. It’s earned.”

James winning another title inevitably stirred up the greatest of all-time conversation, which the Lakers superstar wanted no part of.

“That’s not for me to question, or wonder, or debate. I think that’s what you guys will do,” James told ESPN’s Rachel Nichols after winning the title. “For me personally, I just have a way that I play the game. I have a way that I lead. I have a way that I challenge my guys and challenge myself. But more importantly, at the end of my career, I just hope I made a lot of people proud, for the way I approach the game. That’s all that matters to me. There’s going to be debates. That’s what it’s all about. We call it barbershop talk. People are going to do it.”

Sat down with LeBron & Anthony Davis for a post-championship conversation – on the partnership that powered the Lakers, whether LeBron wanting some "damn respect" means ranking him over Michael Jordan, plus just how much of a long-term future they both see for themselves in LA: pic.twitter.com/R0zU4cMGRH

Someone who was willing to weigh in was Lakers great Magic Johnson, who played a role in bringing James to Los Angeles. He still thinks James need another title to overtake MJ.

“LeBron James is well on his way. If he wins one more [championship], Michael and him are going to be right there together,” Magic said during an appearance on ESPN’s First Take. “If he gets that next [championship], it’s going to be hard not to say he’s right there with MJ. I said the next one, which will be five [for LeBron], because with six [for Jordan] and four [for James], it’s hard to say he’s overtaken Michael at four championships. I think once he wins [a fifth title] and repeats — the key word is repeat — that’s a good argument right there.”

If LeBron wins ring No. 5, @MagicJohnson would consider him equal to Michael Jordan in 🐐 status. pic.twitter.com/R6v6eGFv8p

The Lakers have an interesting offseason ahead as they recover from the bubble, but are 5-1 favorites to win the title next season.

Read More
Basketball, NBA
No matter how many titles LeBron James wins, he'll never escape the continuous stream of commentary from those determined to somehow downplay his greatness.