Trade rumors have been heating up all around the NBA despite the deadline being two months away. The Los Angeles Lakers find themself at the center of many of the biggest trade rumors. The team doesn’t have a ton of appealing tradeable assets thanks to the offseason’s Russell Westbrook trade, but there is one player who could get them a solid return.

According to NBA insider Jordan Schultz, there are up to seven teams that are looking at a possible trade for Talen Horton-Tucker. Schultz says the Lakers aren’t overly enthusiastic about trading the young guard but are at least somewhat open to it.

Talen Horton-Tucker has become a trade target of as many as seven teams, league sources say. It will take “a lot” to get him though, I’m told. #Lakers, who really value THT, are hesitant. He just turned 21 and is averaging a career-best 11 PPG, 5 RPG and 3 assists.

The 21-year-old guard is having a decent season as he’s averaging 11.3 points a game and has started in 12 of 15 games played. However, there are players who could make more of an impact for the Lakers right now. Considering they are in win-now mode, they may have to move the exciting young guard. There are some intriguing trade packages the team could make.

Prior to trading for Westbrook, Sacramento Kings guard Buddy Hield was almost a Laker. The trade between the two teams was almost finished before general manager Rob Pelinka shifted towards making Westbrook a Laker. Fans have bemoaned this decision as Hield is a much better fit alongside Anthony Davis and LeBron James.

Pretty much any trade the Lakers can make for an impact player will have to start with Horton-Tucker and Kendrick Nunn. Hield is having a down season as he’s only averaging 35% from three. That could lower his trade value and make it easier for the Lakers to deal. They could consider packaging Horton-Tucker, Nunn and Malik Monk to Sacramento for Hield. The Lakers would have to give up almost all of their youth but Hield gives them a great third or fourth scoring option for the team.

T.J. Warren Gets out of Indiana 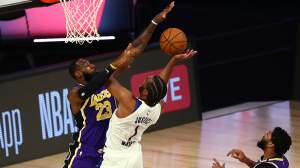 The Indiana Pacers are ready to start their next rebuild and could be shipping off many of their best pieces. The Lakers would be wise to take a look at that situation. T.J. Warren is the most interesting piece Los Angeles should be in on. He’s a good wing defender and averages 15.5 points a game. He’s not much of a 3-point shooter, which is an issue, but his defensive ability makes up for it.

Once again, Nunn and Horton-Tucker would have to be part of the deal. Warren is only making $12.7 million this season so it would be easier to make his money work than Hield. Nunn and Horton-Tucker for Warren and Justin Holiday could be a fair deal. The Lakers may need to throw in a minimum player like DeAndre Jordan in the deal to make that deal work.

On Monday, Shams Charania of The Athletic reported that the Lakers have spoken to the Detroit Pistons about a trade for forward Jerami Grant. He’s another defensive impact player who can be the third or fourth-best scorer on the team. He’s making $20 million a year so it will be another deal involving Nunn and Horton Tucker.

The Lakers would need to add a minimum player to make the deal work. Nunn, Horton-Tucker and Kent Bazemore for Grant could be an appealing deal for the Pistons.

READ NEXT: LeBron James Reacts to Lakers HBO Series Amid Rumors of Controversy

Loading more stories
wpDiscuz
0
0
Would love your thoughts, please comment.x
()
x
| Reply
It's going to take a lot to get the Los Angeles Lakers to trade their best young piece.