The Brooklyn Nets don’t appear to be any closer to finding a trade for 12-time NBA All-Star and former league MVP Kevin Durant. For Miami Heat fans, the standstill can be viewed in one of two ways.

Some would say that it’s cause for celebration; proof positive that Pat Riley is keeping his club in the game despite the unique challenges he faces in putting a package together to pry Durant from the Empire State. Others, however, are simply lumping Miami in with the multitude of teams that have tried and failed to entice Nets GM Sean Marks into making a deal.

Ultimately, there’s truth in both perspectives. The only certainty is that KD continues to be rostered by the Nets, his recent trade request notwithstanding.

It leads one to wonder: what exactly will it take for someone to land Durant? SB Nation examined that very question, taking stock of teams’ “best offers” to get KD and evaluating those packages individually.

Alas, the Heat didn’t fare particularly well in the exercise.

In attempting to identify what the Heat could send out for the future Hall of Famer — and still have it make sense in terms of chasing a title — SB Nation’s Ricky O’Donnell landed on the following trade proposal:

Seeing as how Jaylen Brown, Derrick White and at least one pick were all on the table as the Celtics weighed a KD move during summer league, per The Athletic‘s Shams Charania, and the Nets still said no, it’s hard to feel good about the aforementioned Heat package sealing the deal.

“It’s hard to see how a deal built around Herro has enough juice to get the job done, especially because Miami has limited draft capital to trade. The Heat will have to get creative to land Durant, but Pat Riley usually finds a way.”

It was rightfully noted in the SB Nation piece that including Bam Adebayo in a Durant trade is (or would be) a no-brainer. The 2020 All-Star is a player who Brooklyn would almost certainly have a level of interest in. However, league rules actually prohibit Adebayo from being traded to the Nets as constructed.

Under the current CBA, teams are only allowed to trade for one player who has been signed via the designated rookie extension. And Brooklyn already has its man in former No. 1 overall pick Ben Simmons.

So, in order to get Adebayo to Brooklyn, the Heat and Nets would have to get another team in on the action to absorb Simmons’ contract. That’s probably a tall order given the fact that the former No. 1 overall pick hasn’t appeared in a game since the 2021 playoffs and, all the while, questions about his physical and mental state have abounded. 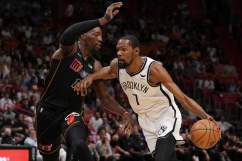 Loading more stories
wpDiscuz
0
0
Would love your thoughts, please comment.x
()
x
| Reply
Is the Miami Heat's "best" offer for Kevin Durant enough to pluck the star from the Brooklyn Nets?