Getty Gordon Hayward #20 of the Charlotte Hornets looks on during the first quarter against the Philadelphia 76ers at Wells Fargo Center on January 12, 2022 in Philadelphia, Pennsylvania.

After a month of the Miami Heat‘s aggressive attempts to land either Brooklyn Nets forward Kevin Durant or Utah Jazz guard Donovan Mitchell, the team is at a standstill. The Nets’ insanely high asking price for Durant has made it impossible for the Heat to land the 12-time All-Star and they still don’t have enough assets to snag Mitchell.

While it seems Miami has no choice but to run it back with their current roster, as they don’t have the cap space to add another player assuming veteran Udonis Haslem returns, an NBA executive told Heavy Sports’ NBA insider Sean Deveney that the Heat will have a “Plan B” in place.

“I think a guy they will keep an eye on is Gordon Hayward,” the exec said of the Charlotte Hornets’ 6-foot-7 All-Star forward.

“Charlotte’s in a tough position with the (Miles) Bridges thing, they have (Steve) Clifford coming in, they’re in a position to rest things a little bit around LaMelo Ball. Hayward has two years left,” the exec continued.

“If you want to give up [Tyler] Herro before you pay him and you want to move [Duncan] Robinson, you would have to add a pick, but those two guys and Omer [Yurtseven], that might be enough to get Hayward if the Hornets decide to reconfigure. It’s a short-term move for Miami, but they need to make their move now. You can play him at the 3 and go big or go small at the 4. He’s a guy they’ve had interest in before.”

Averaging 23.1 PPG, watch the best of @gordonhayward with the @hornets thus far!

Hayward signed a four-year, $120 million contract with the Hornets in November 2020, per Spotrac.com. Before suffering a season-ending ankle injury in February 2022, Hayward averaged 15.9 points, 4.6 rebounds, and 3.6 rebounds, per game.

While offering Herro up for a 32-year-old forward with an extensive injury history seems like a stretch, Hayward could fill the void left by forward P.J. Tucker.

As the exec mentioned, Hayward has been linked to the Heat before, as the former Utah Jazz free agent took a meeting with team president Pat Riley and head coach Erik Spoelstra back on July 1, 2017.

During an interview with ESPN’s Adrian Wojnarowski, Hayward revealed that after the meeting, he texted his wife Robyn and agent Mark Bartlestein to say that he would likely be taking his talents to South Beach.

“I think the text that I sent to Mark was, ‘Wow, that’s going to be really tough to beat,’ or something like that,” Hayward revealed on The Woj Pod., as reported by Sun Sentinel’s Ira Winderman. “I asked Robyn and she said something like she could see herself living there, that would be a really great place for us to be.”

Riley’s pitch was so strong that it gave him “chills,” the 32-year-old Butler alum said. “And everyone’s wearing their ring, too, everybody on the staff was. And so that’s the moment where you’re like, ‘Wow, that’s really cool,’ an I-want-to-put-on-the-jersey-right-now type feeling.” 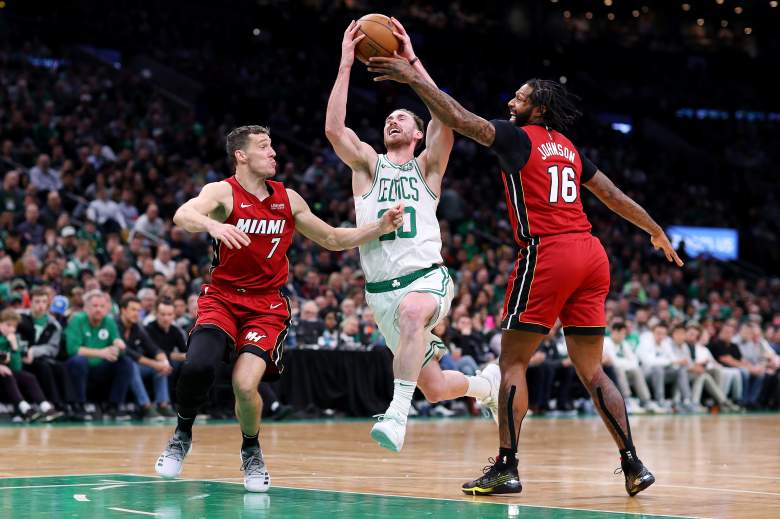 GettyJames Johnson #16 of the Miami Heat defends a shot from Gordon Hayward #20 of the Boston Celtics during the second half at TD Garden on April 01, 2019 in Boston, Massachusetts.

While the Heat ultimately lost out on Hayward, he signed with the Boston Celtics four days later, it was not an easy decision to make. “Miami was the spot that the more and more we talked about it, the more and more it looked like this would be a really, really good fit for me,” he said.

Discussing it over with Bartlestein, “We actually broke it down and had like a point system of different pros and cons and on a weighted scale of different things that each city would represent and each team would represent, and Miami was always near the top of the rankings when we did it.” 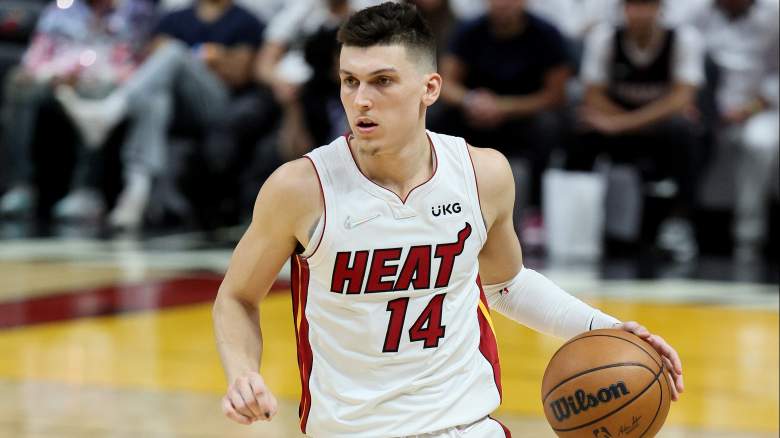 If the door seems closed on the Heat making a trade before the season starts, especially for Durant and Mitchell, not everyone is buying it. Hot Hot Hoops’ analyst Naveen Ganglani tweeted, “I don’t buy that the current Heat roster is what they plan to go with, esp with Duncan Robinson’s contract there. Maybe it’s a message to other teams they’re not desperate to make a trade, which they shouldn’t be. There will be chances to make other deals. Patience is key.”

Winderman shared a similar sentiment on July 27, as there’s still plenty of time for negotiations to continue. “Liking your roster doesn’t mean you are done,” Winderman wrote. “And that, especially at this time of year, with two months remaining before the start of training camp, is a significant delineation.”

“That will be if and when they sign off on a contract extension with Tyler Herro.
Because at that point, based on their limited supply of tradable assets, is when they would be sending the ultimate signal, one with ultimate transparency.”

Once Herro gets paid, he’ll basically become untradeable and the Heat can no longer make a competitive offer.

READ NEXT: Heat Star Reacts to Jimmy Butler’s Dreads: ‘What the F***’ [WATCH]