Getty Kevin Durant #7 of the Brooklyn Nets scores against Duncan Robinson #55 of the Miami Heat during their game at Barclays Center on October 27, 2021.

The ongoing saga with the Miami Heat‘s pursuit to land Brooklyn Nets superstar Kevin Durant has not just trying for fans, but for the team’s front office. Nearly a month has passed since the 12-time All-Star first requested a trade out of Brooklyn and named the Heat as one of his top destinations, but things remain at a standstill.

Brooklyn’s insanely high asking price for the 33-year-old forward has made it impossible for the Heat to land Durant, along with any other interested team. With the Nets playing hardball, the Heat have drawn a line in the sand when it comes to how far they will gut the team to land the two-time Finals MVP.

The Heat would still love to get Durant to South Beach, but they are putting their aggressive efforts on hold until Nets general manager Sean Marks shows some wiggle room in the asking price. The Heat is “disinclined” to part ways with All-Star Bam Adebayo, as reported by Miami Herald’s Barry Jackson and Anthony Chiang, so “while the team remains interested in Kevin Durant, the Brooklyn Nets have displayed little interest in the Heat’s offer for the high-scoring superstar and Miami is moving ahead with its current roster for next season, according to sources briefed on the situation.”

GettyKevin Durant #7 of the Brooklyn Nets dribbles against Jaylen Brown #7 of the Boston Celtics during Game Three of the Eastern Conference First Round NBA Playoffs at Barclays Center on April 23, 2022 in New York City.

After ESPN’s Adrian Wojnarowski reported that the Boston Celtics offered a trade package to the Nets centered around All-Star forward Jaylen Brown, it seemed Miami no longer had any chance to snag the former league MVP, especially becuase Brooklyn turned down the offer which included “Brown, guard Derrick White and a draft pick.”

As Bleacher Report’s Jake Fischer reported on Tuesday, the Celtics’ offer to the Nets was made during Summer League play in Las Vegas weeks ago. Since then, Boston hasn’t made any more progress than the Heat when it comes to landing Durant. It’s an all-around lull.

An executive told Heavy’s NBA Insider Sean Deveney that they believe the Celtics’ trade leak came directly from the Nets. “The timing is the strange part, you know? It’s pretty clear this is something that came from the Nets,” the executive said, noting the leak likely caused some major unrest in Boston.

“There’s no way the Celtics wanted any of this to come out. Now it is something the Celtics have to deal with, they have to put things together with Brown, there will be a whole bunch of questions out there in training camp and into the season.”

The Heat’s ‘Pause’ Is Likely a Negotiating Tactic 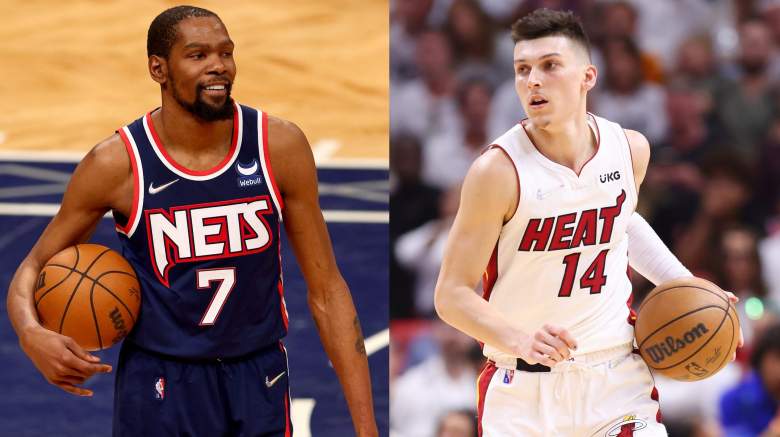 Because the Heat’s interest in Durant dates back to 2016, and the fact that the team needs a starting power forward, it seems Miami is playing a little hardball, too.

After the Miami Herald’s report was released, Hot Hot Hoops’ analyst Naveen Ganglani tweeted, “I don’t buy that the current Heat roster is what they plan to go with, esp with Duncan Robinson’s contract there. Maybe it’s a message to other teams they’re not desperate to make a trade, which they shouldn’t be. There will be chances to make other deals. Patience is key.”

Sun Sentinel’s Ira Winderman shared a similar sentiment on Wednesday, July 27, as there’s still plenty of time for negotiations to continue. “Liking your roster doesn’t mean you are done,” Winderman wrote. “And that, especially at this time of year, with two months remaining before the start of training camp, is a significant delineation.”

Loading more stories
wpDiscuz
0
0
Would love your thoughts, please comment.x
()
x
| Reply
The Miami Heat have drawn a line in the sand when it comes to working out a blockbuster trade for Nets' star Kevin Durant.