The Miami Heat‘s point guard Kyle Lowry is not just teammates with Jimmy Butler, the two are best friends. So, when the six-time All-Star discussed Butler’s new extensions during an interview on ESPN’s The VC Show with Vince Carter, he was able to give his brutally honest opinion on the drastically new long-haired look like few others would be brave enough to do.

When Carter, a former eight-time NBA All-Star, says he’s heard about the braids but hasn’t seen them, Lowry’s face gives a warning that says it all. “My man, my dawg, my brother,” Lowry says of Butler, before giving his true feelings on the hairdo. “I talked to him on Facetime on Tuesday and I was just like ‘What the f***?! You got dreads?'”

While the 36-year-old point guard was clearly not feeling the look, Butler remained unfazed. “‘It’s on fire, yo’ he said,” Lowry told Carter. “I said, ‘Bro, come on.’ But if anyone knows Jimmy, Jimmy’s gonna do whatever Jimmy wants to do,” comparing him to Eddie Murphy’s portrayal of James Early in the 2006 film, Dreamgirls. “Jimmy’s got SOUL!” Lowry says.

“Jimmy’s gunna do whatever the f*** Jimmy wants to do.”@Klow7 is NOT feelin @JimmyButler’s new dreads 😂 pic.twitter.com/GfgpModB2B

After Carter gets a look at Butler’s hair himself, the former NBA star looks completely shocked and Lowry can’t stop laughing.

While Butler reinvented his hairstyle this summer, Lowry recently went through a transformation of his own. The veteran appeared overweight and out of shape throughout the postseason, which Heat president Pat Riley addressed during his annual end-of-season press conference.

“The bottom line with me and for me as far as hoping that you can get the most out of a player — is that you got to be in world-class shape. You just have to be,” Riley said almost as a warning to Lowry on June 6, while also noting “I do think that he can be in better shape next year.”

This sentiment was mirrored by an Eastern Conference executive while speaking to Heavy.com’s Sean Deveney during Summer League in Las Vegas. “It is easy to pile on him for his conditioning but that’s never been Kyle Lowry, he is a pro all the way,” the exec said. “He was hurt and that affected his ability to get into the kind of shape he wanted to be in. I think everyone knows that, including the Heat, they just want to push him a little harder. He is older, he has a ring, you’ve got make sure he is still hungry.”

“The stuff Riley said about conditioning, that is what it is all about,” he added. “Motivation, keeping that motivation going.”

Getting personally called out by “The Godfather” must’ve been motivation enough because recent photos and videos of Lowry training show him looking absolutely jacked.

While Lowry rarely posts on his personal Instagram and Twitter pages, videos of his workouts with NBA trainer Travis Wallace have gone viral on both social media apps.

Kyle really abt to be in the best shape of his life. #HEATCulture pic.twitter.com/cH3iOOHJkm

Heat Nation was thrilled to see Lowry putting in the work. A popular fan account tweeted, “The league isn’t ready for a ripped Kyle Lowry 🔥.”

Lowry Has Been Lying Low Amid Trade Reports 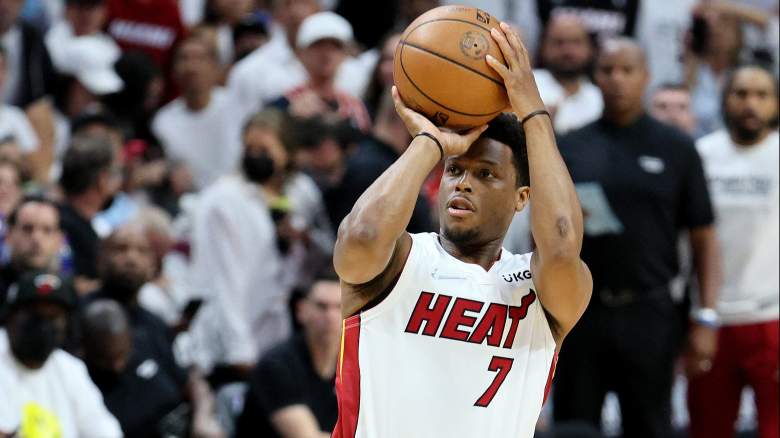 GettyKyle Lowry #7 of the Miami Heat shoots a three point basket against the Boston Celtics during the first quarter in Game Five of the 2022 NBA Playoffs Eastern Conference Finals at FTX Arena on May 25, 2022 in Miami, Florida.

While the Heat’s been heavily linked to landing Brooklyn Nets superstar Kevin Durant this offseason, Lowry has kept his down amid the flurry of reports. NBA insider Brandon “Scoop B” Robinson of Bally Sports s floated the veteran’s name as a key part of the Heat’s possible trade package to land either Durant or Kyrie Irving during an appearance on The Wheelhouse earlier this month, but the former Raptors star is most likely staying put.

It’s hard to imagine Butler would be okay with Lowry, the godfather of his only daughter, being shipped off after he worked so hard to bring him to South Beach in the first place.

Lowry, who signed a three-year $85 million contract with the Heat last summer, was one of the main reasons Miami entered the playoffs as the No. 1 seed in the East, and while he fell apart during the postseason, unable to power through a nagging hamstring injury, Lowry likely isn’t going anywhere next season unless Butler is leaving with him, the latter of which seems to be off the table entirely.