Getty LeBron James looks on prior to Game 4 of the 2020 NBA Finals between the Los Angeles Lakers and the Miami Heat.

Despite a desire to boost the team’s star power this summer, Miami Heat president Pat Riley has yet to successfully pry Kevin Durant from the Brooklyn Nets. As it stands, his team seemingly lacks the assets necessary to coax the rival franchise into making a deal.

Whether or not that can somehow be rectified by acquiring more picks/prospects remains to be seen. In lieu of winning the Durant sweepstakes, though, there may be another superstar that the team could bring to South Beach, and we’re not talking about Donovan Mitchell.

On Wednesday, The Ringer‘s Kevin O’Connor examined LeBron James’ situation with the Los Angeles Lakers, questioning whether the former Heat champ should consider following KD’s lead by orchestrating his own exit.

If LeBron does develop a wandering eye, O’Connor sees a scenario where Miami emerges as a potential suitor.

As O’Connor (and most of the hoops world) sees it, LeBron’s Lakers find themselves in the bubble zone of the NBA playoff picture, with little hope of getting back to the contender’s table anytime soon. As such, moving on may be his best course of action, either by way of a trade demand or via free agency next summer.

With that in mind, the hoops scribe ranked James’ best fits from around the Association. And the Heat placed highly on the list, coming in at No. 5 — just one spot behind his other former team, the Cleveland Cavaliers.

4. Cavaliers: Koby Altman and the Cleveland front office have assembled one of the NBA’s best young teams. LeBron could help lift them up, repeating history like he did before but with way more youth on the team.

5. Heat: Ditto here. LeBron could return to Miami to assemble the Heatles 2.0. If the Heat aren’t a match for Durant, they could be for James.

To see LeBron back in Heat black would be a wild turn of events after he previously elected to flee SoFlo at the height of the team’s powers. As O’Connor has observed, though, it would also be an incredibly on-brand move for the King.

“LeBron would be following his own playbook if he did leave,” O’Connor wrote. “Just like he did after four years with Miami, then after four years with Cleveland. LeBron is entering a fifth season now with Los Angeles and the franchise is showing signs of decay, like the Heat and Cavaliers were at the time he left.”

Again, Miami has a dearth of assets with which to pull off a trade currently. But after next season, that’s not something they’ll have to do if James opts not to sign an extension. And, based on what is being reported about his meeting with Lakers brass last week, that’s a distinct possibility.

While contract dialogue was broached, the majority of the hour-long meeting was about expressing concerns, and hearing out strategies and opinions to assure there wouldn’t be a repeat of last season’s epic failure… 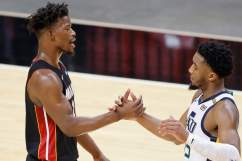 Loading more stories
wpDiscuz
0
0
Would love your thoughts, please comment.x
()
x
| Reply
There continues to be a level of chatter about one of the greatest players in Miami Heat history returning to the franchise.