Getty P.J. Tucker #17 of the Miami Heat plays against the New York Knicks at FTX Arena on January 26, 2022 in Miami, Florida.

It’s been less than a month since forward P.J. Tucker left the Miami Heat in free agency to sign with the Philadelphia 76ers, but unfortunately, it appears the 37-year-old is having some medical issues during the offseason.

The veteran shared a photo on his Instagram stories on Friday, July 29, that shows him wearing a hospital gown, an alarming concern for his 1 million followers on the social media app. Tucker didn’t write a caption for the picture. He merely shared the photo with a fingers-crossed emoji. 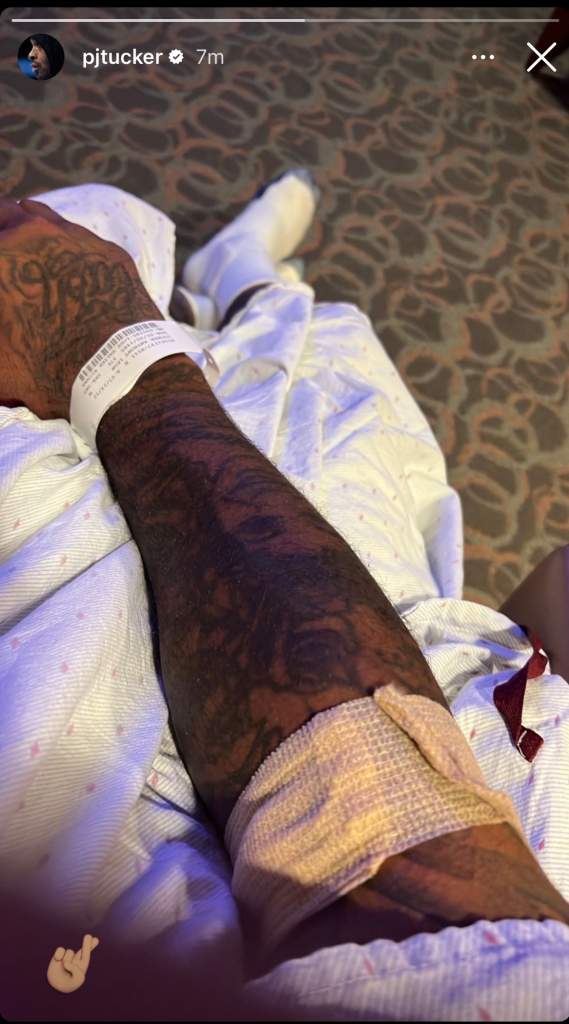 @pjtucker via InstagramP.J. Tucker shares a photo from the hospital on his Instagram stories.

His full name, Anthony Leon, can be seen typed on the wristband as well as Friday’s date. No other details were given by the former Heat fan-favorite, but hopefully, everything turns out okay for Tucker.

Money Was the Ultimate Factor in Tucker’s Decision

Tucker officially inked his three-year, $33.2 million contract on July 6, expressing his confidence in choosing to join the Sixers.

“This team is good enough to compete head-to-head with anybody in the league, and I’m going to come in here and do whatever I can to help get us to that next level,” Tucker said, according to a tweet by Sun Sentinel’s Ira Winderman. “Philly fans demand greatness and it will be up to us to get to where we need to be.”

welcome to the city of brotherly love, P.J. Tucker!

Ultimately, more money and a multi-year deal were Tucker’s main priority, which is not unusual for a player who will be 38 when the 2022-23 playoffs arrive.

As for the Heat’s final offer, the front office drew a firm line as to how far they would go to keep Tucker, according to the Miami Herald’s Anthony Chiang on June 30.

The Heat, he wrote, were “willing to offer Tucker a fully guaranteed contract for the maximum-allowable three years using the non-Bird exception,” saying a deal would have included “a starting salary of $8.4 million and [and have been] worth about $26.5 million through three seasons.” In the end, Chaing wrote, the Heat were not “willing to use the $10.5 million non-taxpayer midlevel exception to re-sign Tucker, according to sources, which would allow Miami to offer him a three-year contract worth about $33 million.”

Everyone in the league is getting a bag while James Harden is revolving his contract around what works best for the team. Never say this man doesn't care. pic.twitter.com/aPyYHGEr8h

Initially, the Sixers didn’t have the money either. That is until All-Star James Harden, who was traded to Philadelphia halfway through the 2021-22 NBA season, agreed to restructure his deal.

ESPN’s Adrian Wojnarowski tweeted on June 29, “Harden has declined his $47.3M option and become a free agent. He keeps real the possibility of negotiating a new deal that would deliver the Sixers roster-building flexibility in free agency – including use of the full $10.5M exception.”

Only July 27, Harden officially signed a restructured, two-year, $68.6 million contract with a player option in the second year,” as reported by NBC Sports‘ Kurt Helin. “That player option has led to speculation that [Sixers general manager Daryl] Morey and Harden had a wink-and-a-nod deal that Harden could opt out in the second year and make a lot of that money back — but the former MVP will have to play at a high enough level to earn that big payday.” 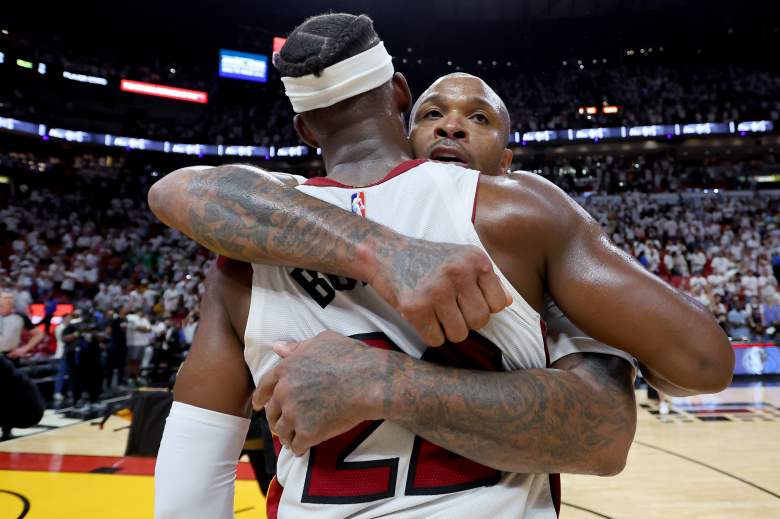 GettyJimmy Butler and former teammate P.J. Tucker celebrate a win over the Boston Celtics in the Eastern Conference finals.

After Tucker shared a heartfelt farewell post on Instagram on July 6, Heat leader Jimmy Butler wrote: “F*** you and @joelembiid yeah I brought him into this 🤷🏿‍♂️.”

The six-time All-Star, who’s tight with Embiid, likely made the NSFW comment in his signature raw style of humor, but it’s also likely he’ll genuinely miss having Tucker in Miami. For a guy who famously “doesn’t like anybody,” as Warriors star Andre Iguodala said, Butler actually  adored Tucker.

READ NEXT: Heat Star Reacts to Jimmy Butler’s Dreads: ‘What the F***’ [WATCH]