The New England Patriots have traded popular linebacker Chase Winovich to the Cleveland Browns for Mack Wilson in a trade that marks a bit of an alteration in defensive philosophy for Bill Belichick.

Trade! The #Patriots are sending OLB Chase Winovich to the #Browns for LB Mack Wilson, per sources.

Winovich is a pure pass rusher who has struggled to make an impact in other aspects of the game. His lack of versatility seemed to hurt his playing time over the past two seasons. There is a chance Winovich can find his happy place with the Cleveland Browns, perhaps playing a role similar to what Jadeveon Clowney played in 2021 opposite the monstrous Myles Garrett.

What Are the Patriots Getting in Mack Wilson?

In Wilson, the Patriots get another Alabama product. The pipeline between Nick Saban’s program and his good friend Belichick’s pro squad continues.

At 24, Wilson is three years younger than Winovich, who turns 27 in April, but the former is also a lighter, quicker inside linebacker. At 6’1″ 233 pounds, Wilson is the kind of athletic off-ball guy the Patriots have lacked in the middle.

Here is a quick scouting report for Wilson offered by Taylor Kyles of Next Gen Stats:

Wilson’s arrival likely ensures Dont’a Hightower won’t be back and Ja’Whuan Bentley may well be moving on too. Hightower and Bentley are heavier inside linebackers who were a bit exposed in 2021 by mobile quarterbacks, shallow cross routes and any intermediate passes where they were tasked with covering throws in space. In January, the Boston Herald’s Karen Guregian wrote about the Patriots’ need to find faster and more athletic linebackers.

This appears to be a step in that direction.

The decision to move Winovich isn’t a major surprise. A change of scenery seems to be the best move for him at this stage of his career. Musket Fire’s Jerry Trotta called for the Patriots to trade Winovich four months ago.

“Chase Winovich has never felt like a long-term fit with the Patriots,” Trotta wrote back in November 2021.

“While the 2019 third-round pick always seems to make an impact as a pass-rusher, he’s only useful in that department. That’s why he’s barely played 35% of the defensive snaps over the first 38 games of his career. Facing a make-or-break season following the Patriots’ record-setting free agent spending spree, Winovich has managed just seven tackles and one QB hit. He missed almost all of training camp with an undisclosed injury and just landed on injured reserve with a hamstring injury he sustained in Week 6. It’s unclear what New England could get in return for Winovich, but at this point they should take anything in the range of a fourth-, fifth- or sixth-round pick.”

Winovich recorded 5.5 sacks in each of his first two seasons with the Patriots. However, in 13 games in 2021, Winovich didn’t record a single sack. The arrival of Matthew Judon and the return of Kyle Van Noy bumped Winovich down on the depth chart.

Winovich’s injuries were a further impediment. Upon learning of his trade to the Browns, Winovich wrote a heartfelt message to Patriots Nation and posted it on Twitter:

I am so grateful for my experience in New England.
The love, spirit, and support have been absolutely unreal.
This entire region will always hold the most special of places in my heart.
The time is now for the next chapter of my journey.
📖💓✌🏻🍯

He also quickly embraced the concept of joining the Browns as he found common ground with new teammates and old ones he’ll be rejoining after playing with them in college at Michigan.

Winovich also posted an image of himself as a kid wearing a Browns jersey on his Instagram story. 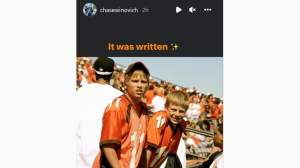 Winovich will leave Foxborough as a player fans seemed to have loved, but it is also difficult not to wonder what might have happened had he gotten more of an opportunity to utilize his specific skill set.

As it is, Patriots Nation is hoping Wilson helps inject some much-needed energy and athleticism. Also, it is a good sign to see the Patriots making some fundamental changes to their philosophy in an effort to progress with the sport.

Loading more stories
wpDiscuz
0
0
Would love your thoughts, please comment.x
()
x
| Reply
The Patriots have traded popular linebacker Chase Winovich to the Browns for Mack Wilson in a trade that marks an alteration in defensive philosophy.