Getty Daniel Jones #8 of the New York Giants is hit by Jabril Cox #14 of the Dallas Cowboys.

While Saquon Barkley’s low ankle sprain may prove to be the longest lingering injury to hit the New York Giants in Week 5, it was far from the only one. The G-Men were dealt a handful of prominent blows to their roster in their 44-20 loss to the Dallas Cowboys. Wide receiver Kenny Golladay missed the entire second-half after originally hurting his knee in the first quarter. As for the man typically throwing him the football, he failed to make it out of the first half healthy.

Daniel Jones was carted to the locker room with less than three minutes left in the second quarter after taking a nasty hit to the head while trying to break the goal line as a runner. The third-year quarterback came up wobbling and was quickly escorted off the field, being ruled out for the remainder of the game shortly after.

In an act of kindness, Cowboys safety Jayron Kearse was captured on camera rushing over to Jones’ aid once he saw the quarterback stumbling (h/t Rex Chapman). Unfortunately, Jabril Cox, the Cowboys defender who delivered the hit on Jones, has since failed to demonstrate similar sportsmanship and class.

The rookie linebacker took to Instagram to gloat about his hit on the Giants signal-caller, sharing a shot of the play to his IG story (h/t @LWOSgoatsaquon on Twitter). The image, which can be seen below, was captioned “giving out concussions!!!” accompanied by an emoji with head bandages. 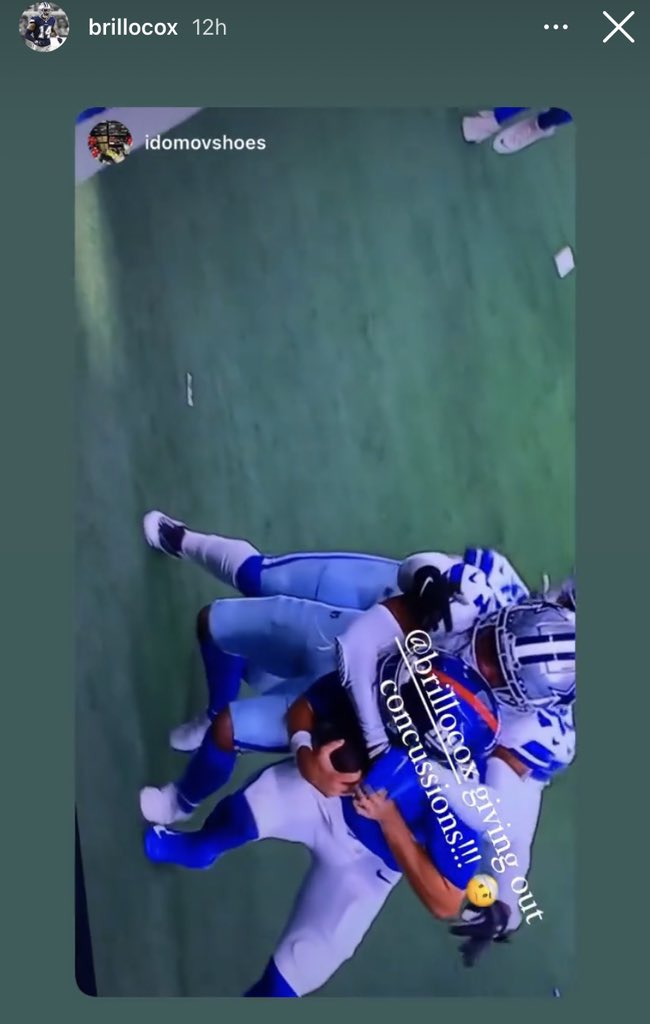 The hope in East Rutherford is that Jones can clear concussion protocol in time for a Week 6 battle with the 4-1 Los Angeles Rams on Sunday. Yet, head coach Joe Judge refused to get into any “medical diagnosis” while speaking to reporters about his starting quarterback following the Dallas loss.

Judge did dig a bit deeper on Jones’ replacement, Mike Glennon. The second-year head coach praised the veteran quarterback, claiming Glennon “did some really productive things” after completing 64% of his passes with one touchdown and two interceptions against the Cowboys. He told reporters on October 10:

Mike can run the offense. It’s a simple as that. Our deal is when a guy gets in, we’re going to go ahead and stick to the game plan as much as we can, because there’s always maybe a curve ball here or there for a specific player. Yeah, there’s things within the game plan you kind of pencil in for a certain receiver, tight end, running back, maybe even the quarterback. But I’d say, in terms of Mike, the plan would be for him to just go out there and run the offense. Mike does a good job of preparing. I thought in terms of the eyeball test that him getting out there today, there was a lot of things he did well, a lot of positions he put us in with a chance to have success. Mike’s had a lot of experience. In terms of how he comes to work to prepare every day as if he’s going to take every snap, I thought that showed up on the field today in terms of how he performed.

Hope someone breaks his legs that POS gloating about something like that.