Ever since Colin Cowherd took to the FS1 airwaves in 2019 claiming Russell Wilson could be East Rutherford bound, Giants fans have held out a glimmer of hope that No. 3 could one day be lining up under center — even if it seemed farfetched.

While Daniel Jones’ play early this season helped quiet talks of the team needing to upgrade their quarterback position, a 1-5 start and a four turnover outing in Week 6 has once again turned those talks up to full volume. Now, factor in NFL Insider Jay Glazer (via Bleacher Report) stating in early October that he expects Wilson to “a million percent” attempt to force his way out of Seattle this offseason, and the inevitable theorizing amongst fans linking the eight-time Pro Bowler to Big Blue has begun to pick up some steam on social media.

One take, in particular, garnered the attention of former Dallas Cowboys wideout Dez Bryant, who — in a now-deleted tweeted — responded to a fan by weighing in on the possibility of Wilson joining the Giants, as well as the talent of the team’s roster and the questionable coaching currently residing in New York. 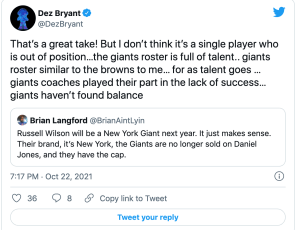 Whether it was simply an opportunity to toss a bit of shade the way of his former head coach Jason Garrett, who has fallen flat on his face as the Giants offensive coordinator, is up for debate. With that said, it’s tough to argue with Bryant here. The team’s roster is by all means “talented,” as they have 18 players on their roster who are either former first-rounders or have been named to a Pro Bowl.

The problem is, they’ve failed to address the trenches properly, especially on the offensive side of the football. In return, they’ve been unable to get the most out of their high-priced/highly drafted weapons. With that in mind, chances are Wilson would likely steer clear of the Giants — especially after years of being battered and bruised behind a Seahawks offensive line that has struggled similarly to protect their quarterback.

For what it’s worth, Wilson’s agent Mark Rodgers told ESPN in February that Wilson would consider a trade to the Cowboys, Chicago Bears, New Orleans Saints or Las Vegas Raiders. With Dak Prescott proving to be back at full strength and the Bears turning their offense over to rookie first-rounder Justin Fields, chances are the first two teams are out of the market. As for the Saints and Raiders, both Jameis Winston and Derek Carr have shown promise this season, but it wouldn’t be out of the question if either team entertained the idea of moving off their starter in the offseason — especially following Jon Gruden’s exit from Vegas.

Giants Back in the QB Market?

Bleacher Report’s Chris Roling believes so, listing the Giants amongst the six teams “most likely” to find their new quarterback in the upcoming 2022 NFL Draft.

Yes, Jones has visually improved leaps and bounds in year three despite an inordinate amount of injuries to his supporting cast. However, at some point, he needs to start putting Ws in the win column if he hopes to keep his job under center. If the Giants continue down their current trajectory this season, chances are GM Dave Gettleman is gone and Joe Judge could possibly be canned as well (a nearly unfathomable move entering this season).

If a new regime is put in place, they’ll almost certainly want to either sign, or more likely draft, their guy. And with a projected top-five pick at their disposal, Roling has zeroed in on a few possibilities.

“The Giants will have until May 3 to decide whether to exercise their fifth-year option on Jones. But if they aren’t sold on him as their long-term answer and land a top-five pick, it would make sense for them to grab the top passer on the board, whether that’s Matt Corral or North Carolina’s Sam Howell,” the B/R columnist wrote.